Inger Dam-Jensen, Poul Elming, Elisabeth Zeuthen Schneider, Bohumila Jedlickova, Nina Gade, Hans Fagius, Tre Musici, Lund Student Singers, Danish National Symphony Orchestra, Michael Schønwandt, Thomas Dausgaard
J.P.E. Hartmann (1805-1900) composed music throughout eight decades and was greatly admired by Grieg, and a stylistic inspiration for Nordic national romanticism. Hartmann took centre stage in the wake of the old Danish masters Weyse and Kuhlau and became the prime exponent of Danish ‘national’ music. The finest examples of this can be found in among other works the remarkable piano sonatas, the masterly theatre overtures and the opera Little Kirsten, judged at the time to be the very essence of Danishness.
Buy album Stream 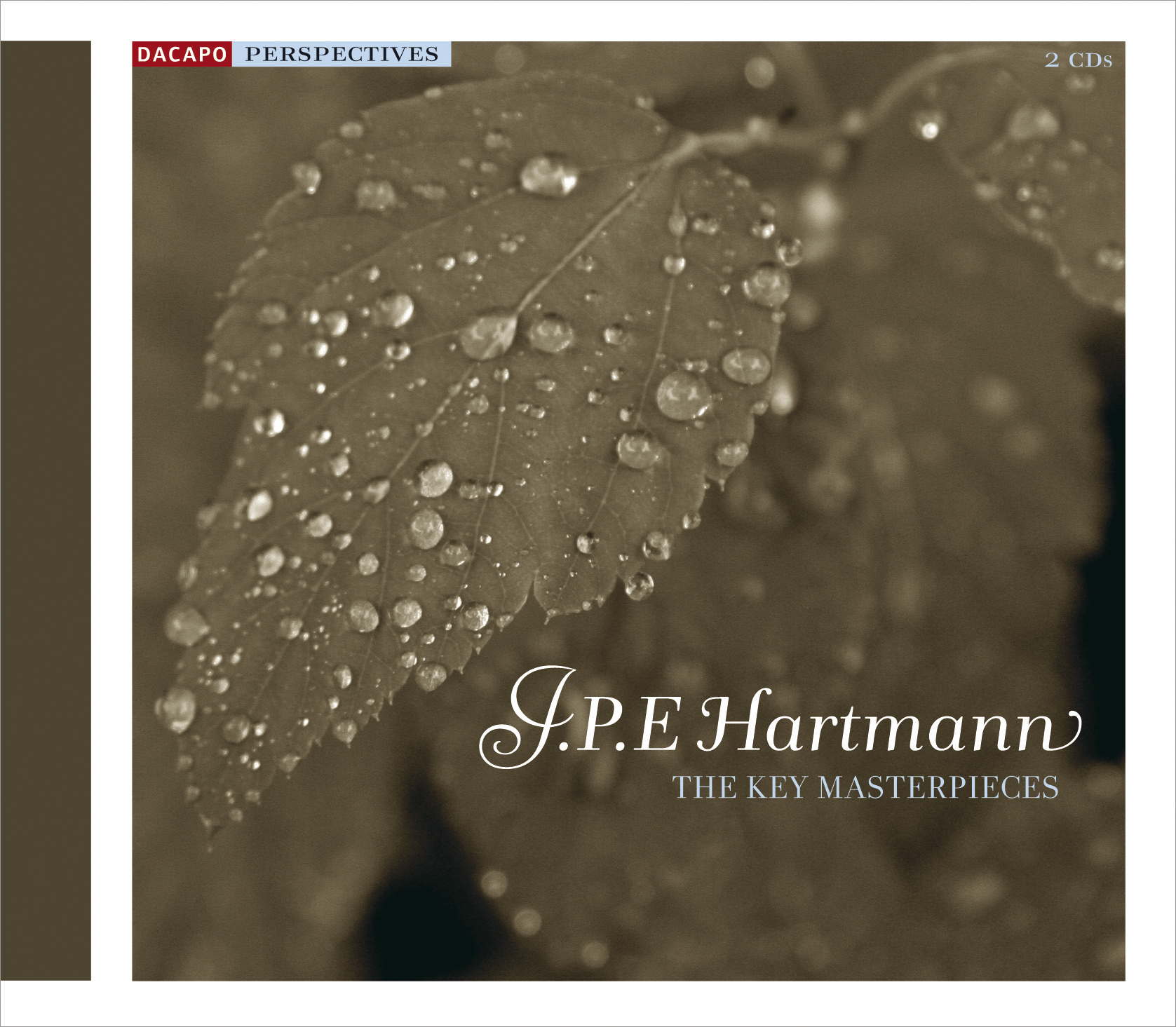 When Danishcomposer Johan Peter Emilius Hartmann was born in 1805, Napoleon had just beencrowned as Emperor and Haydn was being hailed for his new oratorios, The Creation and The Seasons.

When Hartmann died in 1900, a tele­phone had been installed in hisapartment and electric lamps illuminated Copen­hagen, the city of his birth. InVienna, Mahler and Schönberg now ruled supreme within the world of music. Andtowards the east, young Stravinsky and Bartók were on the rise.

Growing old isan art in itself, but leading a full life requires a master. And in thisrespect Hartmann was quite special. He dominated most of the nineteenth centuryand naturally became a beacon within Nordic music. He worked as a composer foreight decades and held a position as organist until he was 76 years of age (!).He took on all kinds of teaching, administrative and organisational taskswithin the Danish music scene, and over the 43 years of his career also pursueda career as a civil servant. As a composer he became the leading proponent ofNordic National Romanticism\. His Norwegian admirer, Edvard Grieg, expressedit in the following terms in celebration of Hartmann's eightieth anniversary in1885:

The best and deepest thoughts, indeed thoughtsthat have nourished a succession of more or less distinguished younger minds -who but Hartmann was the first to express them and make them echo in us? He isthe poet, the visionary who looks ahead into the future. We are the Nordicyouth, and we have our dreams - but generations ago already, those dreams wereHartmann's too.

Hartmann firstmade an impression on Danish audiences in the 1830s, when the old masters Weyseand Kuhlau were bowing out. Hartmann then became the principal exponent of aDanish national tone, which is prominently exemplified in his overtures tohistorically themed plays and not least his opera Little Kirsten (1848), whichat the time of its creation was seen as embodying the essence of ‘Danishness'.The libretto drew on Danish folksongs and had been created by his good friendHans Christian Andersen. Hartmann's score also reflected the realm of folksong.And in the 1860s, Hartmann, along with choreographer ­August Bournonville,created a series of ballets based on Norse mythology, which in 1872 wasfollowed by Vølvens spådom (‘The Prophesy ofthe Seeress') - scored for male choir and orchestra, it wasreceived in the spirit of a divine message. The setting of the Norse verse madea profound impact and afforded Hartmann status as national hero. Hartmann wasapproaching the ‘age of dust', which they used to call the age around 70, andhe was considered an oracle of wisdom. Poet Christian Richardt expressed inverse the perception of Hartmann as a seer who enjoyed privileged access toancient sources:

he has discovered the words of wizardry.

he weaves for us from Denmark's land.

The National Romantic perception of Hartmann endured after his death.Unfortunately, so did the notion that Hartmann was a ‘local' phenomenon whosemusic never would become international in scope. During such times, duringwhich the sentiments of National Romanticism prevailed, it was even understoodthat only Danes could comprehend Hartmann's music. Now contemporary music researchershave documented the extent of Hartmann's very large international network andthe travels he regularly undertook in Europe, rendering old prejudicesredundant. Strange as it may seem, Hartmann's two symphonies have beenperformed only rarely, even in the half-century during which the composerchaired the Copen­hagen Music Association. Maybe this has to do with the factthat Hartmann's influential son-in-law, Niels W. Gade, wrote eight symphoniesthat not only held their own but were actually seen to embody an exemplary newsymphonic style. One, however, that was different from that of Hartmann, whohad written his Symphony No. 1 in 1835. First performed in Copenhagen in 1836, it was revised around1850, and Hartmann notably wrote an entirely new music for the openingModerato. Hartmann's Second Symphony dates from 1848 and likewise met withscant success - indeed one could say that Hartmann as a symphonist suffered thesame fate as his Swedish peer, Franz Berwald, whose symphonies only achievedrecognition after his death.

Hartmann wrote four remarkable piano sonatas. The earliest, Piano Sonata No. 1 in D minor from 1843, marked his first international breakthrough when it wasawarded a prize at a German composer's competition over which Hartmann's idol,Louis Spohr, presided as member of the jury. Robert Schumann praised it in hisperiodical Neue Zeitschrift für Musik (New Journal for Music) in which he appropriately called Hartmann \\an artist who appeases usthrough the harmony of his powers; an artist who masters form and is not aslave to his feelings; an artist who never fails to move and fascinate us.\\

The yearafter, Leipzig's Gewandhaus Orchestra performed Hartmann's new overture for the play Hakon Jarl (1844), which is a clear example of his Nordic style. In the overture, a ‘pagan' battle motifin the minor is set against a happier ‘Christian' hymn-like theme, and thissymbolises the religious strife between the two Viking kings, Hakon Jarl and Olaf Trygvason. Contrapuntal, original and impressive, Hartmann's Hakon Jarl reveals hisabsolute command of the genre.

Hartmann is univocally hailed as having been a very great improviser at the organ. Perhapsit was this unique talent that rendered superfluous the actual writing down of more than a handful of organ compositions. The Fantasy in Fminor (1837) is considered a classic in the Danish organrepertoire. His chamber pieces only represent a small part of his oeuvre andseveral of these were never finished, such as the Piano Trio in Cminor (1849) of which only the very charming and vivaciousvariation movement was ever completed. However, Hartmann's works for violin andpiano trace his ­gradual development from his Violin SonataNo. 1 of the Viennese school to his more exploratory worksof the 1880s. Somewhere in between you find his lyrical Suite (1864), where sonata form is abandoned in favour of lyrical romantic sentiments.

J.P.E.Hartmann represented the third gene­ration in a Danish musical dynasty foundedby his grandfather, Johann Hartmann, who had left Schleswig-Holstein behind andsettled in Copenhagen. And as a family man, Hartmann founded his own musicaldynasty. Many Danish composers, such as Niels Viggo Bentzon, Jørgen Bentzon,Emil Hartmann, Niels W. Gade, Rued Langgaard, Asger Hamerik, Ebbe Hamerik andAugust Winding, can trace their roots either through their bloodline ormarriage to a single ancestor, the iconic J.P.E. Hartmann.

And beyondfamily ties, Hartmann's late oeuvre inspired - and thus found new form - in theworks of the greatest Danish composer of the twentieth century, Carl Nielsen.That this connection has never been widely recognised is another lamentableresult of the misinterpretation of J.P.E. Hartmann as a composer who wrote only for Danes.