The Little Mermaid; The Will-o'-the-Wisps Go to Town

The Little Mermaid; The Will-o'-the-Wisps Go to Town

Ylva Kihlberg, Inger Dam-Jensen, Helene Gjerris, Bo Kristian Jensen, Gert Henning-Jensen, Jens Albinus, Danish National Girls' Choir, DR BørneKoret, Danish National Concert Choir, Danish National Symphony Orchestra, Thomas Dausgaard, Sun & Moon
When the bicentenary of the birth of the Danish fairytale writer Hans Christian Andersen was celebrated in 2005, the and its chief conductor were at the forefront with a magnificent musical celebration. This CD release testifies to the meeting between Andersen's immortal storytelling art and two leading Danish composers of our time, (b. 1932) and (b. 1958), who interpret the writer in very different ways in two works, each originating in one of Andersen's tales.
Buy album 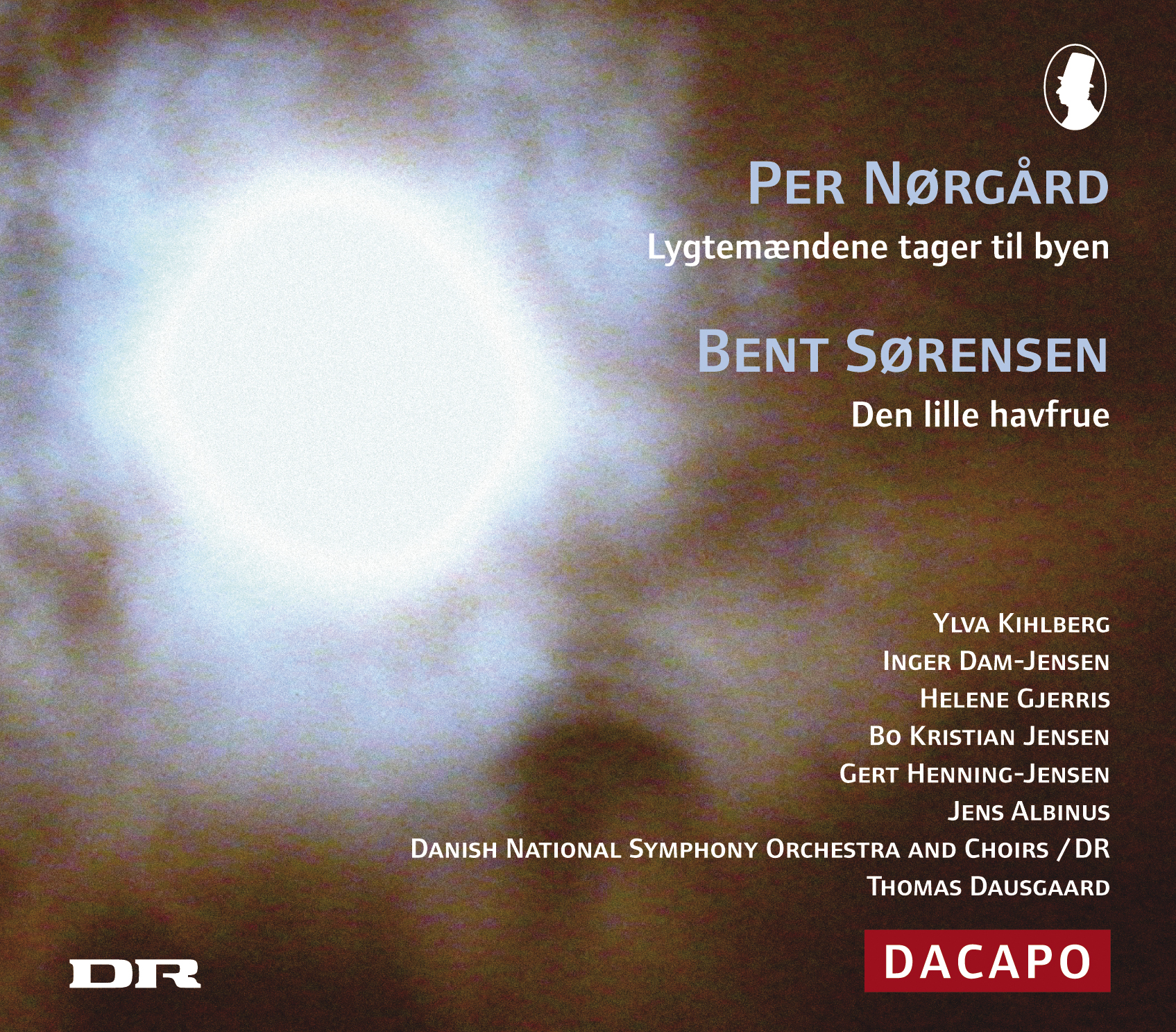 The will-o'-the-wisps that lure lost travellers by night out into the bottomless depths of the marshes recur as an eerie image throughout literature: all the way from Wilhelm Müller's Winterreise, set to music by Franz Schu-bert in the 1820s - where the despairing jilted lover is close to being tempted by them, and even concludes that everything and everyone in the world is an illusion - to the monumental horror of the Dead Marshes in J.R.R. Tolkien's Lord of the Rings from 1954-55.

The will-o'-the-wisps also become the main characters in one of Hans Christian Andersen's last, strangest and darkest tales, which has now formed the basis for Per Nørgård's contribution to the celebrations of the bicentenary of Andersen's birth. Like many other Ander-sen tales, The Will-o'-the-Wisps are in the Town, Said the Marsh Woman (printed in 1865) make a theme of the tale itself and the art of telling it; but in this particular case Andersen gives his usual tribute to inspiration a twist in a strikingly sombre and pessimistic direction.

The main figure in the story is a teller of tales who has lost his inspiration and goes off into the countryside to rediscover it. There he meets the Marsh Witch, who warns him against the will-o'-the-wisps: when the moon stands in a certain way and the wind blows in a particular way, all will-o'-the-wisps born at that moment are entitled to become human beings for one year, and in the course of that time can lead three hundred and sixty-five people astray - can enter into a person and speak for him, and make all the movements they please.\\

So the will-o'-the-wisps no longer just stay out in the marsh, as in the old tales; they have set themselves in motion and gone to the town, have come in to us - perhaps even into us - and against this there is not much a poor poet can do; not even by telling the truth, for as the man in the story himself despondently concludes, \\that will not disturb a single person; for they will all think I'm only telling them a story if I say, ‘The will-o'-the-wisps are in the town, says the Marsh Witch. Be on your guard!'\\

Andersen's tale can be read as acerbic criticism of civilization in the wake of the national disaster of 1864, as a tale about the helplessness of art and morality in the face of modern life's cult of superficially seductive, quick gratification, the soft option and the self-sufficient narrow view. And this is very much how it is read in Per Nørgård's and Suzanne Brøgger's update of the story.

They also add a historical perspective, including references to various musical styles: in the 150 years or so since Andersen wrote, it has only become all the clearer how prophetic the tale of the will-o'-the-wisps is. While the will-o'-the-wisps in Andersen's story are in the town once and for all, Nørgård's and Brøgger's work is just as much the story of how they got there - and how they are no match at all today for the dumbing-down the town already exhibits.

Viewed in this light, the work is by no means only a tribute to Andersen; it is to a great extent also an example of how he can be used in connection with a quite up-to-date, culturally pessimistic critique of society. If there is any Utopian hope, it lies solely in the fact that the fairytale, even in the form of the will-o'-the-wisps, does in fact exist, and that art, the tale and music are still being realized.

In terms of both size and resources The Will-o'-the-Wisps Go to Town is Per Nørgård's biggest work for many years. And on top of this the work, by virtue of its continuous narrative, its gallery of characters, its requirement of a clear scenic distribution of the cast and its striking dramatic effects, can in several respects be claimed to be one of the closest things he has done for decades to opera in the traditional sense - a genre he has not otherwise cultivated since Siddharta (1980).

The composer himself writes of the work:

\\The cantata begins bright and ‘Danish', but develops militaristically in an orchestral prelude that I call 1864 Overture (‘An Exposé of Politics'), since the music describes the consequences of tunnel-vision nationalism in 1864: decline, chaos and confusion. The cantata ends with a eulogy of the fairytale - as the messenger that can knock on any of our doors and (despite its strange language and its often odd plot) can perhaps make us think in a slightly different way ...\\

Besides the orchestra and the two soloists mentioned, the Narrator and the Marsh Witch (mezzo-soprano), the ensemble for the work is a mixed choir (the Townspeople with a few solo representatives, the Woman and the Man, soprano and tenor respectively), and a children's choir, divided into human children and will-o'-the-wisps (male and female, for they come in both sexes, writes Andersen). The will-o'-the-wisp choir is joined by a percussion group of youths, which sometimes accompanies and beats the drums for the troll-like little people.

The fact that the work is integrated - that is, written for professionals and amateurs or semiprofessionals (music school or conservatory students as percussionists) - is intimately related to Andersen's tale. It just couldn't have been otherwise, thinks the composer.

The composition was commissioned by Edition Samfundet to mark the bicentenary of the birth of Hans Christian Andersen, and the work was composed with support from the Danish Arts Foundation.

The work was premiered on 2nd April 2005 in Birmingham by the Birmingham Symphony Orchestra with Rumon Gamba as conductor, Simon Callow as narrator and Helene Gjerris as soprano soloist.

It is almost exclusively as an instrumental composer that Bent Sørensen has made his name since the mid-eighties as one of the most listenable Danish composers of his generation, at the international as well as the national level; in the early years especially in a long succession of chamber music works, including the four string quartets that now feature centrally in the oeuvre, but in the course of the 1990s also with a growing number of works for large orchestra: the cantata The Echoing Garden (1990-92), his only symphony so far (1995-96), and the three solo concertos - the violin concerto Sterbende Gärten (1992-93, awarded the Music Prize of the Nordic Council), the trombone concerto Birds and Bells (1995) and the piano concerto La Notte (1996-98).

By contrast Bent Sørensen has written very few -vocal works - apart from The Echoing Garden in fact only the choral work In Paradisum (1994-95, 2002) and a number of smaller songs as well as his principal work to date, the opera Under the Sky, which was premiered at the Royal Danish Theatre in 2003. But that is not to say that his music is not dramatic and evocative.

On the contrary, it is very much so. That is, at once quiet and intensely present, half in shadow and full of purling motion like memories from a remote, ruined past that urges itself upon us here and now.

It is music that often seems to make memory itself its theme, to evoke memories or unconscious recollections - with all the shadow plays, displacements and obscurities of memory; music where the story is not only present as something outside us, something that can be observed or treated like an object, but is within ourselves, constantly lives with us and is also interpreted in terms of the present.

Bent Sørensen's vocal work written to mark the cele-brations of Hans Christian Andersen's bicentenary, like his opera Under the Sky, has a text by the dramatist Peter Asmussen. And like the opera, and in a broader sense like much of Sørensen's instrumental music, it is very much a work that opposes distance to closeness - as is so often the case too in Hans Christian Andersen's texts, in particular The Little Mermaid with the title figure's painfully hopeless wish to go ashore and win her prince.

There is no question of any direct retelling of Ander-sen's tale, although the chorus cites key points in the story. Asmussen's text and Sørensen's music are rather a meditation on the interplay between the story as such, the protagonist herself, and the author behind the story.

The work is in three movements: \\The Storm\\, \\The Silence\\ and \\The Feast\\, and along the way it also takes place in three simultaneous strata. The girls' choir tells the story in the third person, while the soprano soloist embodies the Little Mermaid as an independent subject, and the tenor soloist sings quotations where Andersen himself tells us about telling tales. Thus the work as a whole also becomes a meditation on the ‘fairytale' as literature: a story that is told, but such that a living being emerges from it, and with an author behind it who at the same time lives his own life.

In the concert hall too the distance can be experienced very concretely. Apart from the very intense introduction, this is extremely quiet music, even by Bent Sørensen's subdued standards. It seems to be situated as far from the listener as the mermaid is from the land; by virtue, too, of the fact that the actually rather small orchestra plays what is often very densely-written music, with a more than sixteen-part string texture in some places.

Distance is a theme too in Bent Sørensen's very specific and unorthodox requirements for the disposition of chorus and soloists. As in the large choral work In Paradisum, he works with spatial effects. In this case two of the three choirs into which the girls' choir is divided, each with its own solo clarinet, are placed one on each side of the audience. At the same time, the strings are located at the middle of the main stage, with the soprano soloist in front by the conductor, the tenor soloist farthest back with the woodwinds and the third girls' choir, while each of the two percussionists is positioned in a different corner, along with piano, harp and French horn on the one hand, and on the other the remainder of the brasses.

The work was given its first performance on 12th August 2005 in the Royal Albert Hall in London.