The composer Bent Sørensen (b. 1958) writes music that is at once quiet and insistent, half in shadow and full of purling motion, like memories from a faraway faded past. The three works with the piano in focus, released here for the first time on CD, have been recorded by the English pianist Rolf Hind in collaboration with his regular duo partner, the violinist David Alberman, and accompanied by the BBC Symphony Orchestra under the baton of Michael Schønwandt. 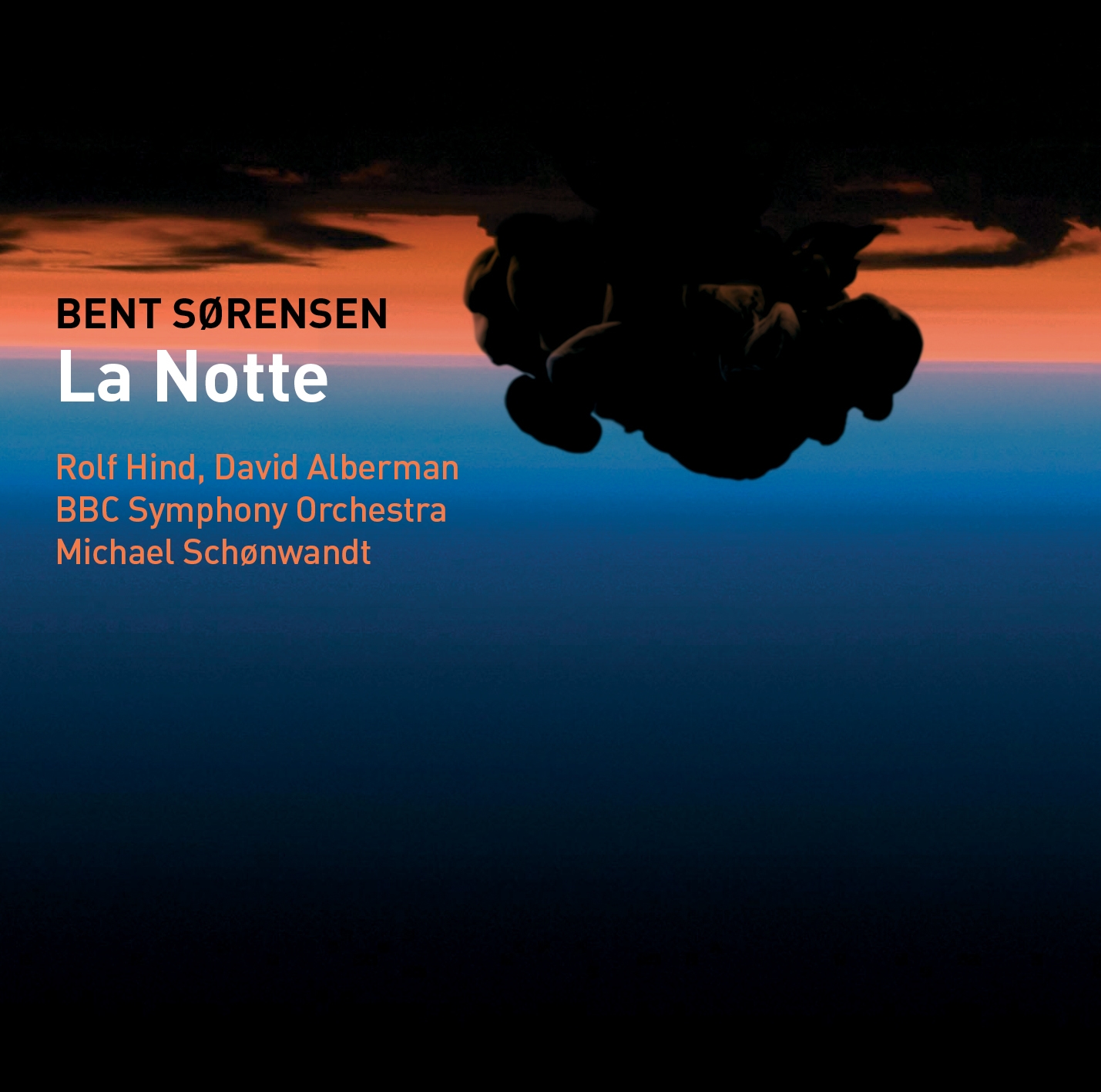 On the trail of Bent Sørensen by Jens Brincker

Like several other great Danish composers (for example Carl Nielsen) Bent Søren-sen comes from folk music. He began his academic musical training at the age of 25 in Copenhagen with Ib Nørholm as his teacher. The very next year he entered the ranks of the modern composers with the string quartet Alman (1983-84), which was quickly followed by two other quartets and attracted inter-national attention. Never-theless, Bent Sørensen did not yet feel that he was ‘fully trained' as a composer. He continued as an academy student in Copenhagen until 1987 and then in Aarhus with Per Nørgård as his teacher until 1990, when he was 32. Thus Bent Sørensen is not only an original talent, but also (and this time unlike Carl Nielsen) a technically virtu-osic composer who is able to express exactly what he feels in characteristic sounds.

1990 is also the year of the earliest work on this CD: the piano work The Masque of the Red Death (track 8). It immediately draws one's attention to another characteristic feature of Bent Sørensen's music: the titles! He names his works as parents name their children. This involves a hope that the work will both live its own life and have its own identity; but also an expectation that through the name the work will evoke associations with the past. Names are never new. In any naming there are also elements of a ‘-calling-after'.

The Masque of the Red Death is such a ‘called-after' work. It takes its title from a tale by the American horror writer Edgar Allan Poe, about the plague which, wearing a red mask, takes part in a masquerade. But one should not expect to find horrific effects in the music. Bent Sørensen reads Poe not as a thriller writer, but - like Baudelaire, who translated Poe into French - as a Symbolist. The entry of the plague into the masquerade is a symbol of the decline and decay that accompany life and end it. Or to put it in the terminology of our own time: the plague symbolizes the entropy that is the measure of the imbalance in any living system and in the universe itself. When the imbalance has been neutralized and the system is in com-plete balance, life is extinguished.

The music expresses this process, from the teeming life in the highest regis-ters of the piano to the serene calm of the last, low final chords. But this is no linear process. The decline is heralded by a low-sounding motif which, at first very faintly, later a powerful irruption, interrupts the swarm of notes in the descant. A minor third (sometimes combined with a second that recalls the Dies irae melody) rings out like a kind of funeral bell which in time impels the music towards quiet reflec-tion and weighs it down. The Masque of the Red Death is not programme music after Edgar Allan Poe, but a metaphor of the decay that is thematized in several of Bent Sørensen's works from the 1990s.

In terms of piano technique the main work on this CD - the piano concerto La Notte (1996-98, tracks 9 and 10) - may seem like a continuation of The Masque.... The same staccato attack that repeats notes and chords at a hectic tempo is characteristic of the first movement of the concerto in particular, as is the fond-ness for the high register and the very faintest dynamic nuances that leave a few powerful notes standing as striking irruptions into the process. The title too provides food for reflection. But this time one seeks in vain for a connection with predeces-sors such as a well known flute concerto by Vivaldi. The concerto is simply called La Notte (Night) just as its successor, Sørensen's second piano concerto, is called La Mattina (Morning); and just as Bent Sørensen has the common Danish name Bent with no connection with other composers with the same first name.

Nevertheless La Notte is crucially different from The Masque... In a way it is a more personal work, for here the individual in the shape of the piano soloist stands against the collectivity in the form of the symphony orchestra. In the first movement it is as if the diversity of sounds and motifs played by the collectivity spellbinds the individual and opens up a world of experiences. As if the myriad planets and nebu-lae of the night, near and far, suck the observer in and fill the mind. Only towards the end of the movement does it seem that the individual is sated with and can con-tain these experiences.

If the first movement is seen as the conscious experience of the night, the second movement becomes the dream, where the experience re-emerges - now in the individual's own unconscious interpretation. Here the many luminous impres-sions gather into melodic images that soloist and orchestra form jointly, until the end of the movement, where the soloist completely takes the lead in the long final cadenza. Viewed as a whole the two movements of the concerto can be experienced as the formation of a -personality; not in the symphonic tradition from Beethoven to Shostakovich through struggle to victory\, but in a present-day sense through a clarification or harmonization of the unconscious and the conscious. The individual recognizes himself in the confrontation with \\the Other\\.

This process can be laborious and burdensome, but it can also take a bright, joyous course when stars smile and beckon, and dreams are peaceful, colourful and fantastical. Such a revelation of beauty is Bent Sørensen's Concerto. From the first tentative sounds in the highest notes of the orchestra and the piano to the cool fading of the ending, the music fills the ears and mind with light and shade, with dancing, laughing and poetic figures, Harlequin and Columbine in the Italian night - la notte.

There are also lines going from The Masque of the Red Death to the introduc-tory work on the CD: Sieben Sehnsüchte (1999, tracks 1-7). Together the two works form one of Bent Sørensen's major works, the hour-long Seven Longings, which is a dramatic triangle of soprano, violin and piano. Without exaggeration one can grant Sieben Sehnsüchte the title role in Seven Longings. Here too we have a drama, in the composer's words \\a chamber opera\\ written in \\impatient anticipa-tion\\ of the libretto for his first opera Under the Sky.

Once more, Sieben Sehnsüchte has the personality as the main character, but this time the personality is in pursuit of its alter ego. As we know, it is not good for people to be alone, and the longing to be fused with an Other is the theme that per-me--ates Bent Sørensen's work. The individual and the Other are symbolized by the two instruments. Violin and piano almost tie themselves in knots in the attempts of each to reach its partner. The music is extremely virtuosic and involves sound-elements such as glissandi on the strings of the piano, whistling, song, complicated double-stopping, microtones and other treats.

The virtuosity is not an end in itself, but a means of characterizing the longing for perfection through a fusion with the Other; not only as a physical union but also as spiritual concord. Eros and Agape.

In the first two movements the violin takes the floor, while the piano listens - listens and calls out, first cautiously, later more insistently. In the third movement the roles are reversed. The piano takes the lead, the violin gradually follows. In the fourth and fifth movement the two instruments stand equal and together seek out new possibilities, new regions of sound. But then the piano gains the upper hand. In the sixth movement it predominates entirely, while the violin lies like a faint shadow, a faraway dream. The brief seventh movement is a retrospect, perhaps a memory of what was and is no more.

Sieben Sehnsüchte is seven aspects of longing. Longing for consummation, longing for renewal. The longing that is the driving force in Bent Sørensen's music.

Jens Brincker is a former Associate Professor of Musicology, University of Copenhagen.