The title of the well known 15th-century song L'Homme Armé means “The Armed Man”. On Dacapo's new CD release it also means that Morten Zeuthen is equipped with his faithful squire, the cello – and nothing else.

For Zeuthen, solo performance has been an important part of his whole career since his debut until today. The focus on Dacapo's new CD is Poul Ruders' virtuoso variation work L'Homme Armé, which was composed for Zeuthen's debut concert in 1976. The nine solo variations are based on the well known 15th-century song with the apt name, and among other things require the soloist to whistle and hum in the course of the performance.

The rest of Dacapo's CD is unified musically by the Siciliano rhythm, which Morten Zeuthen has used as a point of departure for a number of small commissioned works by the most prominent Danish composers of the day. We hear four living composers' versions of a modern solo Siciliano, rounded off by three solo sonatas by Hans Abrahamsen, Per Nørgård and finally Vagn Holmboe. 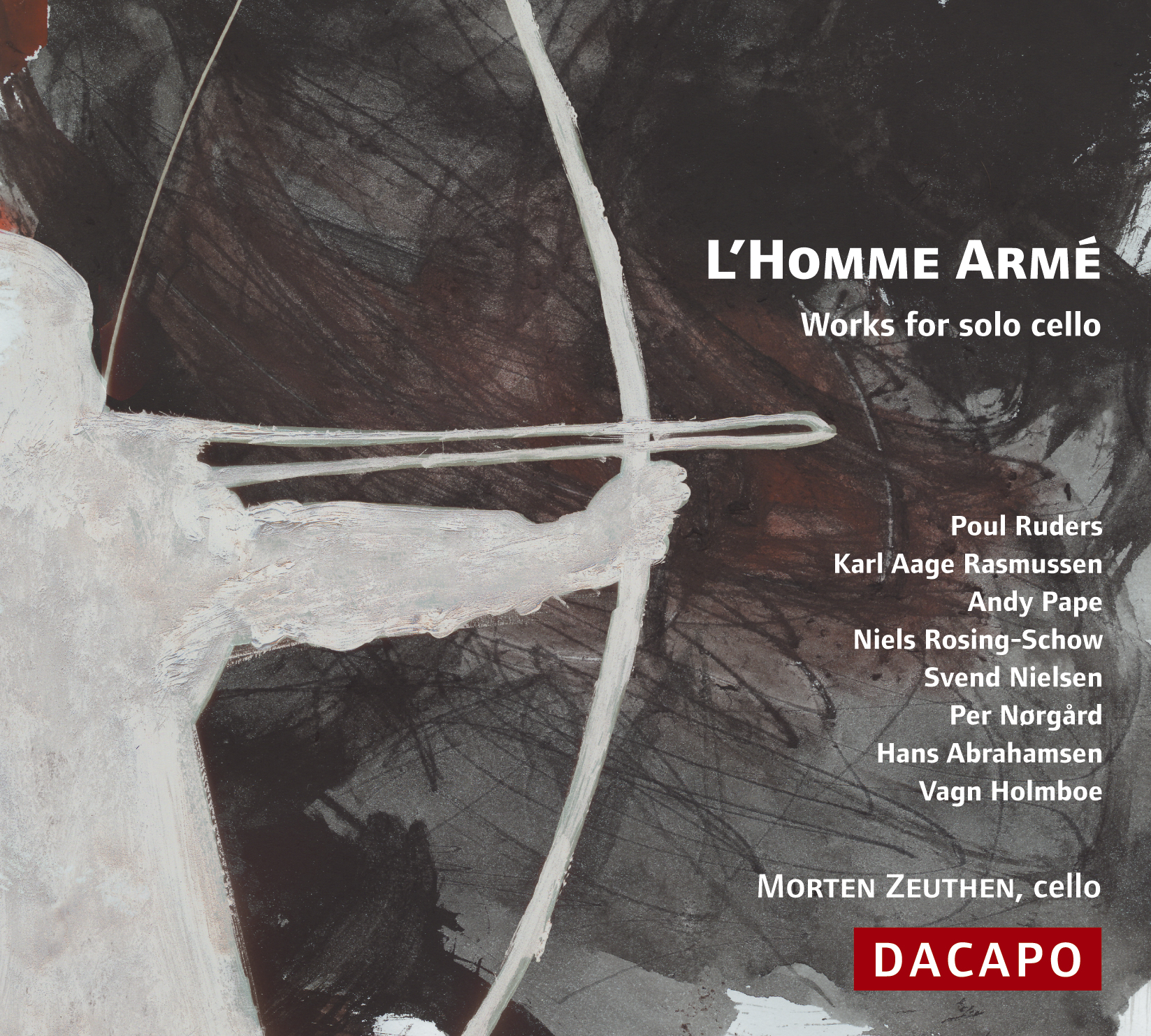 Because of its large melodic amplitude and its strength of expression the cello has, more than any other string instrument, turned out to be an excellent medium for pure solo music. However, it dit not reach its present possibilities until before as late as about 1800, at least as a virtuoso solo instrument in concerts with orchestra as well as a partner in chamber music on equal terms. Therefore, the six suites for solo cello by Johann Sebastian Bach, dating from about 1720, remained singular events for almost two centuries. Not until Zoltán Kodály's Sonata for solo cello from 1915 is its potential as a solo instrument truly (re)discovered.

On the other hand, especially during the second half of the 20th century, the medium of solo cello music has attracted a large number of composers. This is also very much the case in Denmark, where several generations of cello virtuosos have worked continuously and closely together with many of the leading Danish composers of our time. Both the older and the more recent works on this disc bear witness to this.

The little 14th century song L'homme armé (literally \\The armed man\\) is the first major example in European music of what in the jazz music of a later age was to become known as a standard. That is, a theme with musical possibilities that continuosly inspires many different composers and interpreters to create their own version of it - in this case, especially as the starting point for numerous renaissance settings of the Catholic mass.

Poul Ruders' series of virtuoso studies based on the theme was composed for Morten Zeuthen's debut concert from The Jutland Conservatory of Music. Even though the piece has never been recorded before, it remains one of the central works from Ruders' early period, in which he again and again occupied himself with interpreting early music, not least from the Renaissance and Baroque periods.

But Ruders' approach to music of past eras is neither a literal pastiche, nor a cool Stravinskyan underlining of the historical, intellectual and emotional gaps between then and now. Rather, as is also the case in Bravourstudien (Bravour studies), it is a question of finding ways in which the early music can be re-invented as contemporary and applicable even today.

At the same time, the very choice of the most well-known and \\recycled\\ theme of early music in itself becomes a kind of commentary upon the many different and often contradictory historical prisms, through which we view European musical tradition. In this case, they include a very old theme associated with bygone wars as well as - to those with their musical history present - bygone church music, a relatively modern instrument such as the cello, the romantic concept of a collection of virtuoso studies, and for each of the nine variations yet another historical approach: a dramatic overture in something resembling French Baroque style, an expressive recitative, a distant serenade played con sordino, a jangling potpourri, one study dedicated to purely showing off, a calm intermezzo (which includes the cellist whistling), a sweeping fantasy, yet another serenade, and finally a \\Variation classique\\ which in the end turns out to be as modern as anything.

Silhouette to a poem by Naja Marie Aidt

Siciliano, \\Once upon a time\\

The next group of works on this disc mirrors this question: what happens, and what does the combined picture look like, if one commissions a number of composers to create a personal contribution to a traditional genre? The present composers have all been asked by Morten Zeuthen to write a piece based on the quietly rocking rhythm in a 3- og 6-beat meter, which since at least the late 18th Century has been known as siciliano or sicilienne.

As is the case with other traditional movement titles in early classical music, this rhythm is named after a geographical region - similar to (mostly French) titles like the ecossaise from Scotland, the polonaise from Poland or the allemande from Germany. On a larger scale, the phenomenon can be found in Johann Sebastian Bachs English and French Suites for keyboard, as well as in his Italian Concerto.

However, contrary to other movement titles from the Baroque era, the sicilienne has never been a part of the conventional multi-movement suite structure. With its somewhat melancholy character and often quite long melodic lines, it does not so much evoke courtly dances in stately halls, as it does the lonely mediterranean fisherman losts in his own thoughts.

Due to its roots in popular song, the sicilienne has so to speak had a life of its own down through musical history, and rather than appearing as a stylized movement form in itself it usually turns up, anonymously but still clearly recognizable, inside larger forms. Apart from its frequent appearances in late Italian Baroque opera - and later in the groundbreaking works of Vincenzo Bellini from the early 19th century - it appears again and again in the many keyboard works of Domenico Scarlatti from the first half of the 18th century, and with its protean face of idyll as well as melancholy it makes a distinct case for itself in such diverse arias as Erbarme dich from Bach's St. Matthew Passion, He shall feed his flock from Handel's Messiah, and later still in the first movement of Mozart's piano sonata in A major (KV 331) and the penultimate part of Brahms' St. Anthony Variations.

Silhouetto by Karl Aage Rasmussen takes its cue from a poem by the Danish poet Naja Marie Aidt, in which a coquettish flower seller turns out to be much more desperate and rude than she appeared at first sight. The same happens to the siciliano rhythm here, as it begins gently and serenade-like, but gradually becomes more and more abrupt and intrusive.

Siciliano sconfortevole (\\depressed\\, \\shocked\\) by Andy Pape also turns the gently rocking basic rhythm inside out, although in a much different manner. Most of the time the cello remains in its lowest area, like a caveperson who only momentarily is able to get to see at least the shadow of the sun.

In Niels Rosing-Schow's Siliciana (in the plural), however, the rhythm itself remains far away most of the time. Or rather: it remains hidden deep inside the dense, fragile web of rhythms and chords, which is continuously weaved over and around it, filled with harmonic effects as well as ornamentation.

Svend Nielsen's Siciliano with the subtitle \\Once upon a time\\ also uses the siciliano more as a foundation than as a façade. The subtitle refers to P.E. Lange-Müller's romantic stage music for Holger Drachmann's play of the same name, especially the serenade movement. But first and foremost the music here is one long, evolving line of melody and colour, gradually turning into a small drama in itself, with the cellist singing and shouting as well as playing.

Per Nørgård's 1st sonata for solo cello is a very early, juvenile work, and his 2nd sonata is a combination of two movements which were composed separately with several decades in between. So actually, his 3rd sonata is his first coherent, recent work in this genre.

The fact that it is conceived as a unity is obvious from the fact that the two outer movements are closely related. The long, immediately recognizable melodic line which dominates the first movement appears in the third movement as well, first in an inverted version and then almost identical to its original appearance, only shorter.

In contrast, the middle movement is a fast one, constantly and intensely on the move, with many changes of pulse and meters, as well as large melodic leaps. And while the outer movements each are composed as a single melodic line, the middle movement makes extensive use of the cello as a polyphonic instrument, employing lots of chords, double stops and flageolet effects.

Furthermore, the first movement as well as the first half of the second movement (written for an exhibition by the Danish artist group \\Storm og stille\\) remains perhaps Abrahamsen's most violently expressive music ever, full of furious glissandos and rich ornamentation. On the contrary, the second half of the second movement as well as the entire third movement - which, with a duration of more than six minutes, stands out as a very long work by Abrahamsen's miniaturist standards - shows him in his most delicately poetic, complex and epic mood. The siciliano rhythm flows along as a distant undertow, which never the less runs through everything that happens.

Holmboe's starting point as a composer was late Nordic romanticism, especially the music of Jean Sibelius, but from the 1940's and onwards, his experiences with Eastern European music (art music as well as folk music) became just as influential. This includes his only work for solo cello, by far the oldest work on this disc, which has the Hungarian composer Zoltán Kodály's groundbreaking solo sonata as its obvious source of inspiration.

This is not only the case in terms of melody and harmonization. Its huge, and for the usually austere Holmboe quite atypical pathos also points far beyond the Danish borders and further south, as does its broad, epic scope.

The unconventionally slow, long movement which opens the sonata, sets the mood for the entire work. The title Prelude is very much an understatement of the weight and expressive force of the movement, as is Holmboe's labelling the just as weighty third movement simply an introduction to the final movement.

But the two fast movements are just as unconventional. Among other things, the second movement plays tricky games with the soundscape of a quick, Baroque fugue movement, without coming anywhere close to a simple pastiche. And while Holmboe in many other final movements settles for a folkloristic full-speed-ahead-approach, the present finale is a joculous tour-de-force of nuanced pulse, gliding to and fro between a number of different meters and subdivisions thereof.