The concept of musical meetings – in Italian “incontri” – is a common denominator in the three orchestral pieces by Pelle Gudmundsen-Holmgreen on this CD, recorded in the presence of the composer by the BBC Symphony Orchestra and conductor Thomas Dausgaard. The fantastic hallucinogenic landscape of the title work, presented here in a live recording from the BBC Proms 2012, meets the pulsating irony of the two modern classics Symphony, Antiphony and Mirror II – all three works reflecting the composer’s lifelong fascination with the absurd. 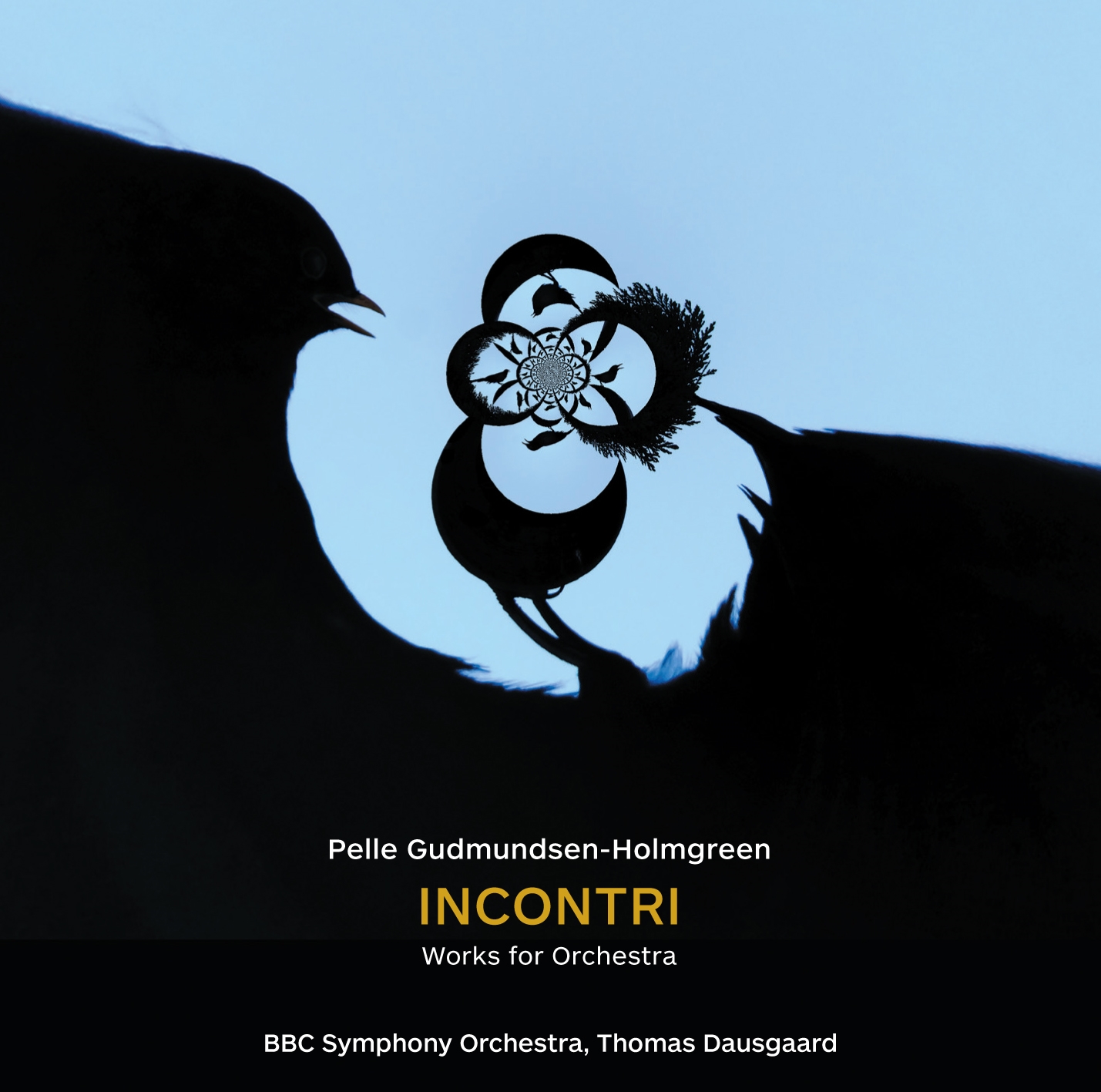 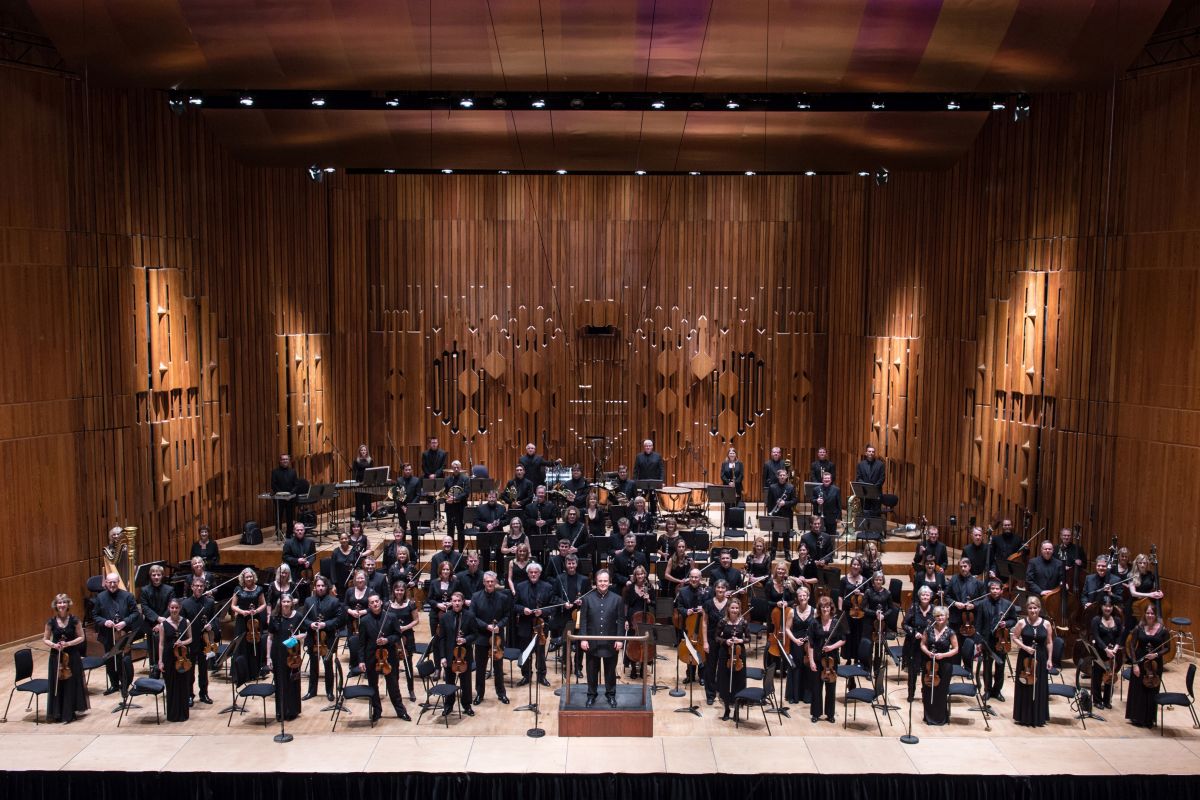 Think of the throbbing instrumental discourse that opens one of Johann Sebastian Bach’s Passions, or the gregarious gameplay that launches his first Brandenburg Concertos. Is there not something biological about the ensemble’s collective heartbeat, irrespective of the chosen tempo? For all its sophistication and spirituality, is there not a primordial quality to the music’s gait? Does it not live or die by some animalistic pulse?

So it seems with a great deal of music from Pelle Gudmundsen-Holmgreen’s pen. ‘I have created some of the ugliest works ever made in Denmark’ said the composer in 2006; ‘I have succeeded in making both professionals and laymen cringe’. Perhaps. But just as Bach was concerned only with the glory of God using what we might today consider limited means, PGH is unfettered by the theoretical politics of contemporary music’s endless allegiances and trends. He has purposefully devised his own systems of limited means, as the three works on this recording demonstrate with an imagination that is truly unlimited.

PGH’s tendency to self-restrict in search of greater focus was most famously heard in Tricolore IV (1969). The piece is built on three tonal chords, one on strings, one on brass, one on woodwinds. People derive pleasure from hearing things in the simplest possible manner, PGH explained in connection with the piece. But the work’s first audience in Basel booed him off the stage. That seemed to stimulate the composer even more.

Around that time, PGH’s own take on ‘new simplicity’ took root. As Tricolore IV demonstrates, it’s a simplicity that stands slightly apart from the 20th century’s collective lurch towards cleanliness and restraint. PGH’s revolution is perhaps better aligned to Cage’s than Stravinsky’s: a return to ‘sound’ which ignores many of the trappings we have come to associate with ‘music’ – one that underscores the living beauty in raucous animal noises and naïve doodling; one that ­affectionately mocks any notion of compositional tradition. Beyond his penchant for characteristic, fidgety rhythms and chords built on perfect fifths (often with added sixths), not many quantifiable, isolated signposts exist to tell you you’re listening to a piece by PGH. Instead, other things tell you: the music’s natural, genre-less impulse; its freedom from arguments surrounding tonality; its absurdist tendencies; and the gait of the notes themselves – their living, biological pulse.

Mirror II began life as a piece for violin and electronics and was ‘converted’ by PGH into an orchestral work in 1973. If the works on this disc represent a journey to complete chromatic freedom, Mirror II is the most incarcerated. It only allows itself use of notes from two symmetrical outward sequences emerging from a central axis (the D above middle C), 21 pitches in all. The tone grid itself describes a journey from chromaticism to the diatonic, pentatonic and the triad. Melodic material can effectively only arise from the middle of the spectrum where there are variably spaced notes. The further away from the central D axis we get, the more free-floating the notes become, ‘like signals’ in the composer’s words. In the Prelude of Mirror II the full 21 tone options are spelt out, as if emerging from a fog.

Use of a delimited space built on a selection of available notes like this is a common tool in PGH’s works, one way he choreographs his delicate dance with tonality, pushing conventional harmonic tools out onto a tightrope. But in both the mirrored layout of the tone grid and the way those tones are used reflectively, the music fulfills the promise of its title. Each of the ensuing movements injects this seemingly narrow expressive frame with its own voice. The mirror games continue, clearly audible, as are snippets of Sibelius (Third Symphony) and Stravinsky (The Rite of Spring). Both quotes use adjacent notes – in the DNA of Nordic melody, granted, but also handy for those chromatic sequences early on in the tone grid.

PGH dissected and analysed Mirror II’s processes in a 1974 article in which he playfully labeled ‘for those who get more out of the music when they can see that everything is in order.’ Those processes are indeed fascinating, not least the composer’s use of the Fibonacci Sequence to re-create the calm complexity of Florentine palace facades in orchestral form. But in truth Mirror II needs no user manual or handbook. The tone grid’s limited space is naturally habituating, generous and cleansing – beautiful even in its provocative ugliness. Underneath it, that rhythmic heartbeat locks you in.

In 1977, PGH returned to the tone grid he had established for Mirror II. He extended each of the contrary-motion sequences by 8 pitches (16 in all, making a total of 38) for a new orchestral diptych, Symphony, Antiphony. Again, the aim was to habituate the material through its limited footprint even as it is mercilessly bent, abused and distorted. As in the Prelude to Mirror II, in Symphony – all two and a half minutes of it – the pitch space is defined via a clear and simple unfurling, like a flower blossoming hesitantly. But that tonal expansion is matched by a creeping exploration of orchestral colour, too: from vibraphone, marimba and piano to woodwinds, strings and eventually brass.

In the willful structural imbalance between the work’s two ‘parts’ – and in the composer’s grinningly obtuse remark that it’s just fine to perform them separately – is reflected the piece’s dalliance with the absurd. After the doodling violin solo that opens Antiphony’s first movement all manner of expression breaks loose, all of it based on the thematic and tonal borders set out in Symphony. Sometimes the music plays ball, respectful of the material and polite with it; at others it erupts in blazing anarchy. Ursula Andkjær Olsen suggests the music harbours ‘an irony that is ceaselessly on the move, an instability of meaning, both a yes and a no.’ The musicologist Daniel Grimley has subsequently linked that to PGH’s interest in Samuel Beckett and the music’s relentless deconstructive intent, its reflection of Beckett’s use of language ‘reduced to a series of speech acts’.

So, the three-note doodling that opens Antiphony, itself derived from the opening bars of Symphony, leads a merry dance into the concord and chaos of PGH’s enchanting thematic bricolage. Jungle sounds, city noises and reflective counterpoint are all embroiled in a playground scrap, but the heartbeat of that violin doodle remains. In the second movement, violins and ­violas pluck out PGH’s trademark piled-up-fifths chord in an affront to the honking horns; we hear the first suggestion of the piano’s Stravinskian ragtime that will emerge properly in the following movement, taunted by a 3-note horn theme, before it eventually splinters and disintegrates in the work’s final pages.

We might think much of the material here is being destroyed almost as soon as it’s been established. But the composer himself refers to the process as ‘mixed material purified by musical ritual.’ As we proceed, the trumpet’s adoption of the doodling theme and the three-note horn taunt coalesce, with bongos and a conga, towards hammering semiquavers on strings and winds under soaring horn calls at the piece’s apex. Is the pulse founded on those elements? It exists within them, but beyond them too, of course – just as it does in the respiratory rise and fall of the work’s pages.

With Incontri, written for and premiered by the Danish National Symphony Orchestra and Thomas Dausgaard in 2010 and revised the following year, pitch restrictions are lifted and the recording in hand branches into unconfined chromatic space for the first time. But other restrictions are in place. The first is rhythmic. Everything in this orchestral Prelude is pinned to a rhythmic ‘ground’ founded on two patterns that form a polyrhythm. Knowingly or not – stealthily or obviously – the patterns endear themselves as the piece creeps through its own fantastical, hallucinogenic landscape.

But there are timbral restrictions in counterbalance. ‘In a forest’, writes PGH in the preface to the score, ‘different kinds of birds continue their territorial song without yielding or altering their signals.’ Thus in Incontri, each instrumental group – strings, winds, percussion – maintains its own character; never does that character yield to another during an encounter, and never is material shared between groups.

PGH coined the term ‘jungle baroque’ with reference to his own Concerto Grosso (1990), and Incontri operates on some of the same principles. In his preface PGH elusively links the ‘wild and savage sounds’ of both pieces. But like its predecessor, Incontri explores ideas of orchestral colour through Baroque rebuttal, affront and contrast rather than the suave theatre of conspiracies that might make a modern Concerto for Orchestra. Echoing the tinkling continuo of Handel or Corelli’s concerti grossi, the rhythmic ground keeps the piece in a groove, however much the downward-dragging timpani or breezeblock wind sirens try to disrupt it. In the composer’s words: ‘a pulse can die … but you can also find ways of making it more alive.’

Andrew Mellor is a journalist and critic with a particular interest in the culture and music of ­Denmark and the Nordic countries.