This album presents the world premiere recording of a unique new set of pieces by Danish composer Pelle Gudmundsen-Holmgreen, written and dedicated to his GRAMMY®-winning playmates in the Kronos Quartet and Theatre of Voices with conductor Paul Hillier. Using a text from Henry VIII’s Songbook and taking musical inspiration from the old ‘ground’ technique and from a certain famous Baroque canon, Green Ground offers a kaleidoscopic trip through the enchanting world of PGH, offering independent layers of playful sounds for strings and voices and then merging them together to the accompaniment of wooden percussion instruments. 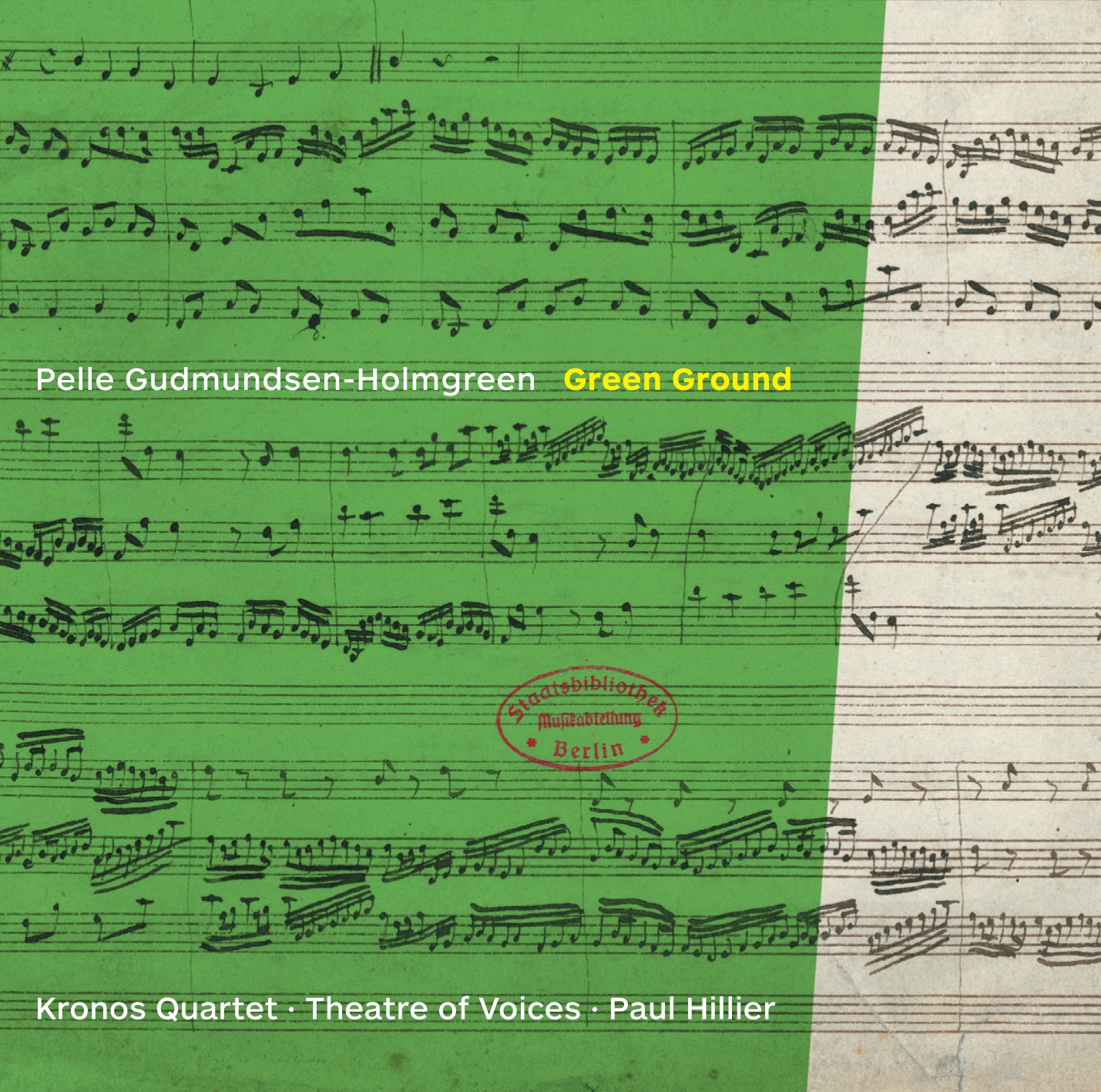 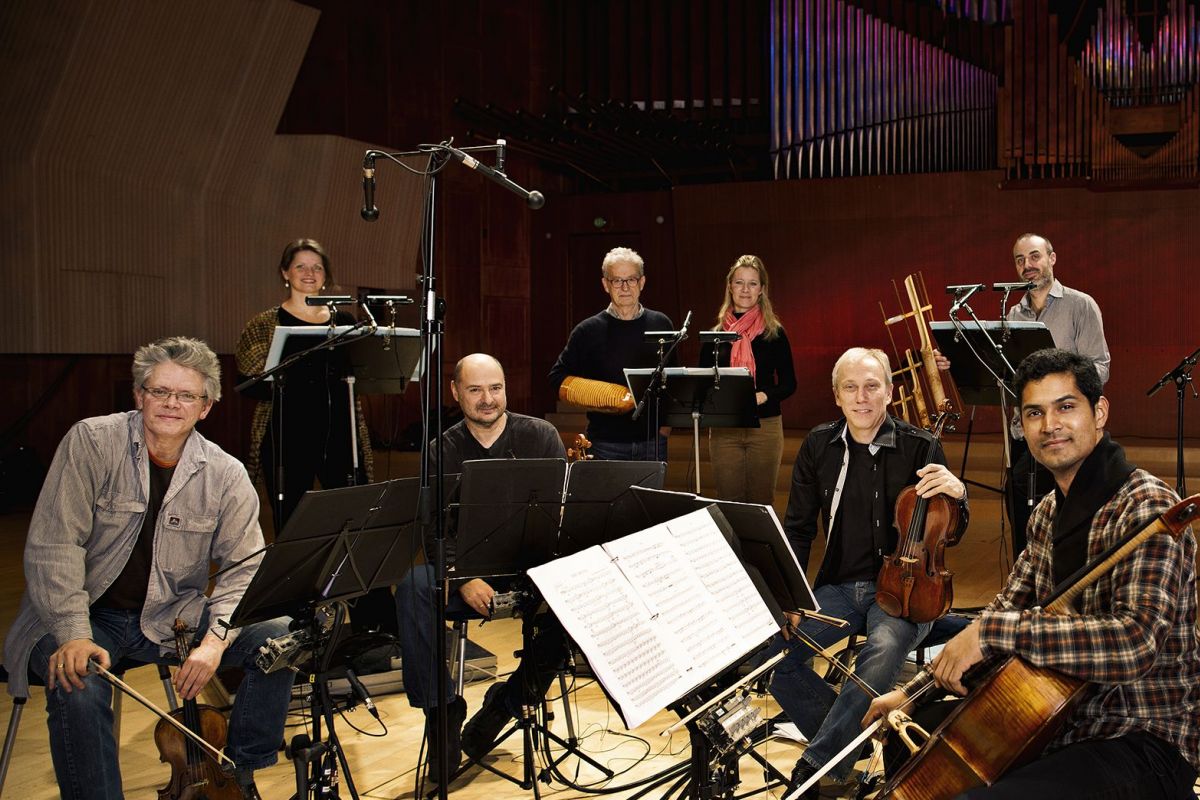 Members of the Kronos Quartet and the Theatre of Voices tell about their dedicated passion for Pelle Gudmundsen-Holmgreen's music.

A Muttering In The Mud

‘I am told that my music sounds strange, to which I reply, doesn’t nature sound strange?’ Since the late 1960s, Pelle Gudmundsen-Holmgreen’s hunt for musical realism has led him back, time and again, to nature in all its wonderment and banality – to waves and tides, to mudflats and reed-beds, to bird-houses and forest floors. A natural impulse is found in almost all his works, whether they call for human voices inflected with avian song or for a string quartet itching and scratching at itself like a shuffling, furry quadruped.

From the late 1960s the world started to get a taste of PGH’s particular take on Danish ‘new simplicity’, one that combined charming naivety with grounded wisdom concerning the most obvious of our planet’s truths. That was there in the music’s impoliteness, its misbehaviour, its fallibility and its earthy grind. Then as now, PGH liked to get straight to the heart of the matter in his works. Our own species and more are reflected in their animalistic gait, their living pulse, their repetitions and obsessions, their numerous displacements and distractions and even their occasional embarrassment at themselves.

In stripping his music of affect and affectation, PGH tells of a world that is sometimes ugly and sometimes meaningless. But those creative bogeymen are fierce stimulants for the composer, too. ‘The catastrophe of meaninglessness has something deeply liberating about it,’ said PGH in 1992, reflecting on the creative awakening he experienced on delving into the work of Samuel Beckett some forty years earlier. The joy of it, surely, is that meaninglessness invites scrutiny: we are more likely to flip something meaningless over, dissect it or shake it rigorously, just to be sure nothing we’ve missed falls out.

Thus, like Beckett, PGH has played with his own creations in clear and revealing ways – much like a child might play with toy building blocks. The composer first superimposed one piece on top of another in his percussion concerto Triptykon (1985). The process was developed in Song, Play, Company (2010-12) in which Company consists simply of Song and Play performed at the same time. In the present CD, the technique is extended: two of PGH’s most recent string quartets are heard alone and then with the vocal score Green sung on top of each – ‘a perfect Pelle Lego set,’ in the words of Theatre of Voices’s Else Torp.

PGH’s first score for the Kronos Quartet was Parted in 1984. Two years after that, he wrote a piece for the ensemble simply titled Ground, which refracted the common baroque practice of looping a consistent bass line (or ‘ground’) by using rows of harmonic sequences in symmetrical upward and downward movements. Two decades later the composer wrote what would be his ninth (and he believed final) quartet work, Last Ground, again for the Kronos Quartet and again operating on a repeating ‘ground’, this time a sequence of chords.

But despite PGH’s labeling Last Ground ‘a farewell to the string quartet and more than that,’ it wasn’t to be. A tenth quartet New Ground was followed by an eleventh, No Ground, conceived as a counterbalance to its predecessor. No Ground is based on material from Parted and purposefully offsets New Ground’s tonal harmonic footing with atonality. It goes further than that, too, calling for the pitch-less, scrunching sounds that come from moving a highly-pressured bow too slowly on the string to induce the natural resonance (one of PGH’s sonic hallmarks).

No Ground isn’t just missing a ground; it suggests a general lack of ‘common ground’ between its wildly differing voices and ideas – some crawling on their bellies in the mud, others swooping gracefully in the sky, plenty doing all manner of other things in between. In another PGH score, those elements might have found a way of getting along. Not here. After trying everything, including the frantic embrace that hurtles through the second half of the third movement before screeching into buffers like a runaway train, the component parts agree to part.

‘I am very fond of elaborated constructivism in medieval and early renaissance music and I felt that the two quartets [No Ground and New Ground] needed to be connected and combined – placed under the same hat.’ So reasoned PGH when he started work on the vocal/percussion score Green, written for vocal quartet Theatre of Voices. The piece quotes but also deconstructs traditional verse set by the early Renaissance English composer William Cornysh – words lined with tragedy, where ‘the greenwood’ suggests the gallows:

You and I Amyas

Amyas you and I

To the greenwood we must go, alas –

You and I, my life, and Amyas.

Initially we hear the woody percussion instruments (crotale, guiro, claves, anklung) that the four members of Theatre of Voices are instructed to play underlining single consonants or vowels snatched from the text and growled-out gruffly or offered up unassumingly. Soon those fragments coalesce into the word ‘Green’ and thereafter a bluesy madrigal in which the verse takes shape using material originally conceived for the strings of New Ground. Eventually the text is heard complete, the voices now alone, moving slowly but with PGH’s distinctive shuffle. The singing is pure in tone and the simple little song uses open or triadic intervals with an air of naivety, frequently resting on a fixed note from the bass; perhaps, in this, is a hint of the traditional Mongolian singing the composer so admires.

As you might expect, when Green is performed on top of No Ground in No Ground Green both works appear changed. The surprise, perhaps, is that these two pieces – one blunt, the other elegiac, both troubled in their own ways – seem to raise a gentle smile when joined -together.

New Ground, ‘an outgoing, light quartet’, is based on a famous old ground: that used by Johann Pachelbel in his well-known Canon (used ‘just not to disappoint anyone,’ according to PGH). Pachelbel’s ground isn’t spelt-out verbatim; PGH gives it an extra bar and a little chromatic detour on its way home. Apart from that, the technique is every bit baroque: above the consistently looping ground, the discourse becomes ever more complicated and outlandish, and, in this case, fractious, flailing, scared and animalistic.

When the five-bar ground flattens out, shedding its chromatic edge and becoming an unassuming cello pizzicato, we hear the material that would become the basis of Green in the upper strings. Next – after the sound of open-string pitches (another PGH hallmark) – the ground falters before grinding to a halt altogether. When it starts up again, emphatically and almost -immediately, we hear a premonition of that hurtling passage in No Ground but here empowered by its baroque structural glue, munching on even more of Pachelbel’s original material.

In New Ground Green the effect of the combination is different again, the two scores super-charging one another in a way that No Ground and Green shied away from. We begin as if in the midst of one of PGH’s capering ‘jungle baroque’ textures, but a sense of apotheosis soon drags the music towards something coalescent or even rhapsodic. It’s the bluesy C naturals of the greenwood madrigal that bring the whole back down to where it belongs; eventually the instruments drop away almost entirely, and the voices are left with their lonely little madrigal. Now, almost certainly, we have the farewell that Last Ground never was.

Andrew Mellor is a journalist and critic with a particular interest in the culture and music of -Denmark and the Nordic countries.