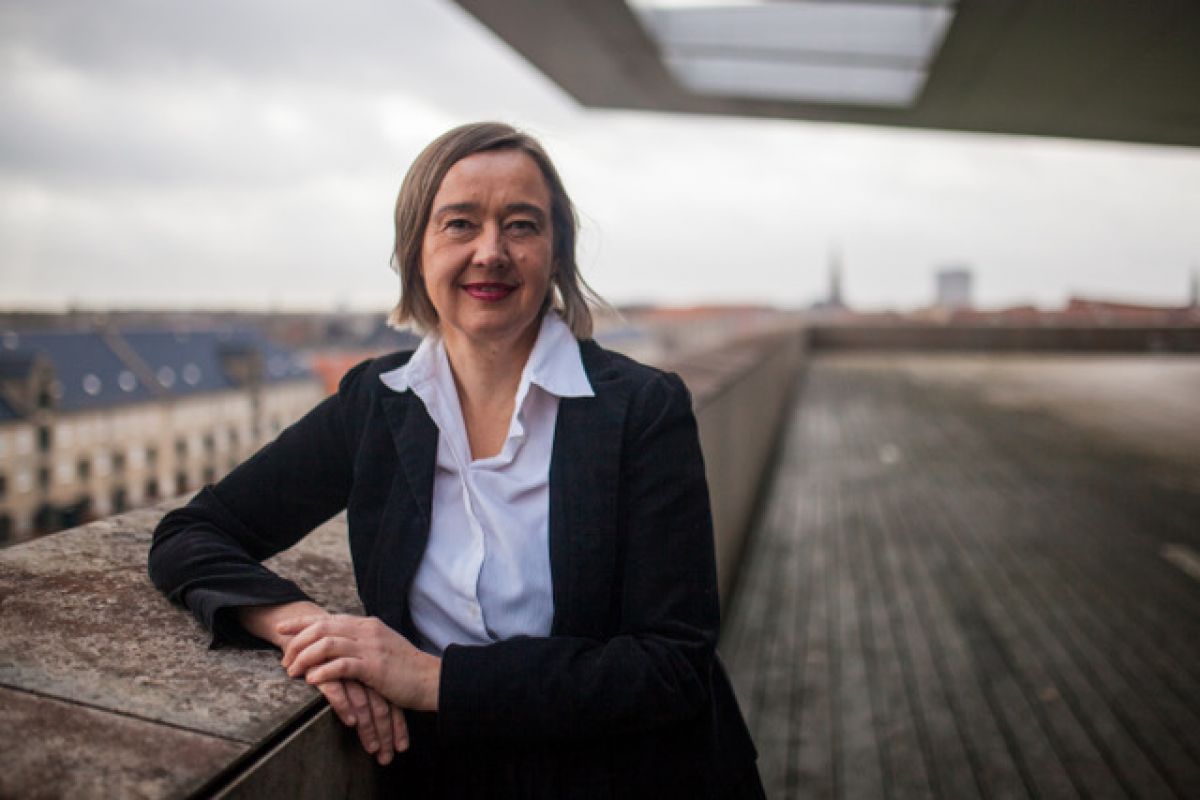 Eva Noer Kondrup and the seagulls

"Music is like language. Expressions like musical idiom, musical accent are not metaphors. But music is not language. Its language-like character is at once of central and peripheral importance. Anyone who perceives music as a language is on the wrong track." (Theodor W. Adorno)

If there is anything that is typical of Eva Noer Kondrup, it is her stubbornness. In the past when, as her teacher in composition, I thought I had convinced her of something, I could be sure a surprise was waiting the next time we met. What seemed so straightforward and plausible in the course of the conversation had now taken on a quite different character, for when Eva Noer Kondrup reflects over the influences she exposes herself to, the result is always a very personal approach, something distinctive. Out in her island fastness of Hirseholmene, the seagulls they fly high...but what she has in her eye is a splinter of Hans Christian Andersen's magician's mirror, and thank goodness for that. Her composing style ranges from a ringing simplicity, a deliberate "emptied-ness" (for example in 3 Studies for Piano) not unlike Eric Satie's Musique de meublement (with early Cage in the closet), yet without being that, to something that emerges, just when you thought you were sure of it, as decidedly old European virtuosity and Slav passion. From apparently naively simple, clear-cut note constellations, sudden icons, sounds of a beloved past, spring up; just when time seems fast asleep, Eva plays an unexpected "Heaven can wait" trump card: Paganini with four notes and digital echo! If you try to challenge her about where all these contradictions could come from, her answer is sphinx-like and evasive. More power to her: no composer wants to be compared to another. But as a rule, some model is gnawing away at one's consciousness and can be coaxed out - but not so easily. Eva demands not only her right to be herself but the right, when she feels like it, of the whole western European tradition to stick its nose in like a dear old acquaintance! So she looks far back in the past in her observation of Klara's Pearl: a troupe of medieval jongleurs (time sleeps!) occupies the modern landscape.

"Postmodern", some people might claim, but no, not that either. Unlike the Russian composers who made their impact in the west after the Wall fell, and with whose music Eva Noer Kondrup is not unfamiliar, stylistic pluralism and quotation technique are not the right terms, for she doesn't quote, she seeks complete integration. The bells of the Copenhagen City Hall are present in While Time Sleeps... without us having to hear them. One could also accuse her of naïveté, but that won't wash, for she explicitly acknowledges naïveté as a right not to fall into the trap of intellectualism. Eva wants the masks to fall. And if they won't fall of their own accord, she'll unmask them, without clearly showing who the mask is being torn from. She strokes the fur - against the hair!

"No one bathes in the same river twice ..." (Heraclitus)

Despite this stubbornness, which could easily be interpreted as antipathy towards the academic, intellectual anti-naïveté that thrives at an educational institution like an academy of music, she doesn't have much track with Iannis Xenakis' rebellious urging of the students to forget their teachers and become themselves: that's too easy for him to say, she argues in the journal Dansk Musiktidsskrift. That sort of sixties trip belongs to the distant past. Otherwise, she is amicable enough, with a becoming firmness behind which no one penetrates, but which still has its seductive side; as in the work PARA - a hard case! - an insistent exploration of a rigorously reduced note and interval space, modernist in its structure. Rarely has the octave interval been so consistently emancipated from its neutrality and innocence. On the surface, the second movement, in particular, can be heard as an extension of Cage's string quartet of 1950 - viewed through a later Pelle Gudmundsen-Holmgreen -like "banality" in self-reflecting structures. PARA is not about expression but about meaning: whether you can get through to it is a matter of whether you experience Paradise or paranoia (as Eva Noer Kondrup herself puts it).

"...what is music? Music is language. A person wants to express ideas in that language, but not ideas that can become translated concepts - musical ideas... In fact mankind only exists because he expresses himself. Music does it with musical ideas. When I want to say something I do it, of course, in a way that others understand." (Anton Webern).

Eva Noer Kondrup's contradictions can also be felt in the confrontation between chamber music and her preoccupation with dramatic form, as in opera: here the strength of the music lies in the ability to formulate statements. Eva Noer Kondrup wants to say something, but not with egocentric lyricism: her music (including the chamber music) may be bound by melos, but expression and interpretation are not straightforward. Rather, her melody is as cruel as a nursery rhyme: the surface is genuinely innocent, but the legs are torn off the fly one by one in analytical absorption. Is she a doomy composer? No, far from it; in fact, humor is an essential element in the depth of her opera Neja. Indeed the libretto is grotesquely hedonistic, and the music makes no bones about being the same, but the main character is left standing alone with slit wrists amidst all this superficial hullabaloo. Vulnerability versus superficiality. I dream of peace, of freedom, of the abode of the blessed. Naïveté versus reality. We know a lot but understand little. Eva Noer Kondrup breaks free from the prisons of the isms. We don't have to be frightened, scandalized, or seek rejection in other ways, for example in some elegantly formulated intellectual puritanism, for it is enough that we - as listeners - simply are. At one and the same time the representatives of vulnerability and cruelty? Night and morning.