Works for cello and piano

Works for cello and piano

When the composer Herman D. Koppel (1908-98) began writing his cello works in the 1950s a brand new Danish cello repertoire was born. Koppel’s cello works are modern classics of Nordic music, full of power and beauty. For this CD release the cellist Morten Zeuthen has also asked Koppel's grandchild, the jazz musician Benjamin Koppel, to write a new cello work. The result is an exploratory, demanding solo piece quite in the spirit of Herman D. Koppel. 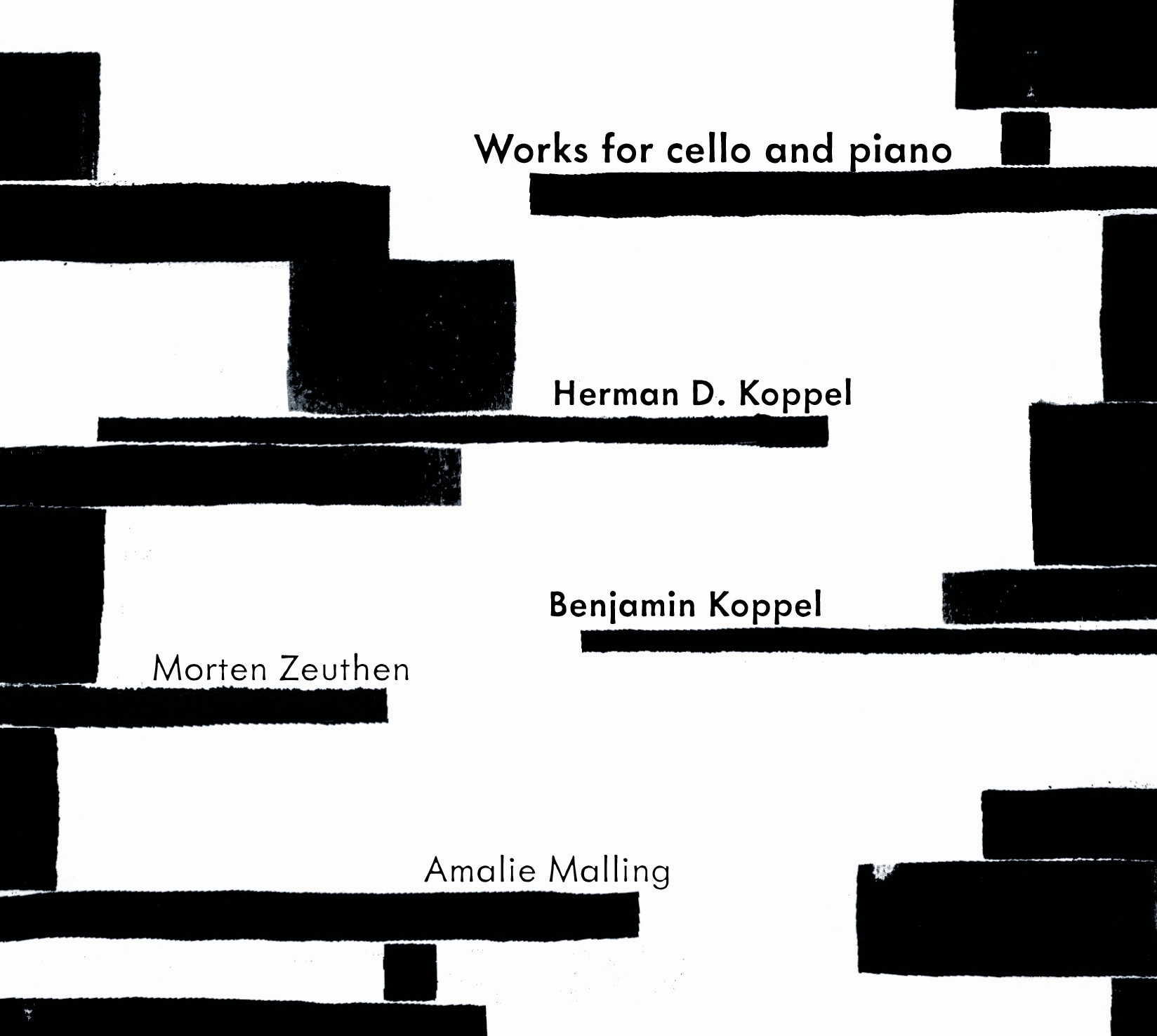 Herman D. Koppel and the Cello by Morten Zeuthen

Herman D. Koppel was probably the first leading Danish composer to take a serious interest in the cello as a solo instrument. Until about 1950 things looked rather bad for the cello: none of Denmark's best known composers appears to have had enough confidence in the qualities of the cello - or perhaps in the abilities of the cellists. At any rate neither Carl Nielsen, Rued Langgaard, Niels W. Gade, J.P.E. Hartmann nor Friedrich Kuhlau wrote as much a small romance for the instrument.

But since 1950 the cello has gradually been given a more prominent role in Danish music, and today it would be conspicuous if a leading composer did not attempt a solo cello part, provided acoustic instruments are at all involved in the composer's music.

Perhaps the Danish breakthrough of the cello was Koppel's outstanding Concerto for Cello and Orchestra, op. 56, and the two works for cello and piano on the present CD. This breakthrough was to a great extent due to Koppel's collaboration with the pre-eminent cellist Erling Bløndal Bengtsson (born in 1932), a collaboration that was closest in the 1950s. Koppel appeared as a pianist on the 18-year-old Bløndal's first gramophone record, recorded at the pre-mises of the rowing club ‘Kvik' at Svanemøllen in Copenhagen. In 1953 Bløndal became Koppel's colleague at the Royal Danish Academy of Music in Copenhagen, and he was also a good friend of the family. In particular, the cello concerto from 1952 has celebrated triumphs and has been performed just as often as Koppel's signature Third Piano Concerto, op. 45.

The year before the cello concerto Koppel wrote Ternio, op. 53, which has also become one of his best known works, and not only because its exists both in a version for violin and one for cello: Ternio, with its concise form, is a classic sonata, three movements typified by hurtling, sparkling energy. The word ‘ternio' is late Latin and means three of a kind, ‘a three' and so on.

The first movement begins in unison between the piano and pizzicato in the cello, a distinctive effect that strikes up the lively coolness that permeates the work. That Koppel was one of the outstanding pianists of his time shines through the style; it is in the crossfield between the instrumentalist's professional inspiration on the one hand and the composer's constructive intelligence and musical emotion on the other that most great music is created, and Koppel is one of the few performer-composers we have had in the field of classical music in Denmark. This can be heard clearly in the excellent piano parts in the two works on this CD, but in fact also in the way Koppel writes for cello, with a decided sensitivity to the instrument's special potential for sonority and expression, but with insight and respect for the technical con-di-tions in which the cello functions. The first version of Ternio was for violin and piano, but Koppel has stated in his marvellous memoirs Fra et Hjem med Klaver: "...it turned out that it [Ternio] was far better suited to the sound of the cello."

Sonata for Cello and Piano op. 62

The Cello Sonata from 1956 has the quality, format and style to achieve a position as one of the very best Danish sonatas for cello and piano. As pointed out above, our best known com-posers have no works to compete with it, and among the few other significant Danish works in the genre we see only the sonatas of Peter Heise (1867), Poul Rovsing Olsen (1956) and perhaps Louis Glass (1888/1914). Koppel's sonata was composed prior to his second trip to the Soviet Union, a tour where he and Erling Bløndal Bengtsson, in a series of concerts over three weeks, performed the Cello Concerto and the Third Piano Concerto, as well as Grieg's Piano Concerto and Dvor?ák's Cello Concerto, as well as the Cello Sonata op. 63 at all the chamber concerts. At that time it was highly problematical to take Soviet currency out of the country, so the homes of the musicians were furnished with among other things furs and a prestigious leather suitcase which Koppel's son Anders used on his travels until 2008. A few days before the tour of the Soviet Union the Cello Sonata was premiered in Copenhagen. The newspaper Ekstra Bladet wrote in its review: "So finely wrought and beautifully performed, this new sonata of Koppel's was a source of real joy." And the newspaper Information wrote: "One could hardly wish for a better representation of Danish musical culture."

The Cello Sonata too follows the traditional sonata form, and it should be noted that the slow middle movements in both Ternio and the Cello Sonata are passacaglias, gravely and calmly progressing over a predetermined bass line, a form which expresses warmth and seri-ous-ness, but which shuns the beauty-seeking or even the sweetness that bear up other slow movements in the repertoire for cello and piano. In the first movement of the Cello Sonata the second subject captures a wonderful, almost Nielsenesquely delicate nature lyricism, while the last movement with its burlesque humour hits off the Falstaffian aspect of the cello.

Introduction, Theme with Variations and Epilogue

Both works for cello and piano and the Cello Concerto thus come from the first part of the 1950s. Not until 1971 did Koppel write again for solo cello, this time without the piano, in two closely related works: Suite for Cello Solo, op. 86, which can be found in a recording by Erling Bløndal Bengtsson, and then the concluding work on this CD: Introduction, Theme with Varia-tions and Epilogue, op. 85. Not only is the actual title of the work a little knotty; the musical idiom too is less accommodating than in the two works with piano. Koppel's stylistic develop-ment of Nielsen's, Stravinsky's and Bartók's universes fades a little into the background as a result of Koppel's urge towards renewal and development. Without necessarily becoming an avant-gardist or dogmatic serialist, Koppel now works with a kind of free serial composition tech-nique: the theme is not varied in the traditional way. The rhythmic pattern, the octave position or the form of the row does not determine the variations, only the tone row itself is crucial.

Koppel's interest in the twelve-tone technique incidentally resulted in a remarkable con-cert event when, as a retired piano professor at the age of 71, he studied and performed all of Schoenberg's works for solo piano in concerts at the Concert Hall in Aarhus and at the Royal Danish Academy of Music in Copenhagen

Late in life, Koppel opened up to both Schoenberg and new acquaintances, but through-out his life he was curious about genres outside his own musical starting-point. This emerged from among other things his interest in rock and jazz. All his four children were given the finest musical upbringing within the classical tradition and each became a leader in his or her own field: his daughter Lone as a dramatic soprano, Terese as a pianist, while the two sons Thomas and Anders, after a long classical training, later went their own way with the formation of the rock band Savage Rose, and Koppel followed their careers with fondness and curiosity. Later the next generation has also developed into brilliant leading Danish musicians.

For any parent and for any teacher, Herman D. Koppel's example must be deeply fasci-na-ting: how is it possible to be such a striking, influential role model as a father/grandfather, and still cut so much slack? How can one pass on so many of one's own values and personal discipline and still succeed in encouraging individual freedom and creativity?

However, it is a fact that both talent and dynamism are to be found in full bloom - even unto the third generation of the family: in 2008, when Herman D. Koppel would have turned 100, a legendary concert was held at the Royal Library in Copenhagen featuring works by Koppel, films and interviews and a ‘mighty medley' section where his music was reinterpreted and re-arranged for classical instruments, jazz musicians, a klezmer ensemble and much more.

The initiator and conductor of this event was his grandson, the saxophonist Benjamin Koppel, who along with his father the composer Anders Koppel rearranged Herman's works and shed brand new light on his music.

Against the background of the centenary celebration it seemed natural to ask the jazz musi-cian Benjamin Koppel whether he would contribute to this CD with a new composition for cello. The task set was not exactly easy: Benjamin's new piece was to take its point of departure in Herman's solo work on this CD, Introduction, Theme with Variations and Epilogue. And the theme of that work is not one of the most accessible or singable.

Benjamin Koppel's cello piece came to be called Professor Herman's Cellistic Imagina-rium. It is a vital, originally conceived solo cello work. Herman D. Koppel's theme and rhythmic drive are constantly present, but the material has also been read with Benjamin Koppel's jazz spectacles. The result is far from lush crossover lounge music, it is bold, demanding, Nordic and infectious.

In his jazz/classical ensemble Mad Cows Sing, Benjamin Koppel has written music with cello for many years, and through this ensemble, among other ways, has built up the feeling for and understanding of the cello that is in fact a precondition for composing interesting music for acoustic instruments. It doesn't mean that the music necessarily becomes better when the composer so to speak rubs the instrument the right way. Often in fact quite the opposite is true, and neither Herman's nor Benjamin's solo pieces are in this respect easy tasks for a cellist. In Professor Herman's Cellistic Imaginarium raw, lyrical reworkings of the theme alter-nate with sly, quiet rhythmic passages, interrupted by two extraordinarily tumultuous culmina-tions where the composer - and the cellist - pull out the plums.