The ocean seems to flow through Sunleif Rasmussen's symphony, which was awarded the Nordic Council's Music Prize in 2002. The music grows in wave-like motions and gathers into towers of sound analogous to the surf breaking on the Faroese shore, the composer's inexhaustible source of inspiration. In the saxophone concerto Dem Licht entgegen from 2001, the composer focuses on an indefinable movement towards the light. 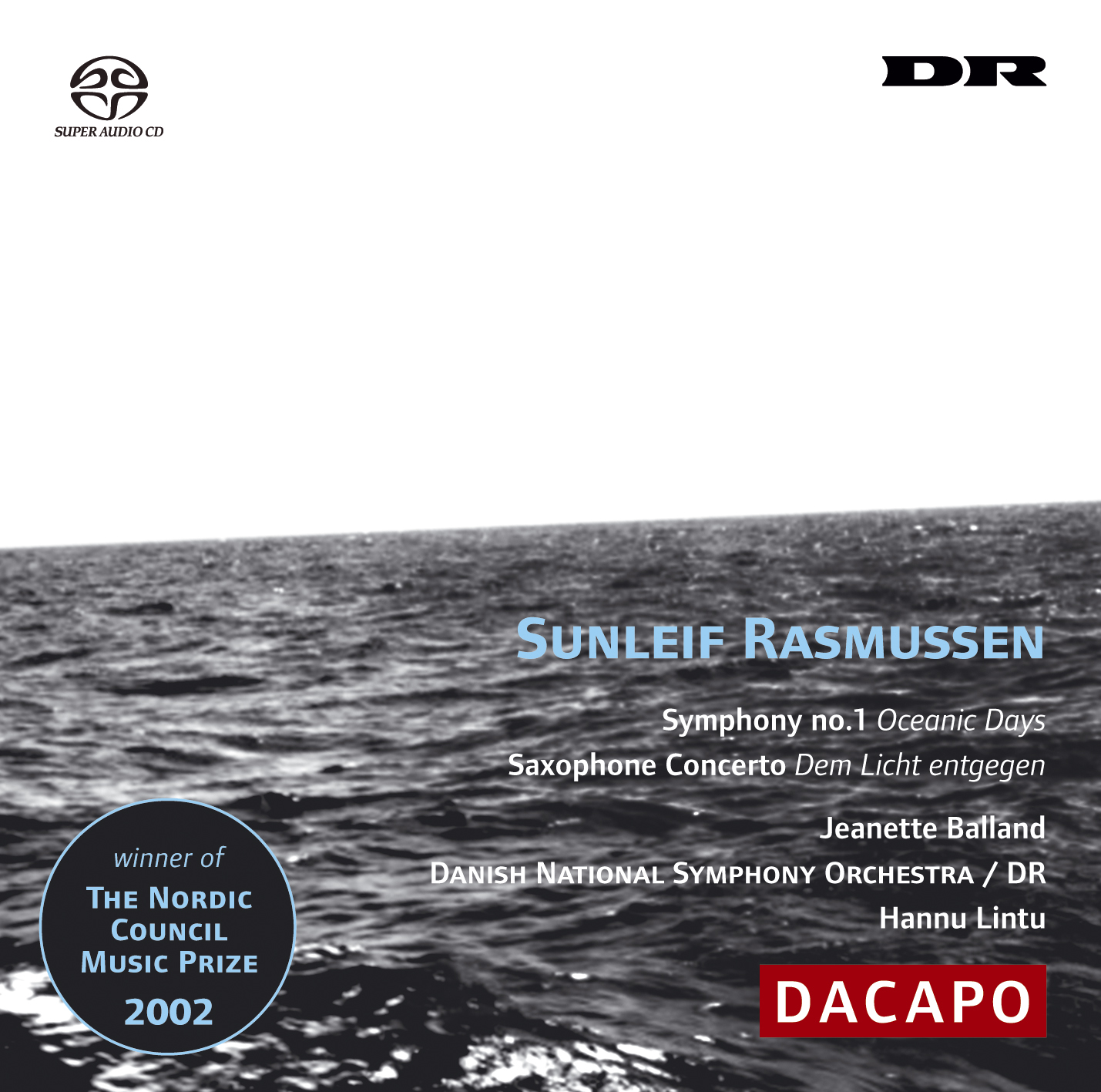 Art music from the Faroe Islands is arelatively new phenomenon that has first and foremost appeared on the mapbecause the Nordic Council's Music Prize went in 2002 to the Faroese composerSunleif Rasmussen (b. 1961) for his Symphony no. 1, OceanicDays. Sunleif Rasmussen belongs to the new generationof Nordic composers and is the first and so far the only conservatory-trainedFaroese composer. His musical background is as an experimental rock and jazzmusician, but at the beginning of the 1980s he began to take an interest in contemporaryart music. His earliest works are mainly for choir, solo instruments andsmallish ensembles. From 1990 until 1995 Rasmussen studied composition at theRoyal Danish Academy of Music in Copenhagen with Ib Nørholm and electronicmusic with Ivar Frounberg. In this period he was introduced to ‘spectral music'and one of its foremost exponents, the Frenchman Tristan Murail (b. 1947). Overthe next few years the composition principles of this style could be heard inSunleif Rasmussen's music, first in the work Somden gyldne sol (Like the golden sun)(1993) for piano and effect processor, Landi (The Land) for orchestra and soprano solo (1992-93)and Eitt ljóser kveikt (A candle is lit) for organ and audiotape (1993).

The Faroese landscape is a central featurein Sunleif Rasmussen's work, and is present in the music at several levels.Often the sounds of nature are painted with a decided complexity which givesthe soundscapes of the music associations with sea, birds, wind and grass. Manyof his works also have titles that refer to and evoke phenomena from nature.But it is above all Sunleif Rasmussen's use of traditional melodies from theFaroes that has coloured his composition process and works for the past tenyears. The traditional melodies have an overall effect on the form and durationof the music. The sonorities and melodic material of the works are derived fromthe overtone spectrum of the melodies, since each note of the traditionalmelody is reflected by its harmonic spectrum. From the interval relationshipsof the old melody, too, come the characteristic rhythmic segments which areused isorhythmically, i.e. they permeate the music. In some works theserhythmic segments are coupled with the original rhythm of the traditionalmelody, so that one now and then hears the traditional stress rhythms in Rasmussen'smodern textures. Sunleif Rasmussen's composition technique is thus a kind of‘quotation' technique where several of the layers of the music are determinedby the selected melody. The melody becomes the ‘primal theme' of thecomposition, the note sources from which all the material arises. The old melodiesand the element of traditional folk music cannot be directly heard in thefinished works. Instead Rasmussen uses what he calls a \\hidden passacagliatheme\\, since it forms an inaudible series of bass notes that permeates themusic.

Symphony no. 1, OceanicDays, was com--posed in 1995-97 as a commissionfrom the Nordic House in the Faroes. The symphony was given its first performancein the house by the Icelandic Symphony Orchestra, but not until 2000.

The symphony form is often a type of workwhere the technical compositional resources are put to a formal test, andRasmussen's -symphony is indeed a focal point, a stock-taking of his music andcomposing technique at that juncture.

The title ofthe symphony refers directly to the title of a poem by the Faroese writer andall-round artist William Heinesen (1900-1991), It's again one of these Oceanic days. Heinesen's prose and poems are animportant source of inspiration for Sunleif Rasmussen, and have left theirmarks on his vocal music (he used texts by Heinesen for Dedication (1995) and Arctic (1998) for ensemble and mezzo-sopranosolo) and his instrumental music. It's again one of these Oceanic days is a tribute to life, and the ocean is used as ametaphor for the contradictions and absurdities of life.

A recurringcharacteristic of the formal progression of the music is a musical‘fracturedness', a flow of music that is not divided into traditionally roundedsections, but typified by contrasting movement elements and sudden shifts indynamics. The music takes its point of departure in nothingness and grows inundulating motions that stiffen into sound-masses, an analogy with the surfbreaking on the beach.

The instrumentation is characterized bydevelopment, where the first and second movement leave space for soloists andmajor solo passages, but are also marked by a concertante dialogue betweensoloists and orchestra. The third movement is reserved for the orchestra as awhole, which in the middle of the movement gives way to the tuba, this brassgiant which the composer sees as a parallel to the mammoth of the sea, the bluewhale.

At one point in the movement it isstipulated that the string players are to sing their parts while they play. Incombination with the huge sound-masses of the movement this could be seen ashumanity singing in - and with - the music of nature - a manifestation ofmankind's belonging to the natural world, as an analogy with Heinesen's poem:

Doyou hear the thousand-voiced chorale of thehear aboutwhat we ever must acknowledge: Mightyis life, themagic intersection of past and future amidstwhich you stand with your living self's exuberant butterrible gift!

As a basis for the symphony Rasmussenhas used melodies representative of two melodic types in the Faroese songtradition: the secular ballad, exemplified by the melody of the ballad of HerrSinklar (Mr. Sinklar), and the sacred song, exemplifiedby the hymn Jeg ligger her i stor elende (I lie here in great wretchedness). As well as forming the basis ofthe rhythmic and melodic material of the music, the meaning of the two songsalso affects the course of the music. The music that relates to the ballad ofHerr Sinklar is in relatively fast tempos and has a generally bright character.The music that is derived from the hymn is in relatively slow tempos with agenerally dark, lyrical character.

In this way Sunleif Rasmussen gives thetwo themes specific functions that correspond to the functions the melodies hadin the old Faroese peasant society.

The saxophone concerto DemLicht entgegen (2001) is one of Rasmussen's morerecent works, and represents a more mature, finely-honed version of hiscompositional principle. The precompositional material was extracted from amelodic variant of the hymn Som den gyldne sol frembryder (As the golden sun breaks out).

The title links up with the ‘primal theme'and indicates that in the course of the work we experience motion towards thelight. This motion is achieved by giving the music a constantly ascendingmelodic tendency. The movement from the depths to the higher strata isreinforced by the fact that the soloist is to play the baritone, tenor, altoand soprano sax respectively in the first, second, third and fourth movements.

The first movement begins with primalrhythms in the low register of the orchestra for the instruments piano, celli,double-bass, bassoon and bass clarinet. The movement is further characterizedby lively solo lines, and ends with the entry of the whole orchestra.

The second movement has a lyricalcharacter. The music conveys this marvellously by having the musicians in theviola and violin groups singing in unison with their melodies while thesaxophonist plays themes over them. This textural technique can also be heardin the symphony, and forms a climax in this work. At the end of the movementthe vibraphone and tubular bells enter to underscore the sacral element in themusic.

The third movement is coloured by echoeffects, since part of the orchestra is placed farthest back on the stage in aconstant interplay with the other musicians. This is the work's ‘chamber music'movement, with solo cadenzas for the saxophone and accompaniment by a windquintet, and in general this is a movement of faraway, reflective music.

The fourth movement (Allegrocon brio) can be heard as a traditional finale,since there is a constant alternation between tutti and solo passages in a Baroque-likeconcerto form.

InSunleif Rasmussen's music we hear a combination of technique, content andsignificance - a unity of music and meaning from the same basic material. Theold melodies are not simply tonal material for the works, but through their meaning-contentare inextricably bound up with the processes and compositional models of theworks. In his music the original theme is thus awakened to life in brand newsurroundings.