An Amerikaner in Danmark

An Amerikaner in Danmark

The composer Andy Pape (b. 1955) was born in Hollywood, California but came to Denmark to study in 1971 and ended up making his home in this small Nordic country. The title work of this CD, An Amerikaner in Danmark, is not just a reference to the composer himself, but also a humorous and brilliantly orchestrated tribute to the composer George Gershwin. It is presented on this world premiere recording together with the tuba concerto Suburban Nightmares and the bassoon concerto Traces of Time Lost. 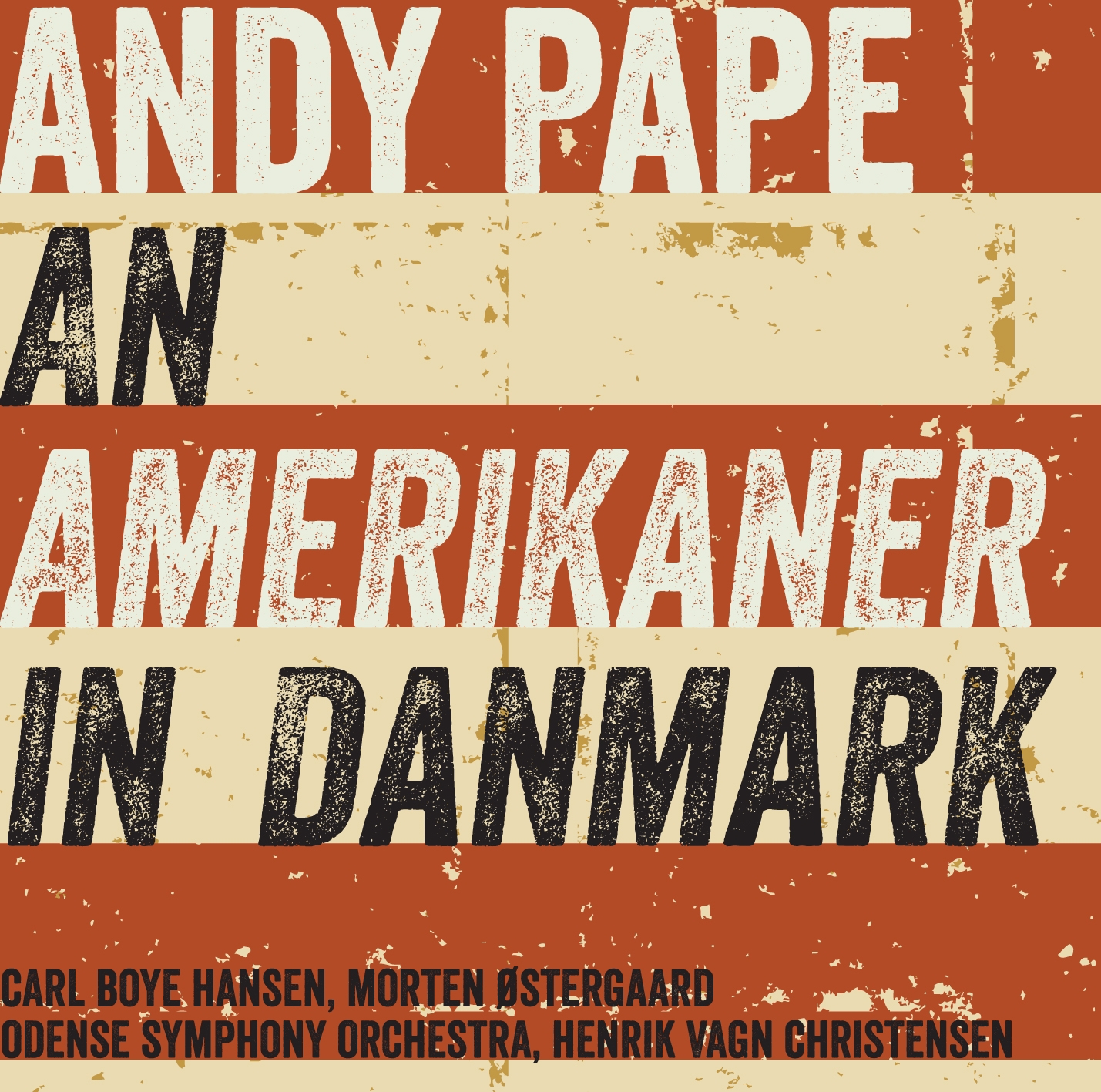 AN AMERIKANER IN DANMARK

Andy Pape (b. 1955) was born in the movie capital Hollywood, but at the age of fifteen moved with his family to Denmark, and has been active there ever since. In the mid-70s he studied musicology for a couple of years at the University of Copenhagen, but decided on an artistic career and in 1987 took his diploma in composition at the Royal Danish Academy of Music in Copenhagen.

Andy Pape is something of an outsider in Danish music, but that is only superficially due to his American childhood or the Russian roots in his family background. One could of course regard his use of elements from several of the idioms of popular music or of aspects of American minimalism as a special American DNA, but it is clear that he draws on material from European traditions and thinking with the same inevitability. In fact it rather seems that the absence of commitment to any specific cultural norm is the nutrient for his creativity. And to this we can add yet another personal characteristic, an element of theatre, of role-playing, of serious play, one could say, whether he is writing drama or so-called ‘absolute’ music. There can hardly be said to be a throng of modern concert-hall composers whose music radiates the elementary joy of creation, but Andy Pape is one of them. Here we find no comprehensive foundation of musical theory or ideological-philosophical deliberations on modernity and ‘contemporaneity’, but we do find enduring virtues like vitality, charisma, an appetite for life and – in the best sense of the word – manoeuvrability through the classical music landscape.

Andy Pape’s wingspan is wide in terms of expression and genre in orchestral and chamber music, in choral music, solo works, music drama and music for films. As a music dramatist he is among the most productive and versatile in the country, and so far several of his seven theatrical works associated with the opera genre have aroused considerable attention. This is particularly true of the street opera Houdini the Great, about the legendary magician and escapologist who was active at the beginning of the last century, written in 1988 in collaboration with the all-round performer Erik Clausen and later played innumerable times in various parts of the world. And with its light-footed leaps into mythological material, the children’s or family opera Sigurd the Dragonslayer (2005) maintains a credibility with its primarily young target group that is free of both didacticism and any faux-juvenile tone. And these are both very much mobile chamber operas; only a few singers, a small instrumental ensemble and a minimum of theatrical technology are in play. Andy Pape is well aware that even with greatly limited resources one can compose relevant emotions on the outsize scale. But he has also successfully courted the classic opera form with orchestra in the expressive drama Leonora Christine – Queen of the Blue Tower (1998) with a libretto by Nina Malinovski.

The early collaboration with the left-wing street performer, film director and actor Erik Clausen is telling, for much of Pape’s attitude to the meaning of artistic expression recalls the activities of this popular film-maker. An impactful communicative ability, a sense of solidarity and unsnobbish humour are things they share. In 1994 Pape adapted music by Carl Nielsen for Clausen’s film My Childhood Symphony, based on Nielsen’s charming memoirs, and this comes as close to Danish music’s sense of self as can be imagined.

Leonard Bernstein wrote a famous fictive interview with George Gershwin and gave it the ironic heading: “Why Don’t You Run Upstairs and Write a Nice Gershwin Tune?” The point is obvious: anyone who thinks it’s an easy matter to imitate Gershwin’s immortal catchy melodies really has to think again. When Pape sends a professional nod to the man who was perhaps the greatest musical name in his country of birth and his An American in Paris, he does so with a similar self-ironic gesture. For the pawky title of Pape’s witty, brilliantly orchestrated tribute to Gershwin, An Amerikaner in Danmark (2003) is something he would prefer to hear pronounced “in Danish with a thick American accent”. He describes the piece as a kind of rhapsody with unmistakable quotations not only from Gershwin’s standards, but also from popular Danish songs and from his own music – as well as that of several Danish colleagues.

The concerto for tuba and orchestra from 2006 grew out of the collaboration with the winds of the Odense Symphony Orchestra in An Amerikaner in Danmark, and here too Pape has chosen an unusual title, Suburban Nightmares. But if this turns one’s thoughts in the direction of thrillers or TV crime series, one is wholly on the wrong track. The words of the title have a quite special, almost private and metaphorical meaning for Pape. He describes the concept “suburb” as a symbol of “man’s eternal attempt to surround himself with security” – the suburb as a place of shelter from both the noise and violence of the city and the brooding loneliness of the countryside. And the word “nightmare” refers on the other hand to the fear everyone knows as a condition of life: that security can be lost. These emotional climates are contrasted starkly in the two large middle movements, while two short outer movements form a sober prelude and an epilogue.

In the bassoon concerto Traces of Time Lost (1998) yet another fundamental condition of life is in focus: omnipresent time; the time which, since ‘the Big Bang’, just passes or runs on, is killed or wasted, is empty or full, measurable or intangible, goal-oriented or a circle in motion. Composing music is in a way always a duel with time, an effort to tame it and dam it up, to fix it, to repeat it in notes, indeed actually to exorcise this painful condition of life – that time is constantly running out, and that it takes us with it.

Andy Pape himself describes the distinctive experience of time for which he has tried to find musical expression as follows:

“In the first movement the bassoon is the point of departure for all time, in the understanding that the orchestra functions as a huge ‘echo valley’. But no ordinary echo valley. The echo becomes not only fainter, but slower and higher; sometimes the echo transposes the pitch. In the second movement the bassoon plays the endless melody of time in an ever ascending spiral that starts in the lowest register and ends in the highest one – a melody that is always like itself yet never quite the same; a melody that has always been there and always will be there. In the third movement the bassoon moves out of the eye of the hurricane of time and out into the actual flow of time; to where things ‘happen’ in relentless and strangely unpredictable ways, just as we who live in time every day know it.”

Given the way Andy Pape handles those habitually slashed contrasts of cultural life, ‘highbrow/lowbrow’, they are not only rather meaningless labels, but risk becoming a symptom of an attitude to art that is at one moment afraid of being sophisticated and pretentious, at the next moment of being vulgar and banal; afraid of snobbery, afraid of inverted snobbery. In 1928, on a journey in Europe, George Gershwin visited Alban Berg in Vienna. Berg asked Gershwin to give some samples of his own music at the piano, but Gershwin hesitated – he was unsure of himself in the presence of the man behind the overwhelming operatic drama Wozzeck. Berg looked hard at him and said: “Music is music!”

The composer Karl Aage Rasmussen is Professor emeritus of Composition at the Royal Academy of Music in Aarhus. He has also held many other posts in Danish cultural life and is the author of several books on music and musicians.