Here is the second volume of The Young Danish String Quartet's highly acclaimed miniseries of Carl Nielsen's string quartets. The first volume in The Young Danish String Quartet's mini-series of Carl Nielsen's quartets was selected as Editor's Choice in Gramophone last summer, and a number of prestigious magazines and newspapers from all over the world agreed: This interpretation of Nielsen's string quartets sheds brilliant new light on Denmark's national composer.\\\
Buy album 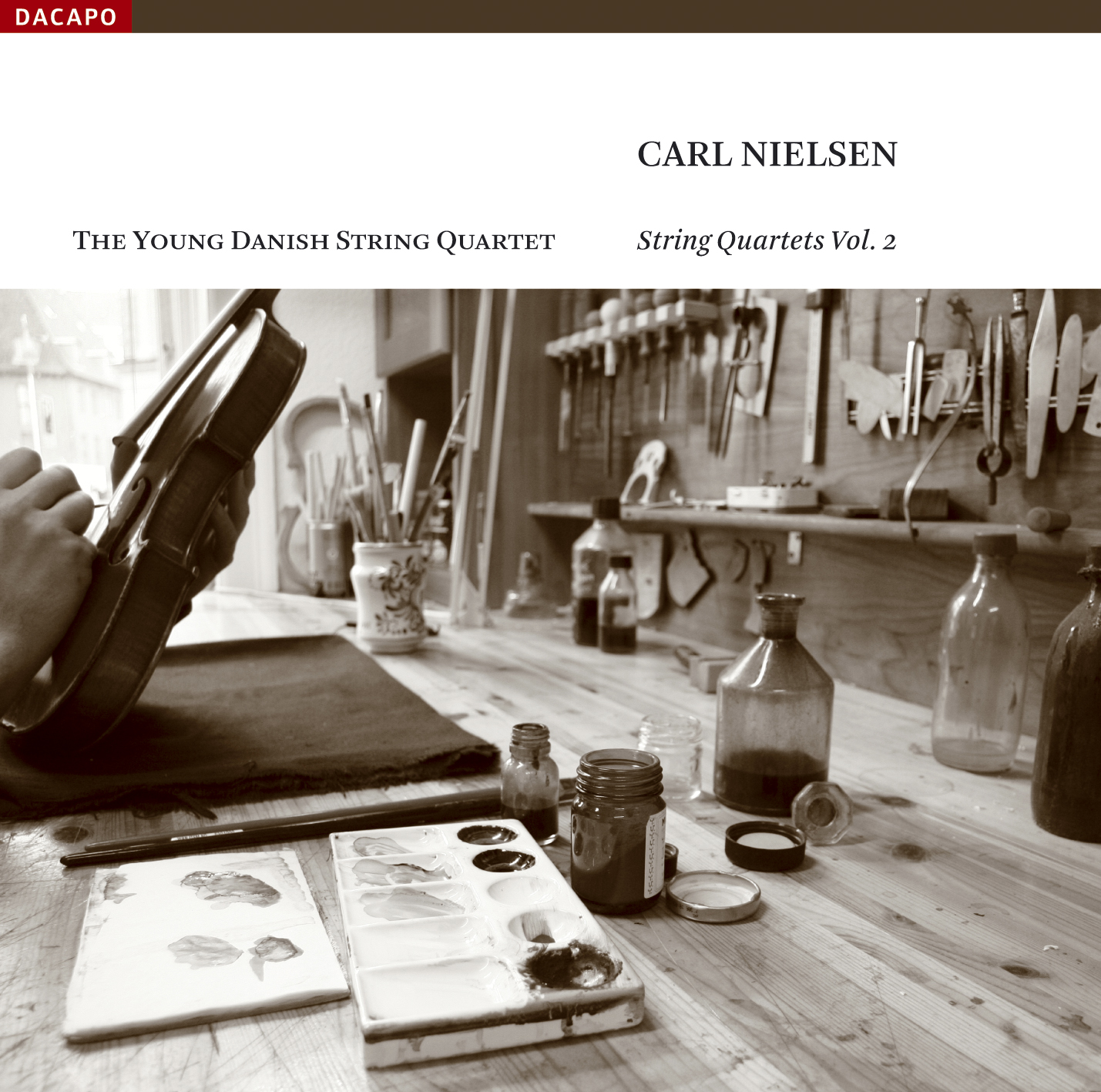 Although most of a decade separates the two stringquartets by Carl Nielsen (1865-1931) recorded here, like the other two quartetsin his official worklist they belong to the more youthful end of his oeuvre. Asa mature composer he did at one point in the 1920s consider plans for yetanother quartet. But he abandoned them in the -middle of bar 31 of what waspresumably to have been a first movement, and threw himself into otherprojects.

The F minor quartet is from 1890, whenthe young, still unmarried composer was able to enjoy a regular salary again,now as a violinist in the Royal Danish Orchestra, something he had not donesince stopping as a regimental musician in Odense to go to the Royal DanishAcademy of Music in Copenhagen. There had also been another stroke of luck:applying for the second time, he had been awarded the biggest grant in Danishcultural life, Det Ancherske Legat, worth DKr 1800 - by comparison his annual salary as an orchestramusician was DKr 1200.

With leave of absence from the RoyalTheatre, Nielsen was able to set his course for Germany on 3rd September 1890.In his trunk he had a letter of recommendation from the composer Niels W. Gade,whose name was at least as famous in Germany as in Denmark, as well as themanuscript of the F minor quartet. He had begun work on it that spring, and hadin fact meant to finish it before his departure. He had even worked on it inhis summer holidays with his parents in the Funen village of Nørre Lyndelse.Nevertheless only the first movement was really finished.

The remainder of the work was writtenamidst a tumult of new impressions, for on this first journey outside theborders of his native country the 25-year-old composer was hungry for all kindsof artistic impulses, and received them in Dresden, Leipzig and Berlin in turn.In Dresden, for example, he was at the Gemäldegalerie on 5th September, where according to his diary he was greatly takenwith Rembrandt's The Gold Weigher and Jusepe de Ribera's Diogenes with HisLantern. And in the rough draft of the fourthmovement of the quartet we find a handwritten remark that clearly documentsthat he himself felt there was a connection between the two arts: The 2ndtime the secondary subject does not come; a snatch of the coda in the firstpart appears as such, but with many odd harmonies. Remember ‘odd', little Carl.Think of Ribèra!!\\ The inspiration could also be of a more outward kind; afteran elevated soirée on 26th September at the ‘Böhmischer Bahnhof' Nielsen wenthome and composed an expansion of the first subject of the last movement, whichhad occurred to him on the way.

More or less finished with the quartet,and armed with Gade's introduction, Nielsen now looked up one of the leadingmusical personalities of the day in Berlin, the conductor and composer JosephJoachim (1831-1907). He had known Gade since their youth and promised to listento and comment on the new work. So after five rehearsals an ad-hoc ensemble(Nielsen himself, Fini Henriques, Frederik Schnedler-Petersen and the Americancellist Paul Henry Morgan) gave the work its informal christening on 18thDecember at the Hochschule für Ausübende Tonkunst, where Joachim was a highly esteemed teacher.

\\It isextremely difficult to play well, since there are so many modulations and oftenenharmonic affairs that have to be played so purely that the half of it wouldhave been enough. If you add to this the fear of playing for Joachim, you canimagine that it did not go all that well,\\ Nielsen wrote back afterwards to hisold theory teacher from the academy years, Orla Rosenhoff. In other wordsNielsen knew very well what made - and still makes - his quartets difficult toplay.

The old master responded with bothpraise and criticism; he recognized both imagination and talent in the music, buton the whole it was too radical for him, and he wanted to suggest some changes.Nielsen replied that he was afraid the work would lose its character, and thegood-natured Joachim seems to have retreated: \\Well, my dear Mr Nielsen,perhaps I am after all an old philistine. Write as you will, just as long asthat is how you feel it.\\

The young Nielsen stood his ground. TheDanish newspaper reviewers, who otherwise often scolded him, were neverthelesssurprisingly positive when the quartet was given its first public performancein Copenhagen on 8th April 1892. Most unreserved was Politiken's Charles Kjerulf: \\Carl Nielsen is clearly a considerable talent;none of his works has shown him as assured as this quartet, which besides themost youthful dauntlessness exhibits a will and skill matched by very few ofthe works of our other very young composers.\\

The F minor quartet was printed by thepublisher Wilhelm Hansen in 1892 and could now be performed by ensembles whodid not first have to borrow the manuscript music from the composer. In October1894 when Nielsen, in the company of the music publisher Alfred Wilhelm Hansen,ran into the great Belgian violinist Eugène Ysaÿe (1858-1931) in the railwaystation in Leipzig after hearing him play earlier that evening in theGewandhaus, the latter immediately declared that Nielsen was not wholly unknownto him - he had recently heard the F minor quartet performed in Nice, had likedit and had procured the music. As proof he hummed the beginning of the firstmovement! Ysaÿe may have later done more than simply hum: the four stringplayers in one of the top ensembles of the day, the Quatuorde Bruxelles, had a shared point of departure inmaster classes with Ysaÿe, and a few years later they put the F minor quarteton their repertoire. They first played it at a concert in Copenhagen on 13thFebruary 1909, then later the same year they presented it in Mexico City andBuenos Aires. Thus it also became the only one of the four string quartets everto cross the Atlantic during the composer's lifetime.

The E flat major quartet (composed in1897-98) is associated with a tragicomic episode that meant that the birth ofthe work was drawn out longer than anticipated. The composer himself has givenan account of it, but only far later, in a retrospective article marking hissixtieth birthday in 1925:

\\I had composed a string quartet. Thefirst two movements had already been copied by the music copyist; I had triedthem out with my comrades, and we agreed that it was a work with which I hadmade a great effort. Now I also had the last two movements finished, so Ipacked it all into a large roll, took my bike and set off along Gothersgadetowards Nørrevold, where the music copyist lived. When I got to RosenborgBrøndanstalt [a mineral water factory], I saw a vehicle with two horses, one ofwhich had fallen over and lay floundering with its legs in over the pavement.The driver looked very helpless, as the horse had ended up lying in a strangelopsided position. Since as a young man I had worked with horses and had oftenmyself been a driver, I jumped off my bike, put it up against the Brøndanstalt,shoved my music roll into the hands of a boy who was standing in the crowd, andasked him to hold it for a moment. It was only the work of a couple of minutesto cut one of the traces of the cart over, get a horse blanket under theforelegs of the horse and get it up on its legs; but when I got back the boyhad vanished, probably into the Vognmagergade area, with my great work. I rodehome in despair and told my wife about my loss. Then she got the idea that weshould go up into the neighbourhood and arouse some attention about the matteramong the young people of the streets, and in time we succeeded in gathering avery large crowd to whom we announced that whoever could find the boy with theroll of music would get a large reward [...] However, I never got my work back,but had to reconstruct it laboriously from various notes and sketches and frommemory.\\

Theepisode must have taken place in the autumn of 1898, but cannot be directlydocumented by contemporary sources. They only mention the preceding work:\\Finished the work on the first movement of a quartet in E flat major inDecember ‘97. Am working on the andante at present,\\ the composer had noted inhis diary on 6th January 1898. Nevertheless a good part of the year evidentlypassed before he was ready to saddle up his bicycle with the finished score. Hehad met his wife Anne Marie, who was a sculptress, in 1891 in Paris, during theabove-mentioned study trip. Now in this very year, in the summer of 1898, theyhad one of their periods of friction, for reasons that are not hard tounderstand. He spent his holiday from the Royal Theatre on her family's farm inJutland, where he tried at one and the same time to keep the farm going and towrite a string quartet, while she stayed at home in Copenhagen to take care ofher sculptural work - she was modelling a red stallion - and their three smallchildren. \\Can't you see and get your final movement done and I'll be busy withmy horse and then we'll never again spend a summer like this year's, will we,my own dearest?\\ she had written to him on 2nd August in a clear attempt atreconciliation.

We do not know exactly how long it tookNielsen to reconstruct the last two movements of the quartet, for it isunlikely to have been true when he described the work as in the process ofpublication in an application for a ministerial composer subsidy dated 7thNovember 1898. He did not hand in the score to Wilhelm Hansen until the earlysummer of 1899, and the printed edition was not available until December 1900.On the title page the work was then dedicated to his older colleague EdvardGrieg, who was among the family's circle of friends.

By then the quartet had already seen asemi-private first performance on 1st May 1899 in the relatively newly-founded VorForening. The public one was given by thenewly-formed Høeberg Quartet on 4th October 1901, also in Copenhagen. Thelatter elicited a very clear-sighted review in IllustreretTidende, written by the almost ten-years-olderHother Ploug, who alongside a career in the central administration also workedas a music writer and composer:

\\A strange work, like everything thathas come from his hand, but more a work for connoisseurs than for the generalpublic. In particular, the energetic first allegro with its enclosed structureand the highly convoluted contrapuntal work proved caviare to the general....Here we meet a young Danish composer with a sense of form and the sculpturalnot strongly evident in many others at present than perhaps Johan Svendsen, andpeople are repelled by it. In a way this is explicable enough: when one isbottle-fed day in and day out with ‘romances' and romance-like music, in theend one forfeits the feeling for stronger fare.\\

Caviare to the general or not - duringthe composer's lifetime the E flat major quartet remained the most criticallyacclaimed, but also the least performed of the works!

The musical material from the Carl Nielsen Edition was used for this production.

This SACD has been recorded in cooperation with the The Danish Broadcasting Company.
Array ( )
randomness