Rued Langgaard (1893–1952) was an odd, lonely figure in Danish music. His 16 symphonies make up a thought-provoking, original contribution to the history of the symphony - on the borderline between Romantic idealism and beauty on the one hand and the doubt, frag-mentation and absuridty of the modern world on the other. The works on this CD show the sudden rupture in Langgaard's music between Sympony No. 6, a major Expressionistic work in Danish music, and its two extremely retrospective successors, which are the composer's demonstrative counterblast to the Neoclassical trend of the 1920s. 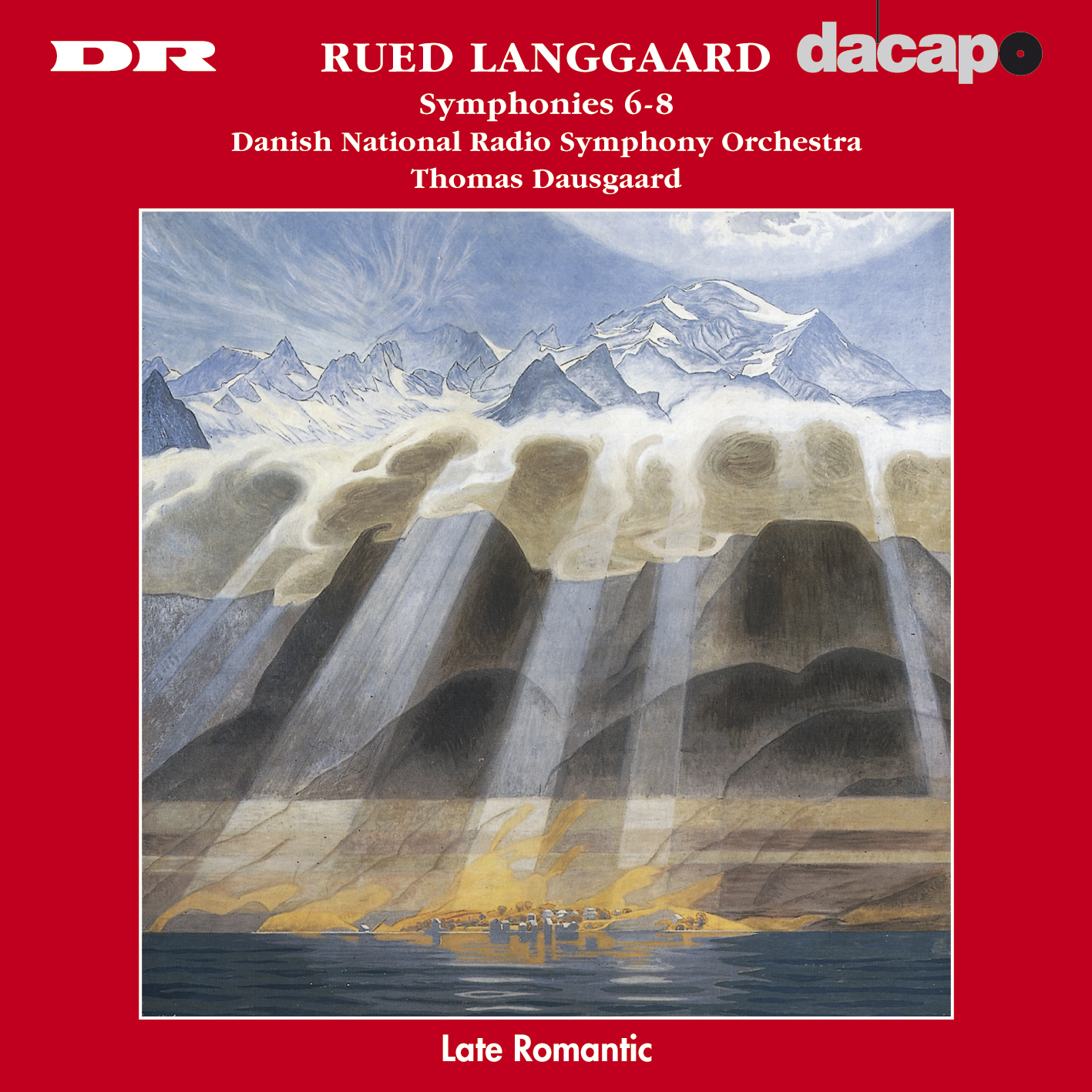 One has to look hard through the music of the twentieth century to find as long, distinctive and varied a series of symphonies as Langgaard’s. With 16 numbered symphonies – composed in 1908-1951 – he has only been exceeded quantitatively on Danish soil by Niels Viggo Bentzon (1919-2000), who reached number 24. Langgaard’s symphonies vary enormously in duration, form and tonal idiom. No clear development from No. 1 to No. 16 is evident, but there are interfaces between Symphonies 3 and 4, 6 and 7 and 10 and 11. The formal extremes are the great Late Romantic Symphony No. 1 (60 mins.) and the monothematic one-movement Symphony No. 11 (6 mins.). There are vocal elements in Symphonies 2, 3, 8, 14 and 15, and Symphony No. 3 is in reality a piano concerto. In the musical style, the Romantic and Late Romantic preponderate, but there are striking examples of forms of expression that are a match for the progressive idioms of the period (Symphony No. 6 and the beginning of No. 15). Langgaard had no wish to create an independent, original, modern musical language. On the contrary, he deliberately took his point of departure in the legacy of Gade, Wagner, Tchaikovsky and Richard Strauss. On the face of it some of the works in fact sound as if they were composed 50-75 years too late. But viewed as a whole Langgaard’s symphonic cycle is an original and thought-provoking contribution to the musical history of the twentieth century. In the first six symphonies he tries out the possibilities of the genre in very different styles. From Symphony No. 7 the outsider emerges in earnest with the paradoxical and hazardous project of demonstrating the continued relevance and potential of the Romantic aesthetic in a modern, secularized age.

The tonal idiom of the Romantic epoch exhibits ‘truth’ in Langgaard’s view, because it communicates a spiritual message that is generally comprehensible. Langgaard therefore culls all the shelves of Romanticism uninhibitedly, but often gives the familiar a special new emphasis and puts it in an unconventional setting, such that the demonstrative, abrupt and theatrical emerge. One feels a sense of awe, but also of distance from the Romantic clichés. In order to be understood, Langgaard felt that he had to go to extremes, and with Symphonies 11 and 12 in particular the concept of the symphony is pushed to the point of absurdity. Thus Langgaard sacrifices his own role as declared exponent of a harmonious message of beauty. The conservative, nostalgic composer at the same time becomes a modern ‘divided’ composer who relates with seismographic sensitivity, if not desperation, to his time and his isolated situation.

The concept of Late Romanticism is not adequate to Langgaard’s symphonies if in using it one thinks of organic breadth, great contrasts and symphonic climaxes. Langgaard is as a rule firm and succinct in his formulations and rhapsodic in his form. One can see an affinity with ‘effective’ utility music like Korngold’s film music or Prokofiev’s ballet music; but unlike Korngold, Langgaard eschews all sentimentality. It is characteristic that the symphonies begin pithily and clearly – there are no slow, searching introductions. And it is the mood and character of the beginning that institute the development of a work, not a predetermined form such as sonata form. With the one-movement form he often uses, Langgaard can maintain an evocative world peculiar to the work throughout its course.

The colourful titles express an insistence that music has a meaning beyond the musical, a mission religious in nature. Although Langgaard only began his career after the Symbolist epoch around 1900, it has proved fruitful to see Langgaard as a Symbolist artist. Each of the various stylistic idioms has its own symbolic meaning, and the sixteen works shed light on one another, together forming a universe with its own fascinating coherence.

Symphony No. 6 was composed in 1919-20 in its first version with the designation Symphony No. 5 and no descriptive title. The well-attended first performance was given in Karlsruhe in January 1923 with the composer conducting. The first performance in Copenhagen on 26th September 1923 (by the visiting Blüthner Orchestra from Berlin) was on the other hand something of a scandal. After the performance, which Langgaard himself conducted, there was loud hissing and only lukewarm applause. A leading newspaper wrote that it was a “fanatically questing musician’s struggle to say the unsayable” and that it was “terrible to listen to”. Up to 1930 Langgaard shortened and revised the work, and further retouching was done shortly before the symphony was printed in 1946, as one of the few works to be printed during Langgaard’s lifetime. The title The Heaven-Rending, a polemical reference to Carl Nielsen’s The Inextinguishable (Symphony No. 4, 1916), was added around 1930. For a concert performance in 1949 Langgaard supplemented the title with an explanatory motto based on a Bible and hymn quotation: “Then Our Jesus intervened with power and rent the rending army of evil in the Heavens”. Langgaard conceded he had been inspired by Carl Nielsen’s symphony, but whereas Nielsen spoke of the music as an expression of the primal force of life itself, Langgaard emphasizes the Christian aspect, the struggle between good and evil. The character indications in the score – for example corrosif, magnificamente, frenetico – stress this.

The work is initiated with the contrast between a serene, harmonious “Subject, Version I” and a dissonant, unstable “Subject, Version II”. This is followed by five “variations” based on central intervals and motifs from the two subjects. There are eight trumpets in the orchestra, two sets of timpani, and an organ which reinforces the brasses, especially at the ending with the heading glorificazione, where F major’s victory over the ‘atonal evil’ is proclaimed. “It sounds like modern music, but isn’t”, said Rued Langgaard of the symphony.

Symphony No. 6 is however Langgaard’s most avantgarde-like symphony, and is regarded today as a masterpiece of the Danish music of the inter-war years. The conflictual material in Langgaard’s works of the years just after the First World War was linked with personally determined, apocalyptic ideas, Large parts of the work were for example re-used in the opera Antichrist (1921-23). If one were to relate the music to one of the international “isms”, it would have to be Expressionism. The Danish failure of the symphony and the fact that Antichrist was not staged (until 1999), must have contributed to Langgaard’s drastic shift in style around 1925. But it also seems that he was no longer able to continue along the Expressionist path with its complicated religious and deeply personal aspects.

In Symphony No. 7 (F major, 1925-26) he holds the music at arm’s length. The work is Langgaard’s response to the Neoclassical trend of the period, in which clarity, purity and a certain impersonal distance from the composer were ideals. With Langgaard, however, it becomes a kind of simplified Neoromanticism with no use of the sonata form, but in four movements, including both a “funeral march” and a “scherzo”. The symphony had its first performance in 1926 and was printed at Langgaard’s own expense in 1927, and it is the printed version that is recorded here for the first time. In this version the work has no descriptive title.

Langgaard followed this with the static Symphony No. 8 (again in F major), which was eight years in the making and went through innumerable phases before it found its more or less final form in 1934. In 1945 Langgaard sent the original score as a gift to King Christian X on the occasion of the King’s 75th birthday. In 1998 this manuscript was located in the National Archives. With the kind permission of H.M. Queen Margrethe the score has been made available to the musical world and thus for this new recording. The symphony has not yet been given a concert performance, but was recorded for the first time on CD in 1992 on the basis of what was then the only available, highly inadequate score.

The symphony is a fanfare, a tribute to the “Frederiksstaden” complex (founded in 1749) with the Royal Palace of Amalienborg and the church Frederikskirken, in popular parlance “the Marble Church” (completed in 1894). At the age of three Langgaard was ‘dedicated’ as a musician in this church and he made his debut there as an organist in 1905. In the light of memory the area represented for Langgaard an earthly symbol of “the New Jerusalem” which according to the Revelation of St. John appears at the dawn of eternity. After several proposed texts with apocalyptic themes Langgaard ended up putting together a text of his own for the third movement based on stanzas from Johannes Jørgensen (who in turn quotes N.F.S. Grundtvig) and Christian Richardt. The first lines, presented as a solo, in fact present the programme for all of Langgaard’s output from 1925 on: “The golden treasure that once was with trembling hands I raise”. The musical style recalls Mendelssohn and Beethoven (the scherzo movement) and Niels W. Gade, and has a direct borrowing from the main motif from Bruckner’s Symphony No. 3. But although there is no chord and no motif that could not have been written in 1875, the work as a whole – like Langgaard’s Symphony No. 7 – could hardly have been written then.

The music is too extreme and demonstrative, almost conceptual. One could paraphrase the composer and say: “It sounds like Romantic music, but isn’t”.

Publishers: Edition Samfundet (Nos. 6 and 8); Edition Wilhelm Hansen (No. 7)
The musical material from the Langgaard Edition was used for the recording of Symphony No. 8

This CD has been recorded in cooperation with Danmarks Radio