The music of Jesper Koch (b. 1967) is in a constant and fruitful dialogue with the past. Often melodious with tonal connotations and with a dreamlike quality that seeks to escape from reality in the cello concerto Dreamscapes, feels at home in oases of happiness and nostalgia in the violin concerto Arcadia Lost. And finally, the clarinet concerto Lonesome deals with different aspects of loneliness. The three concertos are presented here in world premiere recordings featuring the soloists they were written for. They, in turn, share a deep connection with the Odense Symphony Orchestra, always close to the composer’s heart. 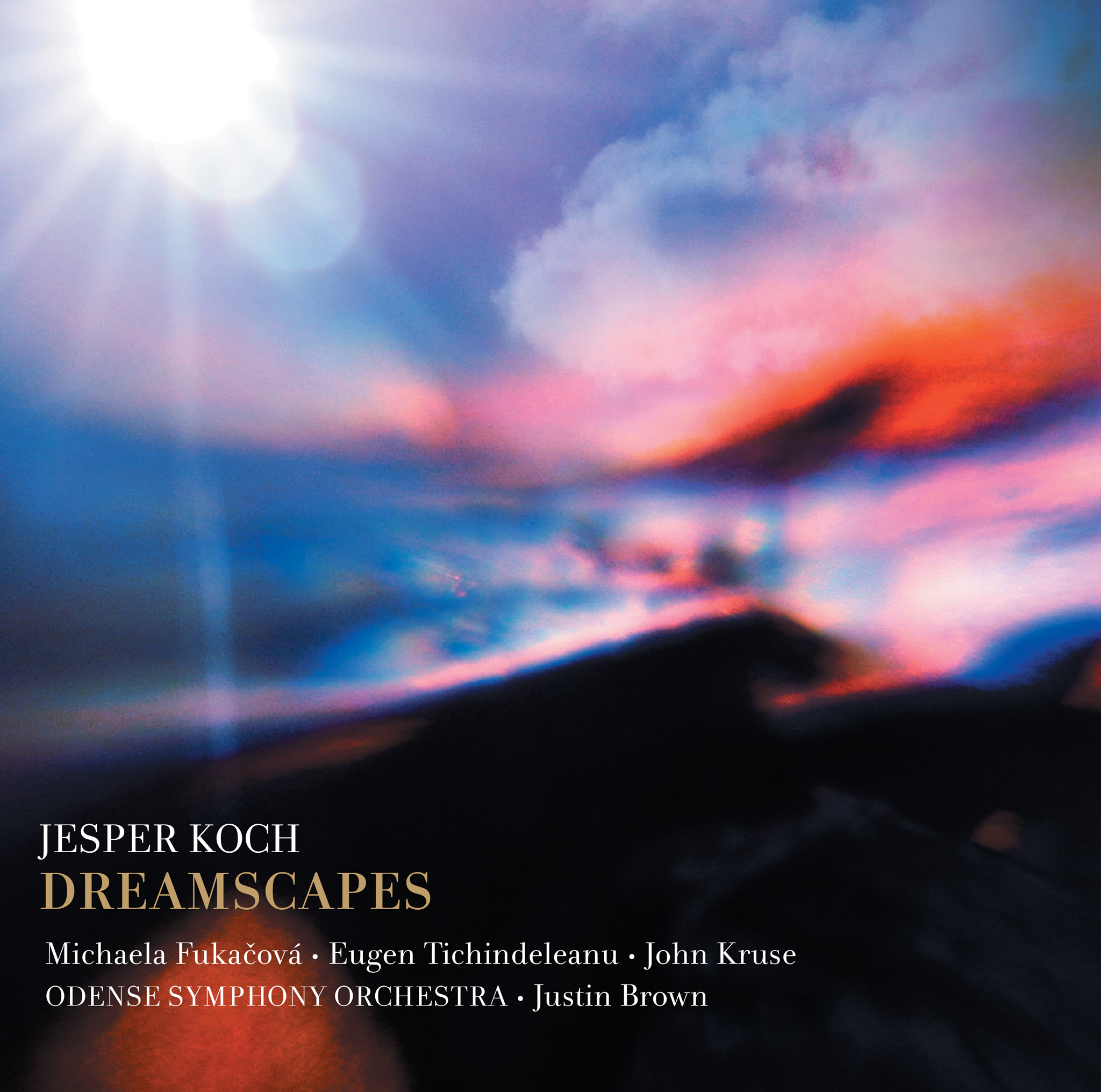 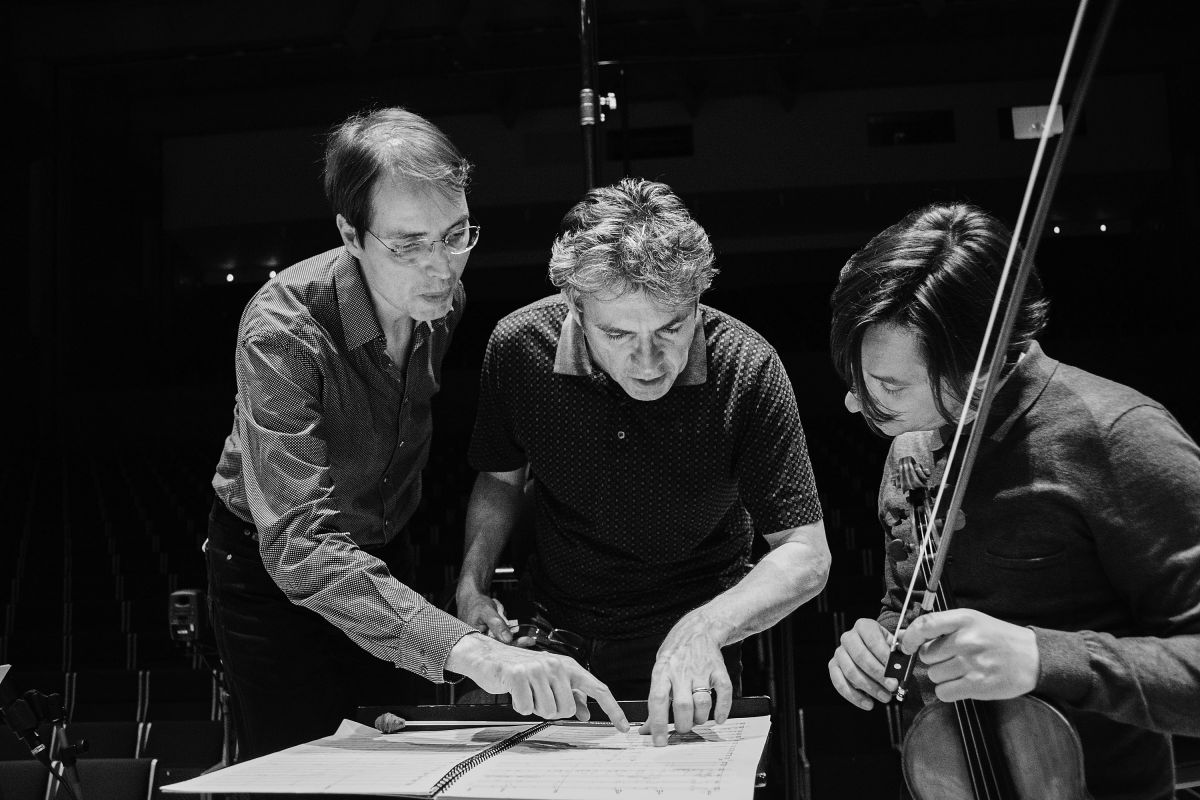 ‘I have always escaped into music,’ the composer Jesper Koch relates. ‘As a boy, I experienced music as the ideal world, and I spent most of my childhood at the piano. The real world didn’t have the same appeal at all.’

Jesper Koch was born in Copenhagen in 1967, and the fascination with the world of dreams has not grown any less over the years. On the contrary, his technical mastery as a composer has offered him an increasing number of opportunities to paint dream pictures and enable the listener to enter other worlds than the real one.

He studied under two of the greatest masters of Danish music, Hans Abrahamsen and Ib Nørholm – as well as under Karl Aage Rasmussen, Olav Anton Thommesen and Colin Matthews. His breakthrough came early, for at the age of 25 he won first prize at the International Rostrum of Composers in Paris in 1992 with the work Ice-Breaking (1991). Since then, Jesper Koch has assiduously written music in many genres, laying the main emphasis on instrumental music, and he feels particularly at ease with the symphony orchestra.

Jesper Koch’s music is melodious and often tonal, which makes perfect sense when so many of his works are dealing with nostalgia and lost dream worlds. With great assurance, he leads the way through a fluid blend of fantasy and reality, and it is no paradox that he clearly becomes himself when he visits the past. The meeting is neither pathetic nor ironic but acquires a poetic ambivalence when what was lost is viewed from the present. Even when his music takes part in a masquerade, the composer does not hide. Always have a keen ear for that ambiguity in Jesper Koch’s captivating and evocative works.

All three solo concertos were dedicated to the performers on this album, including Odense Symphony Orchestra, which over the years has been Jesper Koch’s faithful partner.

The cello concerto Dreamscapes (2005-07) was given its first performance by Odense Symphony Orchestra’s solo cellist Michaela Fukacˇová with Southern Jutland Symphony Orchestra conducted by David Porcelijn, and it is one of Jesper Koch’s most successful works, performed many times in Denmark and abroad. The title Dreamscapes says without further ado that the music is about a flight from reality. At the same time, the concerto has a completely classical format, being divided into three movements and written for a standard-sized orchestra.

The 1st movement, Day-dreaming, starts with a wave of a magic wand from the harp. Based on its five-note motif, the arabesque of the cello grows, and the soloist increasingly loses contact with the earth. A tugging counter-motif attempts to call the day-dreamer back to reality – in a not particularly attractive way! The cello offers resistance in two short cadenzas, but when the harp repeats its five-note motif from the beginning, the soloist, as if at a signal from a hypnotist, sinks back into her day-dream.

In the 2nd movement, Lullaby – interrupted, the cello finds itself in a gently rocking 6/8 beat without wishing to abandon itself to the lullaby the clarinet tries to entice with. The cello leaps up and sets its surroundings into wild movement, with changing, lop-sided time signatures intensifying the impression of a lack of rationality. The conflict seems to be insoluble – but then a way out comes from an unexpected quarter: A flugelhorn, placed behind the stage, sends a message from another world (not unlike the posthorn solo in Mahler’s 3rd Symphony). The cello gratefully responds to the revelation with the soothing siciliano rhythm and finds a natural state of balance. After a beneficial climax, it calms down, accompanied by its sensible companion, the clarinet.

The concerto continues attacca to the 3rd movement, Hungarian Dreams … , where the old tradition for finales in the ‘Hungarian style’ appears in a renewed incarnation. Jesper Koch states that he was in the process of writing his cello concerto when the great Hungarian composer György Ligeti died in 2006, and this caused him to delve down into the music of his Hungarian models: Ligeti, Bartók, and Kodály. Some of their characteristics with changing time signatures, folk-dance rhythms and special orchestration techniques influenced Koch’s cello concerto.

‘I have always referred to the past, and with the cello concerto, I put on a mask and create my own Hungarian carnival. I dive down into something I admire, and filter it through my own consciousness,’ Jesper Koch said, on the occasion of the concerto’s first performance. In the large-scale dream rhapsody of the finale, the cello also rediscovers its friend the flugelhorn, and the dreams continue right up into the blue sky – where they can live on undisturbed.

Arcadia Lost is a kind of continuation of a short solo piece, Maze, which Jesper Koch wrote in 2016 for participants in the Carl Nielsen International Competition, held by Odense Symphony Orchestra. Koch decided, however, to incorporate Maze into the 2nd movement of the violin concerto, where the solo piece is expanded, and the orchestral movement created around it – and into it. A highly unusual composition process.

The concerto has three movements with the classical Italian indications: Barcarole, Notturno and Pastorale, which could have been titles of Romantic character pieces. The starting point for Arcadia Lost is also old – and Italian – namely Venice, as described in Percy Bysshe ­Shelley’s Romantic poem Julian and Maddalo from 1819. Shelley’s poems have been ­favourite reading for Jesper Koch ever since his teenage years, and the inspiration from Julian and Maddalo appears in fragments in the 1st movement of Arcadia Lost, which has Romantic longing and pent-up feelings as its theme.

In Julian and Maddalo, the two friends sail out to an isolated lunatic asylum to visit a man who was once a gifted, artistic individual. While the sun sets and the bells chime from a sinister tower without windows, they meet the madman, who has lapsed into insanity because of unrequited love. The same fall from the heights takes place in Arcadia Lost, where the violin gradually falls throughout the first movement through the orchestra, ending up on its lowest note and disappearing, because it cannot take part any longer. Meanwhile, the soloist is gradually drowned by the orchestra, like the sea that slowly rises in Venice and inundates the city.

The movement ends with a cor anglais theme that is taken over by the soloist in the 2nd movement. The violin continues with a slow, nocturnal cadenza before the orchestra comes in with a quick 12/16 capriccioso, full of shimmering ghostlike visions. This alternation takes place several times during the movement, which is a virtuoso composition and places great demands on the soloist.

If the 1st movement is evening music and the 2nd movement night music, one wakes up in the 3rd movement, Pastorale, to a new day. It is transparent, light music, orchestrated lightly in a graceful, neo-classical 9/8-time signature. The indication is semplice, and the introduction is provided by a piccolo flute, the Arcadian instrument of innocence. It is the guiding star of the movement that points the way to Arcadia, the utopian hope of happiness.

‘Nowadays we have to be happy all the time, and unhappiness must be reduced to an absolute minimum,’ Jesper Koch says. ‘In former times, people had a more realistic outlook on life. Happiness was something measured, the ideal state of an instant. My violin concerto is all about oases of happiness, dislocations of memory and nostalgia. Like music from a lost age.’

The clarinet concerto Lonesome (2010-13) was first performed in 2013 by the solo clarinetist John Kruse and Odense Symphony Orchestra, conducted by Alexander Lazarev. The orchestra­tion is for strings, harp and percussion. The clarinet soloist is thus the only wind player on stage – it has no ‘friends’, but no rivals either. The clarinet talks to itself and calls out into the surround­ing space – and sometimes gets an answer. But who from? The surroundings change, and connections tend to dissolve quickly because the clarinet has difficulty in ­merging with its surroundings.

Lonesome is kind of a ‘theme with variations’ in a single movement. It is not only the clarinet’s opening theme that is varied on but also loneliness itself: one meets resigned loneliness, hopeful loneliness, balanced loneliness – apart from the various brief meetings the clarinet makes with the community of instruments. Because the clarinet basically has to make do with its own company and actively seek to make contact, it plays almost non-stop throughout the work.

The clarinet begins completely on its own with a melancholy lament ‘dal niente’, out of nothing. It is met with only a hollow backing from bells, harp and vibraphone. A resonance of loneliness. Only after this is there a more communicative answer from the violas, the most plaintive instrument among the strings. A bell chime soon marks that ‘time is over’, after which the clarinet in the next section is given a more life-sustaining charge of energy. But this too suddenly stops – at the sound of the bell. In the following variations the clarinet plays a slow waltz with a single viola (later three solo violas) and this is followed by a quick dance with a violin as a partner. The most dramatic section of the concerto is in an interaction with the entire string section before the clarinet plays a cadenza, accompanied by a string quartet, harp and vibraphone.

The final variation is optimistic and jazzy, but it is only a short respite, and the bell of loneliness keeps on calling. In spite of this, the clarinet and the orchestra finally achieve a form of interconnectedness – perhaps even a moment of happiness?