The award-winning Nightingale String Quartet begins a new exploration of one of the great unsung quartet cycles of the last century, that of Vagn Holmboe (1909-1996). The Danish composer’s quartets are captivating, bold works composed with spirit, poise and craft that can truly stand comparison with the greatest cycles of the twentieth century. Their variegated textures, exploratory tonality and rhythmic verve are realized with skill and beauty on this striking first instalment. 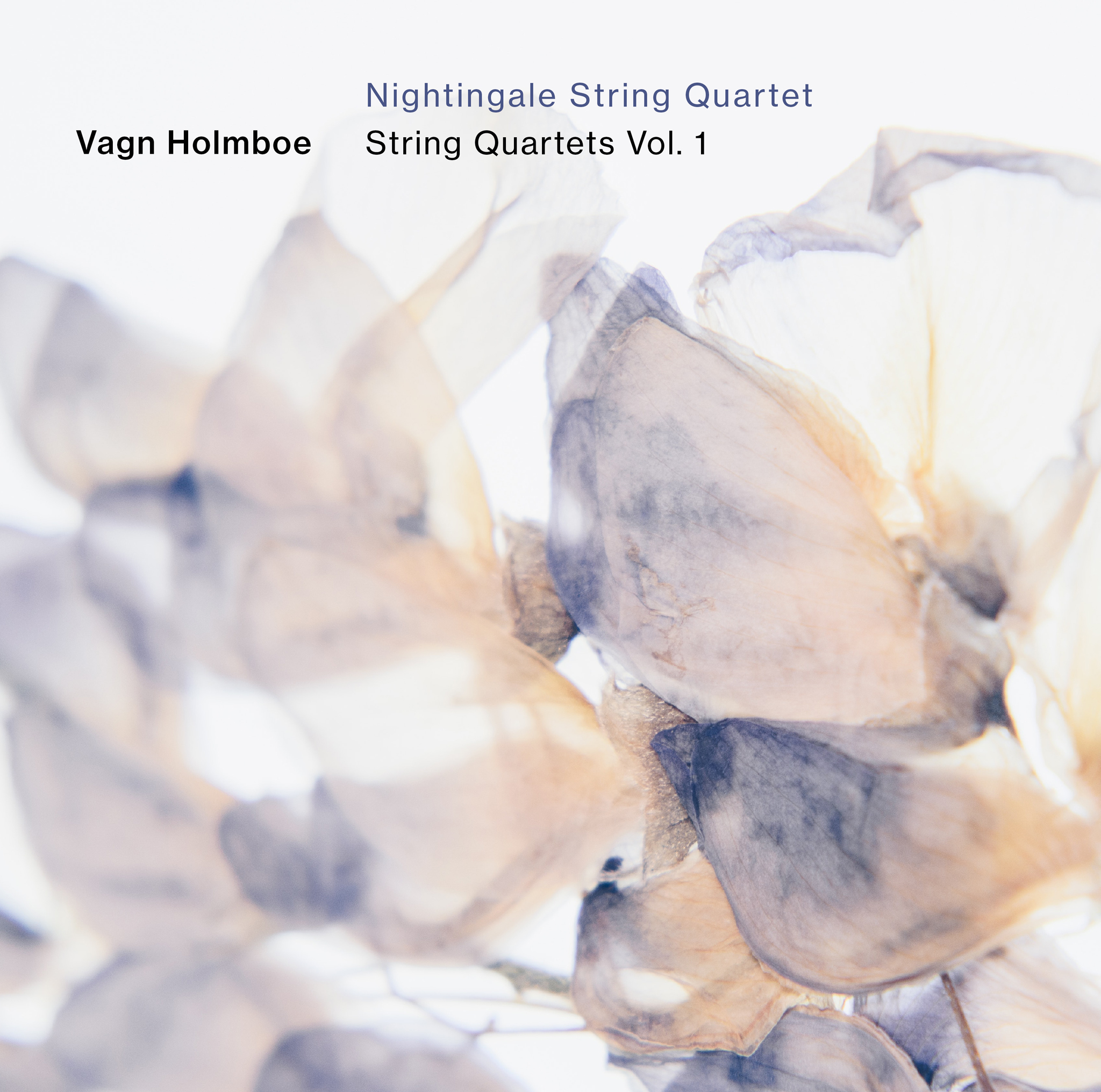 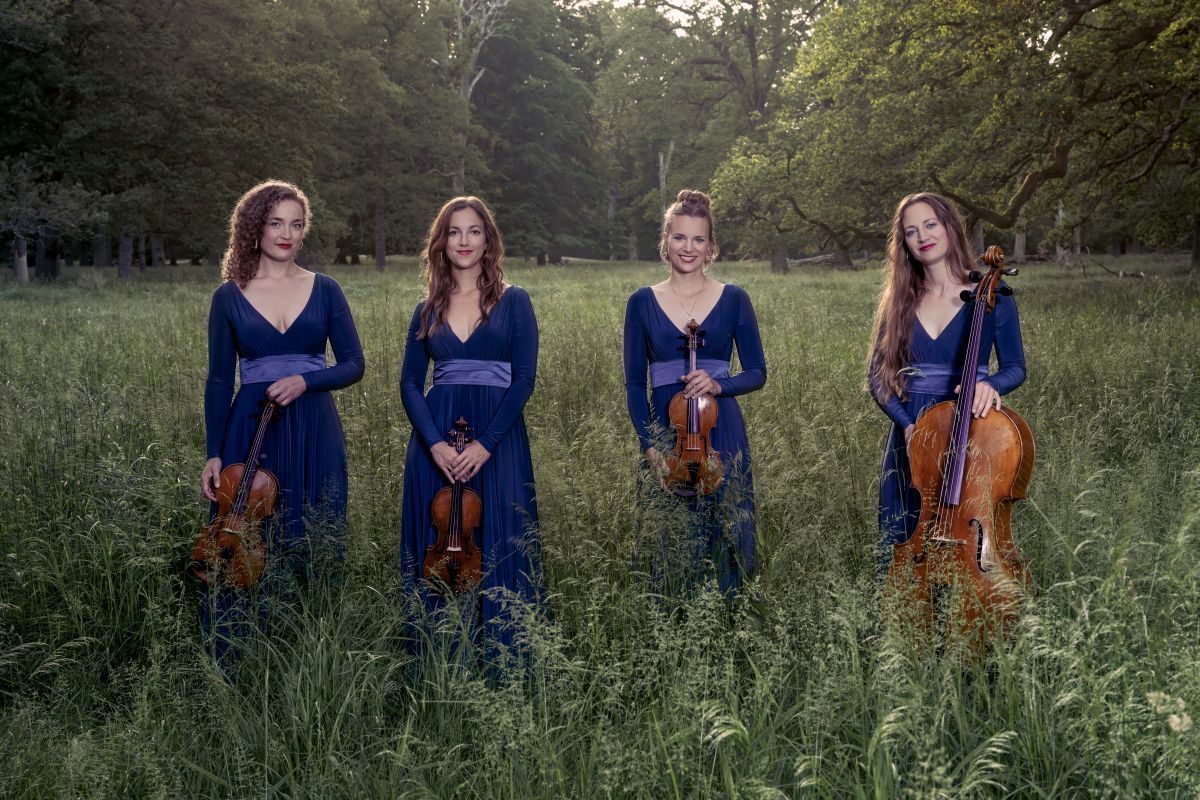 A life with quartets

Vagn Holmboe (1909-1996) composed string quartets already as a teenager, and even on his deathbed at the age of 86 he worked on one. No other genre preoccupied him to the same extent. In all, he wrote over 30 works for string quartet, 22 of which are included in his official catalogue of works. The volume surpasses that of Bartók and Shostakovich together, and, as regards quality, Holmboe’s quartets can stand comparison with the greatest.

In 1926, the 16-year-old Holmboe auditioned to study at the Royal Danish Academy of Music in Copenhagen. He brought along his violin and was examined by a short man who turned out to be Denmark’s national composer Carl Nielsen. Holmboe recalled it as follows: ‘He had grey hair and was very kind. He said: ‘We’d better go to room A and see what we’ve got here.’ He asked if I could play, so I played a part of a Händel sonata, and I played something by Sibelius. I had brought a quartet along; he now took it out. When he had perused it, he put his hand on it and said: ‘Well, you can regard yourself as admitted.’ And I was completely surprised and perfectly happy.’

Even though Holmboe did not get to study composition with Carl Nielsen, the academy was permeated by Nielsen’s core issues, especially the study of the classics and polyphony, and that influenced Holmboe’s music throughout his life. For the same reason, the classical composer Haydn became one of Holmboe’s lifelong role models. ‘He is absolutely precise and clear, which you have to be if you want to write quartets at all’, said Holmboe. Béla Bartók, who later became Vagn Holmboe’s second great role model, was still unknown to him at that time. On the other hand, Holmboe became acquainted with Bartók’s Eastern European roots on his own. In 1930, during a study trip to Berlin, he had met the Romanian pianist Meta Graf, whom he married in 1933. Together they undertook ethnomusicological field studies in Romania to research folk music and folk dancing.

Vagn Holmboe’s meeting with the exotic culture was overwhelming for him, having grown up in a traditional Danish city family as the son of a paint dealer. Holmboe often talked about how he was ‘liberated’ by folk music, its free rhythms and tonality. That ballast gave him a special status among his generation’s many neoclassically orientated composers in the ­Nordic ­countries.

Vagn Holmboe had already composed ten unpublished string quartets when, at the age of 40, he wrote a work with the definitive title String Quartet No. 1. There must have been good reasons for calling the new work No. 1, and Vagn Holmboe realised this himself – after having worked with the genre for over 20 years. ‘It is hardly wrong to say that my first string quartet marks a kind of turning point or a point of development. I was prepared for it, but suddenly it broke loose’, Holmboe recalled shortly before his death. ‘Personally, I had undergone a development that made writing another kind of music essential.’

In Holmboe’s notebook, String Quartet No. 1 was given the subtitle In memoriam Béla Bartók. The great Hungarian composer had died four years previously, and one can hear musical tributes in the form of Balkan rhythms and the Bartók-like arch form of the first movement. And in fact, Holmboe continues exactly where Bartók left off, namely by beginning his String Quartet No. 1 with a long viola solo, just as Bartók did in his final quartet, String Quartet No. 6.

After the viola solo, the cello joins in; then the violins make their entry in a very Bartókian way; in parallel seconds. The primo violin rounds off the introduction with an echo of the viola’s introduction, which lends symmetry to the section. Then begins the main section of the movement, shaped in classical sonata form and with many contrapuntal features, but with a Balkan-dancing basic pulse of quavers grouped 3+3+2. The second movement takes the form of a theme, built up of 3+2+3 quavers, and three imaginative variations in three-four time. Holmboe himself was mystified by what he had created here. ‘It opens with a tonal picture that also has a melodic aspect, but it doesn’t go anywhere’, he explained. ‘Suddenly, it is transformed into a series of variation-like movements that are very lively, but are covered, as it were, by a concealing lid. That movement is rather strange; I cannot analyse it myself; it is impossible for me.’

The final movement begins with augmented, hymn-like chords, before the main section rushes onwards, molto vivace, in five-four time. The liberated rhythms are emphasised by alternating accentuations in a restless and virtuosic rush, where Holmboe bubbles over with creative joy. Finally, all four musicians fall in line to reach the final goal, a pure C major chord – hitting the bull’s-eye, which demonstratively points out the certainty with which Holmboe has driven the music around in the three movements.

String Quartet No. 1 was dedicated to the Erling Bloch Quartet, who gave the first performance of it in Copenhagen on 31st January, 1950 and the following year made a recording of the work – the earliest recording of Holmboe’s music for string quartet. His String Quartet No. 1 was also presented at the ISCM Festival for New Music in Frankfurt in 1951.

Vagn Holmboe often worked in series, where a work immediately gave rise to a successor in the same genre. This was also the case with the string quartets, which over the years turned up in sets of two, three or four at a time. The String Quartets Nos. 1-3 were written within merely a year and a half. ‘It was unusual,’ Holmboe remembered. ‘A quartet that usually takes three months to write took just under a month. The speed has nothing to do with the quality or nature of the music; it is merely a question of a sudden tidal wave coming in.’

Also in String Quartet No. 3, the legacy of Bartók is found in the symmetrical form, in which five movements are centred around a slow middle movement, and from Holmboe’s idol Haydn, whose densely woven treatment of motifs is heard throughout, perhaps most clearly in the quick second movement. And, like String Quartet No. 1, this work begins with a drastic exposition of dissonant intervals that outline the piece. The two interval leaps, a major seventh and a minor ninth, form the framework of a great, tragic scene in Bartókian arch form and with rhythmical elements from the pompous French overture of the Baroque era.

Placed symmetrically around the middle movement stand two quick movements, and the second movement dances on its way in a high pitch. The movement leads attacca into the central third movement, a chaconne. It is built on a long theme that begins as a 12-tone row but develops into a tonal theme. The theme is presented quietly by the viola and then wanders around between the four voices before the movement ends on a simple C major chord – an elegant rejection of the 12-tone principle, which Holmboe never embraced.

The fourth movement follows the symmetry and is therefore a quick intermezzo, this time very burlesque. Here, too, one meets the seventh and ninth signals of the introduction. The quartet is rounded off by the short, introvert fifth movement, which, as an epilogue, reflects the first movement and ends with a veiled quotation from the beginning of the work.

String Quartet No. 3 was given its first performance by the Koppel Quartet on 1st March 1951 in Det Unge Tonekunstnerselskab (The Society of Young Composers). In 1953, the work was chosen to be played at the ISCM Festival in Oslo by a jury that consisted of Luigi Dallapiccola and Mátyás Seiber, among others.

Even though they span six years, Vagn Holmboe’s String Quartets Nos. 14, 15 and 16 make up a ‘set’ because they are connected by the same motif – a tiny figure that Holmboe ­apparently could not get out of his head before he had investigated all its possibilities. The figure, a short ‘seagull’s cry’, is heard for the first time as the introduction to String Quartet No. 14 (1975) and turns up again as the starting point for String Quartet No. 15 and is heard too in No. 16, ­written in 1981.

Holmboe rarely worked with melodies in the traditional sense. He explained: ‘What has interested me is not so much melodies as the melodic aspect, where opportunities are given to both strong expression and more pastoral or gentle threads. These motivic fragments prove ­flexible, that is, they can transform and change themselves as necessitated by the course of events.’

In the masterly and very concise String Quartet No. 15 the motif in the first movement is not just a melody, but a core with countless possibilities. The motif can be unfurled, change character and function, step into the foreground or the background, and so on. To counter the ‘seagull’s cry’, Holmboe places a running figure in semiquavers, which towards the end widens out in quavers. In that form, it becomes the starting point for the next movement, a short ­scherzo, which is played with mutes. At the peak of the movement, the quaver figure becomes an accentuation of the crotchets, before the movement falls to pieces.

The third movement – rather unexpectedly – is a slow funeral procession. It opens with lamentations in the primo violin and the cello before all four voices gather in a subdued little chorale and thereafter help one another to calm things down. The instruments remain muted in the fourth movement, which begins slowly with echoes of themes from the third movement. The entire work is thus interconnected from movement to movement. Thereafter the mutes are removed, and a quick finale tempo gets underway. In the movement’s coda, the ‘seagull’s cry’ returns for a final remark before the free tonal sequence lands on a many-coloured chord above the keynote C. An ambiguous ending that acts as an opening to even more new works.

Dacapo Records acknowledge, with gratitude, the support of MPO, Musikforlæggerne and Koda Kultur

This release has been made in cooperation with the Royal Danish Academy of Music, Copenhagen