John Storgårds, Christina Åstrand, Tampere Philharmonic Orchestra
While Danish Romantic violin concertos aren't exactly ten a penny, these three important examples of the genre firmly establish that the great Romantic violin concerto certainly had a place in Danish music: from Niels W. Gade's grand, finely orchestrated concerto from 1880 through P.E. Lange-Müller's concerto from 1902 with its many moving melodies to 1943-44 when Rued Langgaard combined old virtues with new currents in his brief pastiche of a violin concerto. These three rarely-performed works are presented on this release by one of Denmark's absolutely finest soloists, Christina Åstrand, here in good Finnish company with the Tampere Philharmonic and its chief conductor John Storgårds.
Buy album 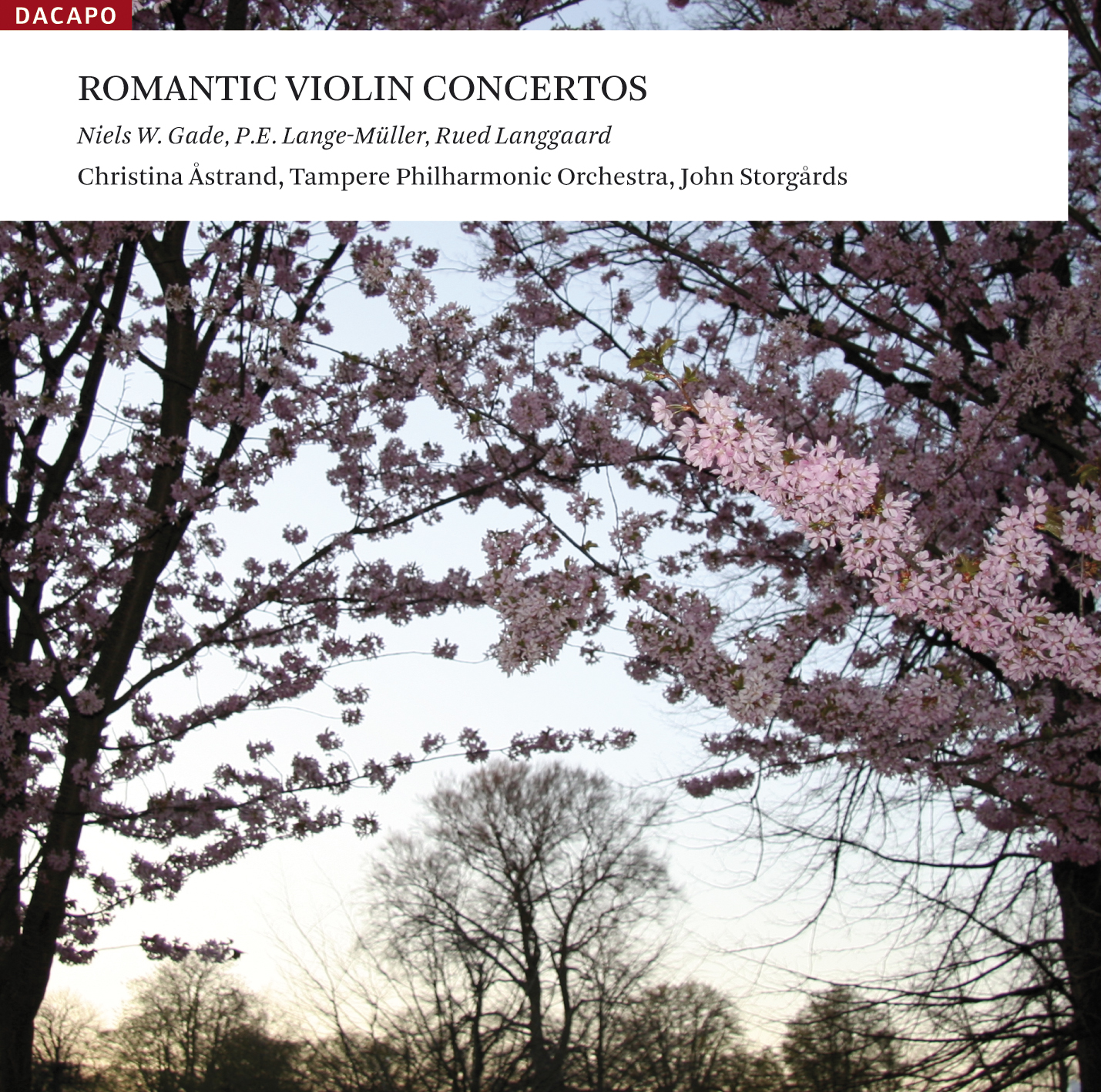 "All three concertos are beautifully executed by Christina Åstrand who shows off the upper register of her instrument with a lovely purity of both tone and intonation."
Peter Joelsen, Audiophile Audition
SELECT PREFERRED FORMAT TO DOWNLOAD SINGLE TRACKS.
Total runtime:
61 min.

Danish violin concertos from the Romantic period aren't exactly ten a penny. Although the genre was one of the favourites of the period, we had to wait for Emil Hartmann's (1876) and Niels W. Gade's (1880) if we wanted Romantic violin concertos on the grand scale by Danish composers. Gade got to grips with the concerto form late in life, and the only result was this single work. He was himself a violinist and had two of his three important violin sonatas behind him in the summer of 1880 when he composed his opus 56, the violin concerto in D minor. As early as October the same year the work had been fully orchestrated. In her biography of Gade (2002) Inger Sørensen says that he had sent the concerto as a Christmas present to the famous violin virtuoso Joseph Joachim, and that the latter had expressed his sympathy for the work in a letter to Gade. On 15th February 1881 the violin concerto was given its first performance at the Hoch-schule für Musik in Berlin with Joachim as soloist, and on 30th November the next year Gade himself conducted the first Danish performance, which was quite naturally given at the society Musikforeningen, where Gade was the concert conductor. The solo part was in this case played by Anton Svendsen, who was a member of the Royal Danish Orchestra and incidentally a pupil of Joachim. In Inger Sørensen's work we read that a couple of German violinists added Gade's violin concerto to their repertoire and in fact played it several times, but not many years passed before it had more or less slid into oblivion. In recent times it has been taken up on a few occasions but without gaining a permanent foothold in the standard repertoire. Nor have the Danish music histories taken kindly to the work: in his Dansk musiks historie (1969) Kai Aage Bruun calls the concerto the somewhat pale, although violinistically well wrought violin concerto from 1880, rather insipid music ...\\, and Nils Schiørring does not even mention it in his Musikkens Historie i Danmark (1977-1978). In his little biography of Gade, which appeared in 7, on the centenary of the composer's birth, William Behrend offers a characterization of the late works - including a quite different evaluation of the violin concerto: \\everywhere beauty reigns as the supreme law, nowhere does one sense a harsh idea or mode of expression, but often a captivatingly fine grace and a vital but never noisy gaiety. Sometimes, for a few moments, a subdued, dimmed light may descend on the orchestration, melodies are transposed into remoter (veiled) keys, or seem to flow from some elegiac emotion, like the lovely, grandly curving melody that opens the violin concerto. It is as if the wistfulness of age or memories of bygone times hold the mind of the older artist in their sway. But these moods, which can often be strangely endearing, do not last long, and set off against this background the fulsome, joyous tone that quickly prevails shines forth with double lustre.\\

Niels W. Gade's violin concerto is a true Romantic concerto with the permanent focus on the soloist. Gade stays within the traditional formal sequence, and in the texture of the movements he proves himself a true symphonist with great attention to the develop-mental and thereby the dynamic aspects. As can also be noted in several other late orches-tral works, over the years Gade developed well nigh supreme mastery of the instru-mentation, which along with the fine treatment of the themes gives the work an immediate appeal. It is as true of the violin concerto as of a whole series of concertos and symphonies by other composers that the apparent weaknesses are often to be found in the final movement. Comparing it with the great violin concertos of the period, we must indeed concede that the final movement of Gade's concerto lacks Men-dels-sohn's ethereal butterfly lightness or Brahms' gravity and rhythmic dynamism. But perhaps we should assess the concerto more as a whole on its own terms in this difficult genre. As such it has cohesion and expressive qualities that should grant it a more pro-mi-nent position in the concert repertoire than has hitherto been the case.

That Gade wrote a violin concerto can come as no surprise in itself: as mentioned above, it was a tradition in Romanticism to compose weighty violin concertos - we need only think of Mendelssohn's, Schumann's, Brahms', Bruch's, Tchaikovsky's etc., and Gade had great experience: as an orchestral composer he could look back on a series of successes. It is far more striking that P.E. Lange-Müller, at the height of his career, took on the concerto genre. Ever since his early first opus, the songs based on extracts from B.S. Ingemann's cycle of poems -Sulamith og Salomon (Solomon and the -Shula-mite), Lange-Müller had shown himself to be a born vocal composer. Although he wrote several collections of fine, sure-handed piano pieces, the ‘romances' and the music for the stage are the most important things Lange-Müller wrote. Of course this did not prevent him from trying his hand with the major instrumental genres - the piano trio from 1898 is for example one of the finest Danish chamber works of Late Roman-ticism - but his two symphonies, no. 1, Autumn (performed in 1882), and no. 2 (com-posed in 1889 and revised in 1915), have lived rather in the shadows and have only seen a few performances. It is first and foremost the absence of symphonic development that has barred the path of these works into the concert hall.

But the lack of success in this area did not discourage Lange-Müller, and on 18th April 1904 at Dansk Koncert-Forening he could present his new violin concerto in C major. On this occasion the composer himself wielded the baton, and as the soloist one could hear Axel Gade, Niels W. Gade's son, who like Anton Svendsen was a musician in the Royal Orchestra and a pupil of Joseph Joachim.

Lange-Müller's violin concerto was composed in 1902, and in connection with the work on it the composer consulted Axel Gade, who wrote a cadenza for the first performance of the concerto. The work opens with the grandly conceived first subject with its basic material expressed in the first four bars and repeated, sequenced and varied in what follows. The solo violin ‘falls in' in b. 8, where it takes over the melody line like an extra orchestral instrument. In the 60 bars covered by the first subject a culmination appears in b. 45. By this time the harmony has moved into B major, the dominant of the second subject's E minor. The 58-bar second subject section is dominated by the supple springdans-like theme. Accompanied by the long trills of the solo violin the movement enters the development section, which is introduced by a series of solo entries in the orchestra. A slightly stylized dance version of the first subject enters in the orchestra, while the soloist keeps up the second subject, but gradually the first subject makes itself more strongly felt up to the abbreviated recapitulation. The movement is furnished with an alternative ending (\\ad libitum\\), where, as mentioned before, there is a space to interpolate a cadenza. This brief account of the movement shows how schematically Lange-Müller has treated the sonata form. The bearing elements in the movement are more the subjects and the melodic elaboration than the structural development.

The second movement bears the marks of Grieg, not least in the short intermezzi in the orchestra. That is not surprising, for at the end of the nineteenth century inspira-tion from Norwegian music was very strong - it can be heard in Lange-Müller's younger colleagues Louis Glass and in Carl Nielsen. The final movement is energetic with several harmonically striking passages and - like the first movement - long melodic lines.

There have been a variety of opinions in the musical literature about this violin concerto. Kai Aage Bruun considered it \\a very pale affair\\ (1969), and Nils Schiørring thought that the concerto, like Lange-Müller's other orchestral works \\does not hold its own today\\ (1978). Against this background it is thought-provoking to read the account of the concerto in Julius Clausen's Lange-Müller biography, which appeared in 1938. Clausen begins by describing the Romance for Violin and Orchestra op. 63: \\Despite the widely differing form there are great resemblances between the two violin compo-si-tions. The main emphasis is on the lyrical. The ‘Romance' has its own dreamy sweet-ness, but is free of any hint of sentimentality. The Violin Concerto is no less rich in melody, but is perhaps more a violin fantasia than a true concerto; in a way it was a misunderstanding when [Axel] Gade, out of consideration for tradition, constructed a cadenza for the first movement. It did not belong there, just as the Concerto is by no means a virtuoso piece with brilliant effects. Could this be the reason why this beautiful piece of music, with its noble melodies, and a certain fieriness in the final movement, never appears on the repertoire of our violinists? Yet we have no surfeit of Danish violin concertos.\\

There are some indications that for many of the early years it was customary to insert a solo cadenza in the violin concerto, for in The Royal Library, besides Axel Gade's, there are another two cadenzas by Tor Aulin and Julius Ruthström. On this CD the work is played without a cadenza.

Like his two predecessors Gade and Lange-Müller, Rued Langgaard composed only one violin concerto, and like their concertos, Langgaard's too has led a quiet life. The work was begun in July 1943 and was finished on 3rd February 1944. It was not played during the composer's lifetime, but had to wait until as late as 1968 for its first per-for-mance on Danmarks Radio in a studio production with Kai Laursen as soloist and the Odense Municipal Orchestra conducted by Aksel Wellejus. This performance has later been incorporated in the Danacord label's CD box of 26 Danish violin concertos played by Laursen. Although the work bears the title Concerto (in one movement), it hardly meets most listeners' expectations of a violin concerto. For one thing the work is very short - it lasts just under ten minutes - for another the violin is not at the absolute centre of the concerto, since it is accompanied by a concertante piano which like the violin forms part of the almost chamber-music-like structure. The concerto has a decidedly pastiche-like character where High Romantic elements are mixed with newer stylistic features.

The three concertos show how the great Romantic violin concerto also found a (late) expression in Danish music. Gade's concerto was written for the great contempo-rary violinist Joseph Joachim, and as such can indeed be placed in the great central European concert tradition. Lange-Müller's can be regarded as a further development of this concerto type, such that it can be fitted into the universe of the romanze composer. Rued Langgaard's little concerto is a personal, perhaps wistful look back at a bygone tradition.