Christina Bjørkøe
If I hadn't written music or done something like it, I would surely have ended up in a lunatic asylum\, (1919-2000) once said in an interview. During his long composing career, he managed to create more than 650 works, more than a quarter of which were written for piano solo. This recording features Dacapo's 2005 Danish Music Award winning pianist who ventures into three remarkable Bentzon sonatas from the 50s with amazing results.\\\
Buy album 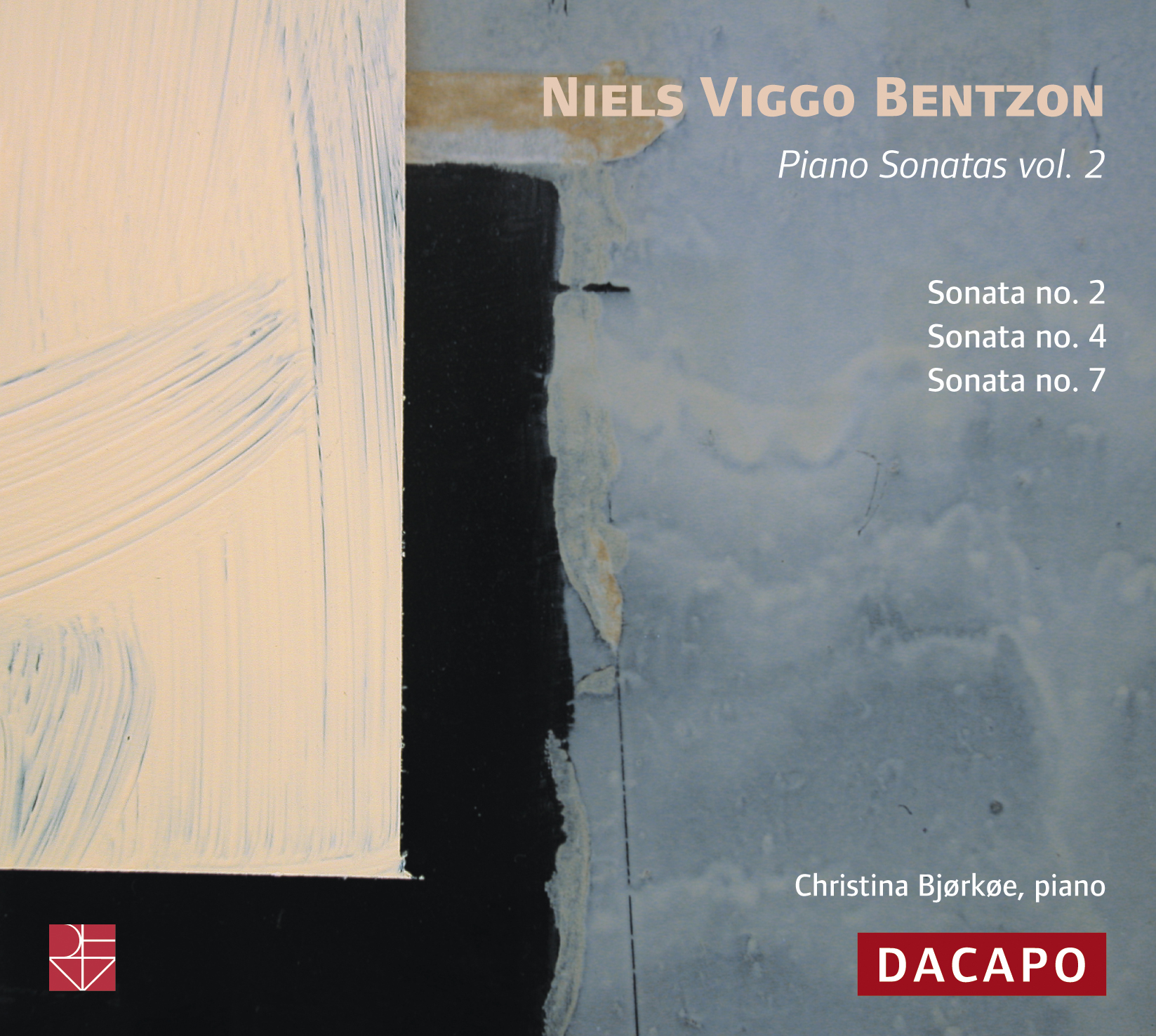 Niels Viggo Bentzon once said in an interview: If I hadn't written music or done something like it, I would surely have ended up in a lunatic asylum.\\ In the course of a long life (1919-2000) Bentzon composed more than 650 works. He thus succeeded not only in warding off the frightening prospect of being locked up, but also in influencing Danish and interna-tional music to an enormous extent and in the greatest possible number of ways: through his own music and that of others as a concert pianist, as the author of books, articles and essays, and as a conservatory teacher, com-men-tator and provocateur. Bentzon's engagement in contemporary society and art was intense and uninterrupted. For that reason alone it is remarkable that his music for the most part displays a dis-tinct personality and individual stamp independent of current fashion. It is admit-tedly more ex-pres-sive than average in the 1940s, fairly dodecaphonic towards the end of the 1950s, and from the beginning of the 1960s occasionally garnished with the ‘happenings' of the Fluxus movement, but he never abandons his own characteristic idiom.

In 1988 Bentzon told Bertel Krarup that he was \\very sensitive to trends, though of course a leo-pard doesn't change his spots.\\The fact that his style re-mained pretty much constant over the years may have had something to do with his non-cerebral, improvisatory method of working.\\All I can do,\\ he told Krarup, \\is put my hands on the piano keyboard in a way I instinc-tive-ly feel is right - and it usually works. Then my hands move around a bit. They really do the job, though needless to say my brain is involved as well.\\ In other words, the music is a joint product of the performer and the compo-ser, where the success of the latter depends on the ability to proceed mean-ing--fully from A to B and from B to C. Writing music is about solving the problem formulated in the very first tone of a work.

The piano was thus Bentzon's tool as a composer, and as an instru-ment it occupied a central place in his output. More than a quarter of the entire opus-list highlights the piano, including some thirty piano sonatas writ-ten in the course of his whole life. Most earlier recordings (and countless per-for-mances) also featured Bentzon as his own interpreter.

Bentzon wrote his Second Piano Sonata (1946) in direct continuation - almost as a slightly broader echo - of the better-known Partita from 1944, which was performed at the 1947 ISCM Festival in Copenhagen. This ex-posure at what was then probably the most prestigious of contemporary music festivals led to something of an international breakthrough for Bent-zon. That may seem paradoxical in the light of what we think of now-adays as the trademarks of postwar modern music, for neither in the Partita nor in the early sonatas do we find systemic experiments, ad hoc minimalism or acoustic hypercom-plexity, but on the contrary a reinstatement of the big virtuoso gestures of nineteenth-century piano music - \\furioso passage-work and thick block chords,\\ to use the composer's own words. A closer look at the individual movements of the sonata makes the point clearer. The macrostructure of the piece conforms to the three-movement pattern of classical music - fast, slow, fast - with a thematically inbuilt home-out-home or quasi-sonata form in the respective movements.

This is already seen in the first move-ment, marked Tempo allegro. There is a singable, rocking, principal theme in the conventional sense of that term; a contrasting subsidiary theme based on a single tone and its repetitions; a passage in free variation, with slow versions in various transpositions of the material already presented; and the movement comes to an end with a kind of re-prise of the first theme and a short coda. So the modernity of the music lies not in its form but in the content it unfolds. For example, there is little point in talking about keys here. Instead the piano is used in the first movement - almost like Prokofiev - as the percussion instrument that it really is, in an extended sequence of hammering chords with free shifts of tonal level and with dancing, jazzy rhythms.

In the second movement traditional form again en-frames innova-tive content. After and before a slow, wordless song (per-haps a cho-rale?), a stylistically quite unusual middle section unfolds. There is a faintly audible theme, buried in slow tempo in the lowest register of the in-strument, but the dominant impact is that of trills at the top of the keyboard and virtuoso runs in the shape of pure ornamentation - effects, if you like - of the absent melody. Here we have a harmonically free sound-composition in impres-sionistic style where the ornaments circumscribe something that is not actu-ally there.

The virtuoso ornamentation returns in the third movement. A whirling bass is supplemented by a single, insistent tone with a melodic twirl as the thematic contribution of the right hand. Apart from a freer passage in slower tempo the move-ment manifests itself as one long, wild flow of counter-point, where the handful of tones in the theme are tossed up and down the keyboard and so subjected to all kinds of transformations.

The leap from the Second to the Fourth Sonata is a big one. Compared with the classicistic exercises of no. 2, there are only a few traces remaining of rigid, formal schemes in no. 4 (1949). Bentzon himself called this work in six movements a kind of double sonata, in which the three largo movements (1, 3 and 6) are interrelated while the remaining movements can be thought of as indepen-dent compositions on a small scale. Here, as in the Baroque era, the term sonata means little more than a collection of movements that (to quote a music handbook from 1703) \\is for all kinds of instruments what the cantata is for the voice, and constructed as the composer thinks fit\\ - in other words liberated from the restrictions of dance, text or the rules of counterpoint.

The common denominator linking the three largo movements is an atmosphere described by the composer as \\a Gothic striving for Heaven.\\ What he probably had in mind here was the chains of chords, unbroken for quite long stretches and proceeding in measured rhythm, though in no particular or at least obvious direction. The second and fifth Allegro move-ments are opposites to these three. As with Hindemith, for example, the music here consists of sequences of polytonal, atonal or modal figures constituting well-nigh ‘automa-tic' sequences within demarcated sections. Or it consists of piled-up chords (often with a note for each finger in both hands) that are neither major nor minor, or are both at the same time, thereby imparting a foreign or impersonal feel to the music.

The fourth movement goes its own way entirely. Actually it most resembles a jazz ballad with ornamentation of a singable tune. Here we seem most of all to be listening to the jazz pianist Bentzon improvising introvertly on a home-made jazz ‘standard'. The style is perfectly authentic jazz, a kind of early bebop with constant runs and ‘blue' grace-notes in the manner of mainstream jazz impro-visation. The unanswerable question that seemingly hovers in the back-ground all the time is whether this is atonal, note-against-note com-position with its roots in the Renaissance, or (merely) a simple, ornamen-ted solo melody accompanied by a walking bass. The obvious answer, taking Bentzon's own times and biography into account, is that it is both.

Ten years and 64 opus numbers later Bentzon's stylistic pluralism comes into full view. The Seventh Sonata (1959) is no longer a compilation of movements in specific temperaments, but is from beginning to end a synthesis of stylistic features from genres that musical theorists usually make a virtue out of pigeon-holing under specific names. There are ele-ments from a hazy dodecaphonic world, from the syncopated complica-tions of jazz, from the energetic and hyper-virtuoso outbursts of the nineteenth century, and so forth. And the striking thing is that all of this is held together in an unmistakably Bentzonian idiom, swinging back and forth between dynamic extremes without individual passages or techniques being permitted to dominate.

This sonata is neo in several respects (and in that sense in line with much Central European music of its time, e.g. Hindemith's). An oblique perspective on it can be -obtained by considering another of Bent-zon's auto-biographical state-ments: \\All I know for certain is that we have to go all the way down to 1960 before I become nervous about not being modern enough.\\ These words might admittedly be taken to mean more than one thing, but in the current context they are a very precise indication that Bentzon the composer, until the great paradigm shift took place in Danish music around 1960, remained fairly unperturbed by trends in the world around him.

In any case the Seventh Sonata, however many its sources of inspira-tion, re-tains the character of a unified musical entity. For this reason there is not much point in discussing, or listening to, the movements one by one. Irrespective of whether a movement is marked Allegro or Andante, they all display such great fluctuations of tempo, tem-pe-rament and dynamics - often exchanging thematic elements as well - that the piece can quite justifiably be viewed as a continuum, traversing within its total duration a single, meaningful path, though with all kinds of diffe-rent musical stopovers along the way.