Spyros Maurikis, Aarhus Symphony Orchestra, Bo Holten
Erik Bach (b. 1946) is a composer with the whole of music history in his backbone. With inspiration from the Postmodernism of the seventies he has composed over 70 works – many in an easily accessible and highly tasteful style. The three orchestral works on this CD make up a characteristic representative of Erik Bach's compositional style. Each of the works relies fully on the quotation of well known classical pieces that are intertwined with the composers own original ideas.
Buy album 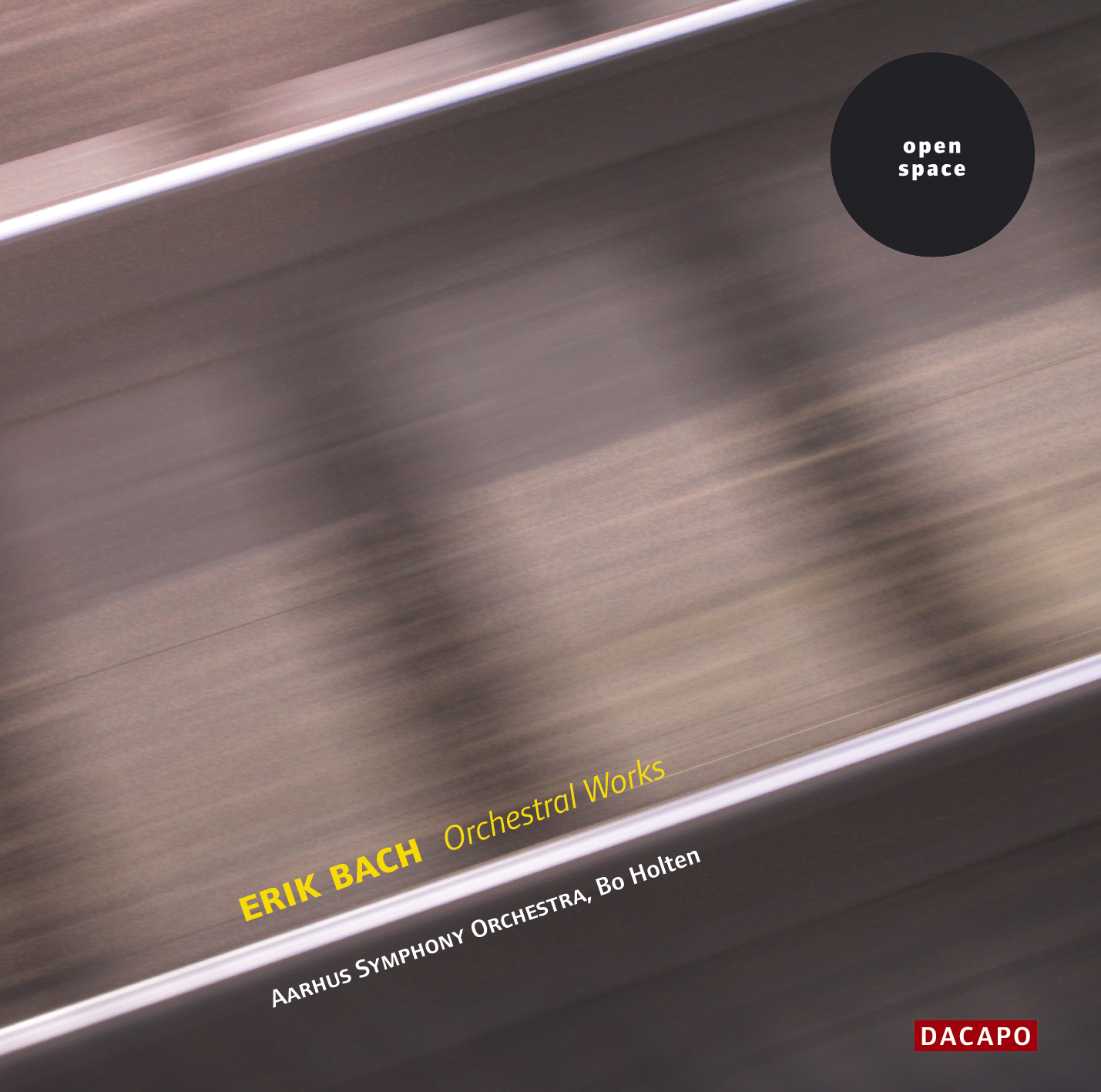 Erik Bach (born in 6) has composed 70 works - many in an easily accessible and highly tasteful style. He trained at the Royal Danish Academy of Music in music theory/music history as well as composition, taking his diploma in 1976. He is also a graduate in musicology from Aarhus University. A few years ago, too, he took the new degree course in music technology at Aalborg University.

Much of his working life has been spent on administration and teaching: he was principal of the North Jutland Academy of Music in Aalborg from 1978 until 1992, principal of the Royal Danish Academy of Music in Århus from 1992 until 2001 and then a lecturer at the Academy in Århus. In 2004 he was appointed Director of the Danish Institute for Science and Art in Rome. Alongside this he has held a long succession of administrative posts, for example in the European Association of Conservatories, the Nordic Council of Conservatories and the Danish Music Council.

Réflexions for clarinet and orchestra comes from 1973-74. As a student at Aarhus University Erik Bach was working on a student thesis about Chopin's preludes for piano. He analysed the 24 pieces, as usual dividing the short pieces up into even shorter sequences, and suddenly the idea arose of putting the parts together in a new and different way\, as he put it.

The actual idea was as old as music itself. European composers have always drawn on their predecessors. But in the mid-sixties this became a whole epoch, a movement, a philosophy. Its great breakthrough came with the third movement of Luciano Berio's famous Sinfonia from 1968 - based on quotations from Gustav Mahler's Second Symphony and about fifty other works. Postmodernism was a reality.

At this time, the beginning of the seventies, \\music on music\\ was thus still among the new currents. And, then as now, it appealed much more to Erik Bach than modernism with its numbers and rows. We have hardly any modernist works from Erik Bach; nor in fact are there many examples of the flagship current of Danish -music from the period - the New Simplicity. He is much more the unifying type, both as a human being and as an artist; a man with the whole of music history in his backbone.

The beginning of the work is both very beautiful and very characteristic of the music of the seventies: after a slow quotation of Chopin things are set in motion: the orchestra opens up from a romantic minor to a modern world of light, the first motifs of the clarinet falling like shooting stars. But it all remains in a state of -mellow melancholy; a little as if the clock is stopped one afternoon at the end of the summer - with the high sky, the thin air, the cool sunshine. Such was the sound of Danish idyll in 1973.

And yet it is almost always Chopin one hears: sometimes in the form of immediately recognizable melodies taken directly from the piano music; other times as the harmonies alone, or as traces of a rhythm; or with quotations from different pieces on top of one another.

\\Whether the new work has the necessary logic and cohesion must be up to the listener to decide,\\ Bach wrote after the work. Any listener would say yes. The work certainly has logic and cohesion. But rarely cohesion in -Chopin's own sense. In that respect Bach seems more to be inspired by the Late Romantics. For example there are lots of Bruckner in the recapitulation-like ending - in the long echo of the melancholy of the beginning. At the age of 27 the composer had created not just a collage, but also his first symphonic poem.

Berlin Revisited was composed in 2002, that is almost thirty years later. The inspiration came from a visit to the old capital of the new Germany.

\\Seeing it again was intense and overwhelming!\\ wrote the composer afterwards. And one understands him: few cities have undergone greater changes in a shorter time - from the ravages of the war through dramatic division to reunifi-cation, with new subcultures and a boom in skyscrapers. True, the city itself has always been the stronghold of the avant-garde. But as a meeting-place for human beings it seems newer than ever.

All the same, the work is not programmatic. Bach has conceived it as \\an inner experience of a metropolis painted in music\\, he writes. \\The old Berlin forced its way up invisibly through all the modern facades and reminded me of the first performance of Alban Berg's Wozzeck in 1925 and of Richard Strauss, who lived there for many years. Brecht and Weill were there with the Dreigroschenoper and Mahagonny. And then there were the famous cabarets and Marlene Dietrich!\\

There is room for all of this. The work opens with a mighty bang, then a pulsating everyday mood. But the impressions of history quickly throng in. After just a minute's time one hears optimistic turn-of-the-century echoes - they may be from Richard Strauss' symphonic poems, from Alban Berg's expressionism, from hits like \\Mack the Knife\\.

Very many of the quotations can be recognized immediately; if an oboe plays a couple of notes at a particular pitch one thinks right away of Ein Heldenleben. But equally often they are contradicted or drowned out by quotations of a more inde-terminate origin, as a rule with a surprising effect: for example what is French Impressionism doing in the middle of all this? And doesn't that beautiful fanfare come from Danish Romanticism?

The answers are simple enough: everything has associations with Germany and its capital. One only has to find out how. Berlin Revisited can be experienced in many thought-provoking ways - but perhaps best of all through the city as a state of mind.

Astrotrain is much more specific. The work was premiered in 1988 at one of the North Jutland Young Composers' first events and is still one of Erik Bach's most Neoclassical and easily accessible works.

At that time Bach's children were playing with some popular construction toys called Transformers. You got a particular figure in your hands and twisted the components a little and in the end you sat there with a different figure. An old-fashioned steam locomotive could for example turn into a modern spaceship - thus the title Astrotrain. Bach now got the idea for a work based on the same principle: a work where \\a well defined musical statement is transformed into another with its background in the same elements,\\ as he wrote.

The technique is thus what the experts call ‘motivic metamorphosis'. It has a long and glorious past. And exactly like postmodernism's \\music on music\\ it was given a new lease of life in the twentieth century.

On Danish soil Vagn Holmboe compared it to\\the progress of the grub through cocoon to fully fledged insect\\ - the individual was the same, but transformed beyond recognition. Translated into music, one motif is gradually wrought into another motif such that the common core of the motifs is gradually reduced to a pure feeling or perhaps wholly disappears.

In this piece, though, Bach works with two motifs: first the very strong and rather mechanical motif of the beginning; later a calmer and fainter melody in the woodwinds. Now the melodies are sent on a trip around to the groups of the orchestra and then gathered in the large middle section of the work - \\the contrasts are softened up,\\ writes Bach. It is not least in this section that one senses Neoclassicist models like Igor Stravinsky and the Dane Herman D. Koppel.

But in the end the truth comes to light. The two melodies have despite everything developed in different directions. Only one melody can remain. Will it be the train or the spaceship?