Hans Abrahamsen (b. 1952) studied with Per Nørgård, Pelle Gudmundsen-Holmgreen and György Ligeti. His early works reflect the New Simplicity\ that dominated Danish music from the middle of the 1960s. In the 1970s the poetic qualities that can emerge from concretist stuctures became increasingly important to Hans Abrahamsen, as reflected by the Berlin Philharmonic in 1982. His most recent major work is the Concerto for Piano and Orchestra from 2000, which strikes out on new paths. 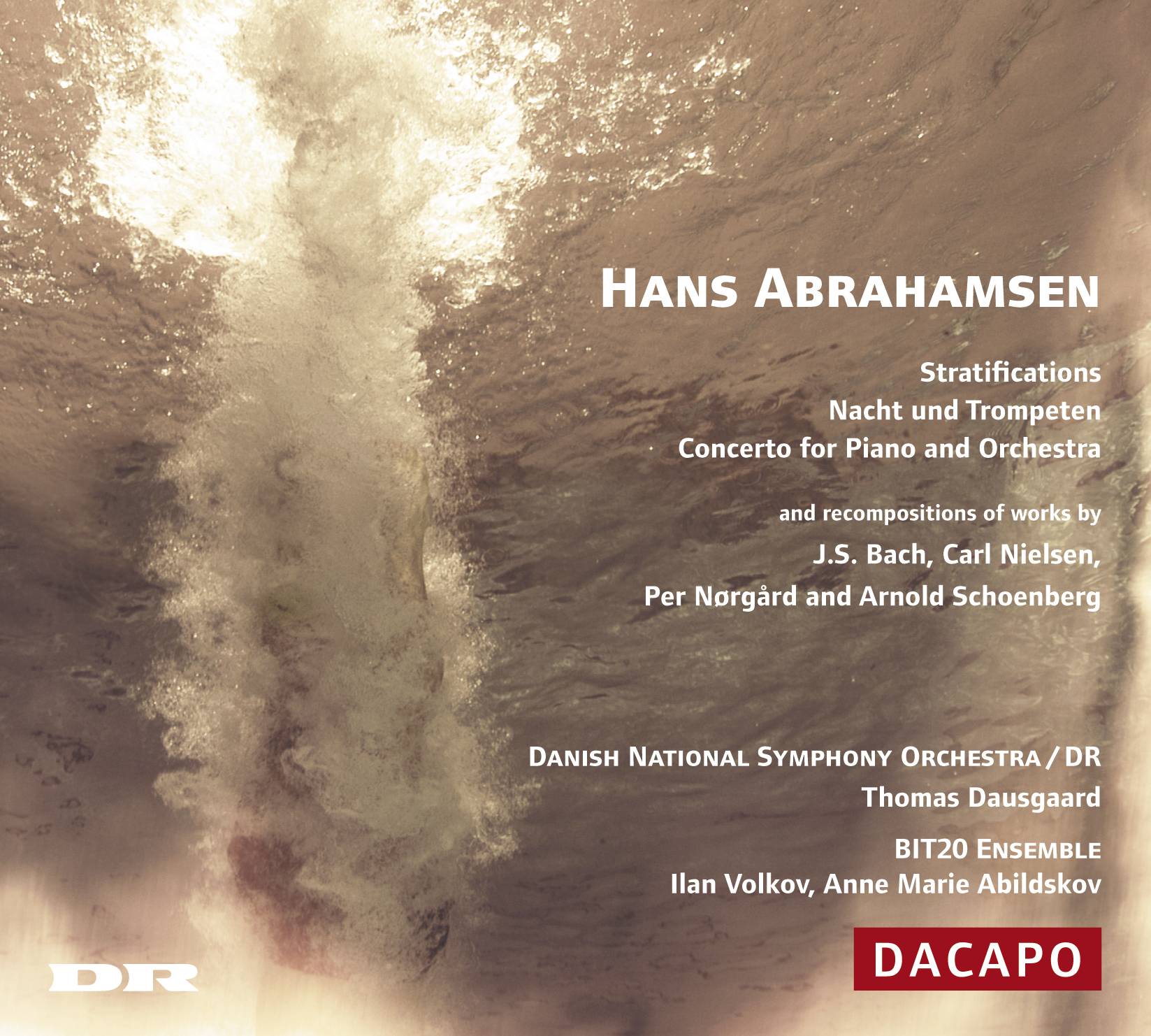 As a composer Hans Abrahamsen took his point of departure in what in Danish music history is called the New Simplicity. This anti-modernist movement demanded objective, immediately transparent musical structures and openness in the material, and the dominance of such structures can already be experienced in the young Hans Abrahamsen's first orchestral piece Skum (‘Foam') from 1970, written when the composer was just 18 years old.

The New Simplicity dominates all of Hans Abrahamsen's early period, which lasts up to and includes the orchestral piece Stratifications from 1973/75. In its structure and idea the first part of the work can be compared to a series of short film shots each lasting a minute. Each shot - there are four in all - has so to speak been filmed in a new place, but each time with a static camera that simply registers what is happening in front of the lens for the brief moment the shot lasts, without any movement of the camera or any focus on a particular actor or event. The stratified nature of the music to which the title refers thus applies both to the vertical (the film shots) and to the horizontal axis, since the composer has chosen to let several different independent musical strata, clearly distinguishable for the listener - different actions, so to speak - pass the camera lens at the same time.

The work begins in a "very cool" way, Hans Abrahamsen himself has said. The listener as it were looks on as the music plays. Or while the film shots are shown. One is situated outside the narrative. In the second part, however, the intensity of the music takes over, and the listener is sucked into a process. The tight structure of the first part is ruptured, and the music moves towards a high culmination. Hans Abrahamsen has described this development with light as his metaphor: the music is compacted into a laser beam. It is in a sense transformed into pure energy.

In the latter half of the 1970s, after the clear, cool concretism of the early works, Hans Abrahamsen began to be more preoccupied with the poetic qualities that the concretist structures can cause to emerge. Viewed in retrospect, the prelude to these qualities can already be experienced in Stratifications, but it was only in the subsequent works that they were brought sharply into focus. Hans Abrahamsen did not reject the structures, but he speaks himself of experiencing a new kind of listening to the material. In his list of works the change can be seen directly in a series of new, German titles. Roman-tic musical clichés like fanfares, horn fifths and simple melodies now appear as items from a familiar stock of material, but presented in a new light - for example in the orchestral work Nacht und Trompeten, commissioned by the Berlin Philharmonic and dedicated to the German composer Hans Werner Henze, who conducted the first performance of the work in 1982.

In Nacht und Trompeten Hans Abrahamsen harks back to material from one of his own earlier works, the chamber music piece Winternacht from 1976-78. But the great spectres of the twentieth century also haunt the threefold structure of the music. Schoen-berg's romantically--based expressionism is juxtaposed with Stra-vinsky's Neoclassicism and mechanicism, to use a slightly grand historical gesture. In other words the listener experiences polystylistic music.

The first part of Nacht und Trompeten - the first phrase, as the composer himself calls it - unfolds as slow night music with nostalgic echoes of music of the past. We hear horn calls, trumpet signals, rudiments of sicilianos in the strings. This rubato-like music is in some strange way outside time and reality. It belongs to the night. Perhaps to dreams. The irrational night music is followed by objective, minimalist music: a kind of mechanical antiphon to the night music. This part - or this phrase - takes place in a mechanical, rational time and culminates with triumphant trumpet fanfares. In this minimalist music the features of Stravinsky are discernible. The coda or final phrase, in the form of an adagio section, is influenced by Schoenberg's (and above all Gustav Mahler's!) Late Romantic world.

Hans Abrahamsen's piano concerto marks a new chapter in the composer's output. It was written in 1999-2000 and dedicated to the composer's wife, the pianist Anne Marie Abildskov, who gave the concerto its first per-formance with the Norwegian BIT20 Ensemble at the Ultima festival in Oslo in 2000.

The piano concerto begins with a flightily nervous, almost filigree-like and decidedly stratified music which points back in time to Abrahamsen's earlier ‘romantic' works. But after a very short time - less than a minute - this music petrifies or perhaps rather ‘settles' and then the concerto develops new aspects of Hans Abrahamsen's universe. The second movement begins ‘innocently and simply', as the score states, with a long solo for the pianist, before the flashing firework display of a scherzo in the third movement draws the curtain aside for a flowing, almost liberated final movement which with a discreet echo effect in the solo part gives the pianist the last word.

The piano soloist is throughout the undisputed heroine of the concerto. She plays almost all the time in the first three movements. In the second movement the music becomes almost operatic, the composer has explained. It is as if it is about to fall right over into the abyss of the shattering general pause to which the second movement, the key movement of the work, builds up. It is only in the fourth movement that the soloist takes a break and listens. Here, her brief introductory figure is the cue for a calmly flowing passage in the orchestra with a lullaby-like tone. Twice the orchestra threatens more violent eruptions, but both times the soloist calms things down with a simple lullaby.

It is characteristic of Hans Abrahamsen's music that one can dig layer upon layer of earlier pieces out from under the surface of a given work. The music so to speak works on with itself from work to work. One could also say that the music - and in the final analysis that means the composer - is in an ongoing dialogue with itself or himself. This can be heard in Nacht und Trompeten, and the same goes for the piano concerto. But besides references to earlier Abrahamsen works the concert also exhibits several striking examples of how Hans Abrahamsen, via his works, is in constant dialogue with other composers. This is not expressed by direct quotations; it is rather a matter of other composers' music leaving its fingerprints, as Hans Abrahamsen notes and acknowledges with loving references to the earlier masters.

It can be heard for example in the central second movement of the piano concerto when the trumpet, in the build-up towards the heart-stopping pause, repeats the note C sharp, fanfare-like and fortissimo, emerging from the material in a way that reminds the listener of Mahler's Fifth. This is not something that the composer has calculated; rather something he discovers and that is meaningful at the point in question. In the very last bars of the horn part in the third movement there is a similar (and very beautiful) tribute to the Hungarian composer György Ligeti and his use of the natural horn technique in his Horn Trio, which incidentally inspired Hans Abrahamsen to write his own trio for horn, violin and piano. György Ligeti, along with two of the most prominent Danish composers of the older generation, Per Nørgård and Pelle Gudmundsen-Holmgreen, were Hans Abrahamsen's teachers.

Bach's Befiehl du deine Wege is a chorale setting (BWV 272) that Hans Abrahamsen has arranged for fifteen instruments. In Hans Abra-hamsen's adaptation Bach's chorale gradually emerges from two melodic fragments, both borrowed from the Danish composer Poul -Ruders' Four Dances in One Movement. In fact both fragments are taken from the last three bars of Ruders' composition. One of Ruders' small melodies is descending, the other is ascending. The metamorphosis from Ruders to Bach can be accomplished because both of Ruders' melodic fragments are in fact ‘hidden' among the parts of this Bach chorale - inasmuch as the composer has transposed it into B minor. In the first verse we hear only the descending Ruders melody. In the second verse Ruders' second, ascending and chromatically coloured melody is added. In the subsequent verses more and more melodies are added. Thus the piece begins with Poul Ruders' melodic fragment in the foreground. In the course of the next verse Ruders' material gradually recedes into the background, and permits Bach's face to emerge with increasing clarity in the foreground. The piece is dedicated to Poul Ruders.

Hans Abrahamsen adapted Carl Nielsen's three late piano pieces op. 59 in 1990, that is on the 125th anniversary of Nielsen's birth, as homage to Carl Nielsen. In Carl Nielsen's version these pieces are almost polystylistic. They range from impressionistic cascades through unresolved modernist dissonances to blissful triads and simple, folk-music-like melody forms. Along with the Sixth Symphony they are thus among the most modern things Carl Nielsen composed. With his rewriting for ten instruments Hans Abrahamsen explores Carl Nielsen's music with the aid of a small chamber orchestra of soloists of the type characteristic of modernist composers like Schoenberg, who was active at the same time as Carl Nielsen. "For me reworkings like these are a dialogue through which I find myself in aspects of another composer's music - in this case Carl Nielsen's," explains Hans Abrahamsen.

The four pieces from Schoenberg's Sechs kleine Klavierstücke op. 19 are yet another example of the way Hans Abrahamsen engages in an exploratory dialogue with the music of other composers. The four pieces - all the slow movements from op. 19 - are arranged for a mixed chamber orchestra of soloists, of the type Schoenberg might have composed for. Thus they explore not only the tonality of the expressionistic piano pieces, but also the structure of the music of a composer who was extremely conscious of both these aspects.

Schoenberg's expressionistic piano pieces, the sixth and last of which was written in memory of Gustav Mahler, who died in 1911, have in Abrahamsen's hands not only been made sensual but actually have a kind of floating physicality; a paradoxical and fascinating expressiveness which according to the score is to be achieved by playing the pieces as slowly as possible - slower than they could be realized on the piano, in fact more or less in slow motion. The reworking of the Schoenberg pieces is dedicated to the Schoenberg Ensemble and the conductor Reinbert de Leeuw.