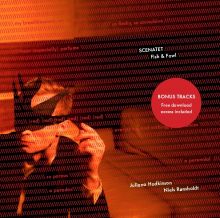 Ursula Andkjær Olsen has a MA. in musicology and philosophy from Copenhagen University and has attended the Danish academy of authors 1997-99.