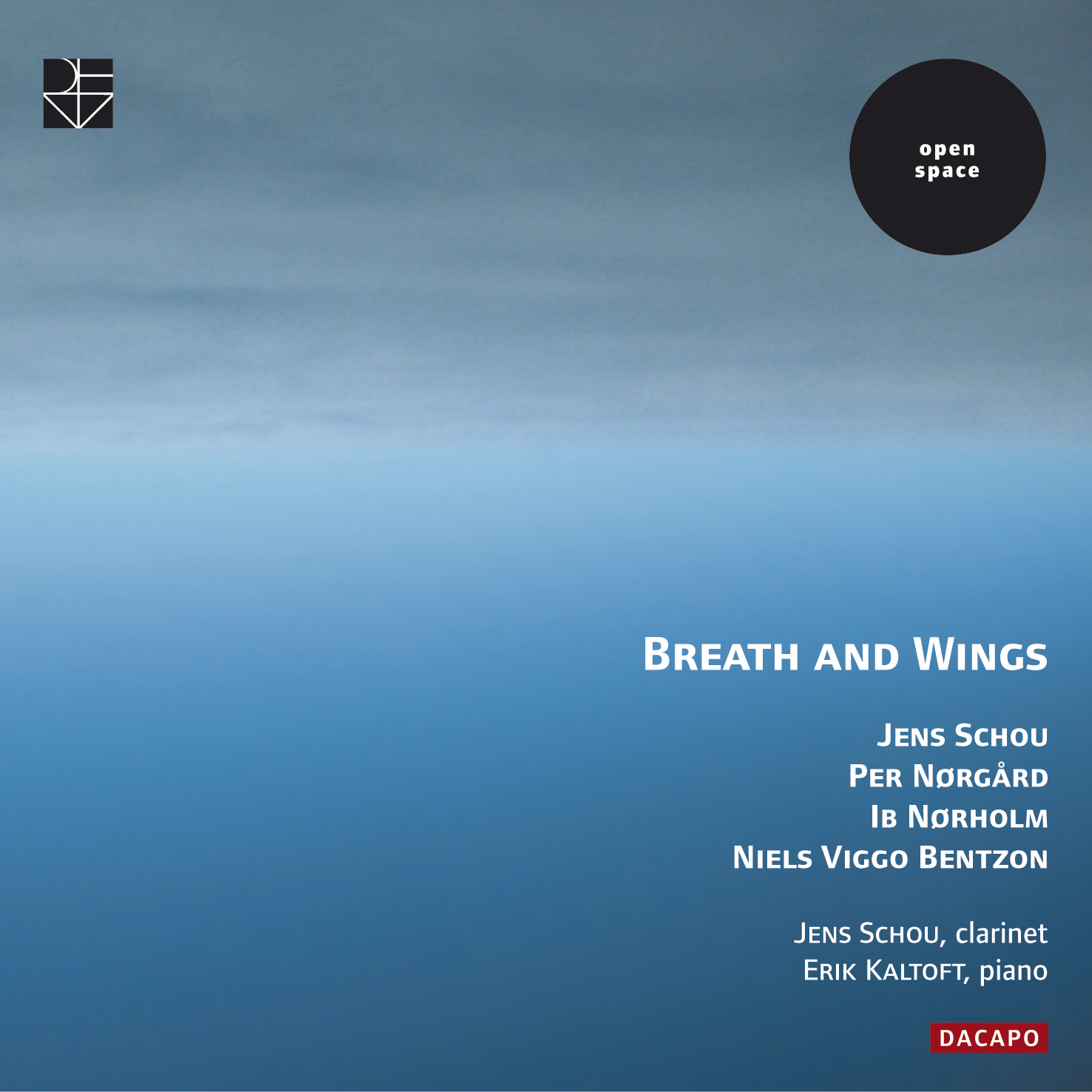 This CD features new Danish music for clarinet. The four pieces range in time and space from Niels Viggo Bentzon's neoclassically inspired solo sonata composed in the 1950s to two brand new works for clarinet, which see their first recording with this CD. One of the new works is Ib Nørholm's solo piece A Song of Breath and Wings, written at the urging of the clarinettist Jens Schou. The other new work is not really a work in the classic sense, but a template for improvisation, created in a collaboration between the composer Per Nørgård and Jens Schou. It is called Prelude to Mythic Morning. Of the music Jens Schou writes:

"In Prelude to Mythic Morning sonority itself is made into a theme. The music, as it sounds improvisationally, really only has an obligation to the resonance of the space. The tone row, and thus the tonal basis of the improvisation process, have been indicated by Per Nørgård. In the tone row or formula pointed out by Per Nørgård the different harmonics interact - the third, fifth, seventh, ninth and eleventh partials - in ways that recall the imperceptible coming and going of the tide. A magnetic attraction between the notes makes the row an ideal basis for contemplative improvisational expression as in Prelude to Mythic Morning. The great question of what came first - the notes or the music? - arises in the oddest way in this harmonic-playing. It is asked again and again. Small melodic - but also rhythmic - approaches can be found in the harmonic weave of the playing ... In ‘the blue space' composer and musician improvise together."

Per Nørgård's Mythic Morning for choir and bass clarinet is to be published in 2004. It is being recorded by Jens Schou and the vocal ensemble Ars Nova on Dacapo-CD 8.226019.

Jens Schou has chosen to record Prelude to Mythic Morning with Per Nørgård's Letters of Grass - a work for clarinet and piano that is a spin-off from Nørgård's collaboration with Jens Schou's trio of many years LINensemble on the work that gave the trio its name - Nørgård's LIN for clarinet, cello and piano from 1986.

About Letters of Grass Jens Schou says: "The Chinese title of the work, Cao Shu (grass writing), is the name of a Chinese calligraphy type whose characteristic feature is that it is executed very quickly and with spontaneity. The forming of the characters is inextricably linked with the content of the text. By simply looking at the appearance of the text the observer/reader should be able to get a clear impression of the content. The slightly offhand lines of the lettering have the object of expressing what cannot be said by words alone." Letters of Grass is dedicated to Jens Schou and Erik Kaltoft.

Jens Schou had wanted a work based on a hymn from the composer Ib Nørholm. However, it is not so much Thomas Laub's simple hymn tune after Grundtvig's text Sov sødt, barnlille! ("Sleep Sweetly, Little Child") as its components - first and foremost the introductory fifth leap of the melody - that forms the basis of Ib Nørholm's solo piece A Song of Breath and Wings. Jens Schou says:

"Ib Nørholm's piece is divided into three sections: prologue, main section, epilogue. The first interval of the hymn tune is a fifth, and a leap of a fifth also opens the prologue ... The actual main section, Song, also begins with an instrumental fifth leap - a real leap, since it is a fifth plus two octaves. In this leap the whole inwardness of the hymn is evident. The lowest note of the clarinet becomes the solid rock, the ostinato, and a delicate cantabile unfolds high up below the ceiling ... The quintessence of the hymn colours the further development in all its radical restructuring of the material of the hymn, including all its omissions. The unfolding of the piece towards its own epilogue is like a lyrical paraphrase of the concept-pair creation/re-creation; or with an expression used by Nørholm, contra-creation." A Song of Breath and Wings is dedicated to Jens Schou.

For Niels Viggo Bentzon, all talk of inspiration was far too easy a matter, in conflict with the realities - far too "poeticizing", as he himself put it. In Bentzon's essay collection Seks Monologer from 1956 he says of creation - and thus of inspiration - that "I have never, after finishing a work, been able afterwards to relate its special character to any particular impression - indeed not even a mood! The memory of the moment of its genesis is diffused into a mist and is not linked with any particular emotional content."

"This statement comes from the exact period when Niels Viggo Bentzon was composing his masterpiece Sonata for Clarinet and Piano op. 63", Jens Schou emphasizes, and continues:

"What is certain is that for Niels Viggo Bentzon it was crucial to write truly dreaming music, as here in the second movement of the sonata (Largo); not, as has so often been done, to call the slow movement Träumerei and then claim that the inspiration came from a dream! In the same way, the whirling, dancing lightness that is so excellently manifested in the third movement is neither heralded nor contained in the movement name Rondo that it has been given."

"Thousands of movements from all ages bear the designation Allegro. The first movement of the clarinet sonata is an early, jazz-inspired, virtuosically flowing, sanguine and spirited exploitation of the classical sonata form. The name Allegro thus tells us nothing about the specific vitality of this particular movement. The formal straitjacket is rather a matter of bringing out metaphorical imagery."