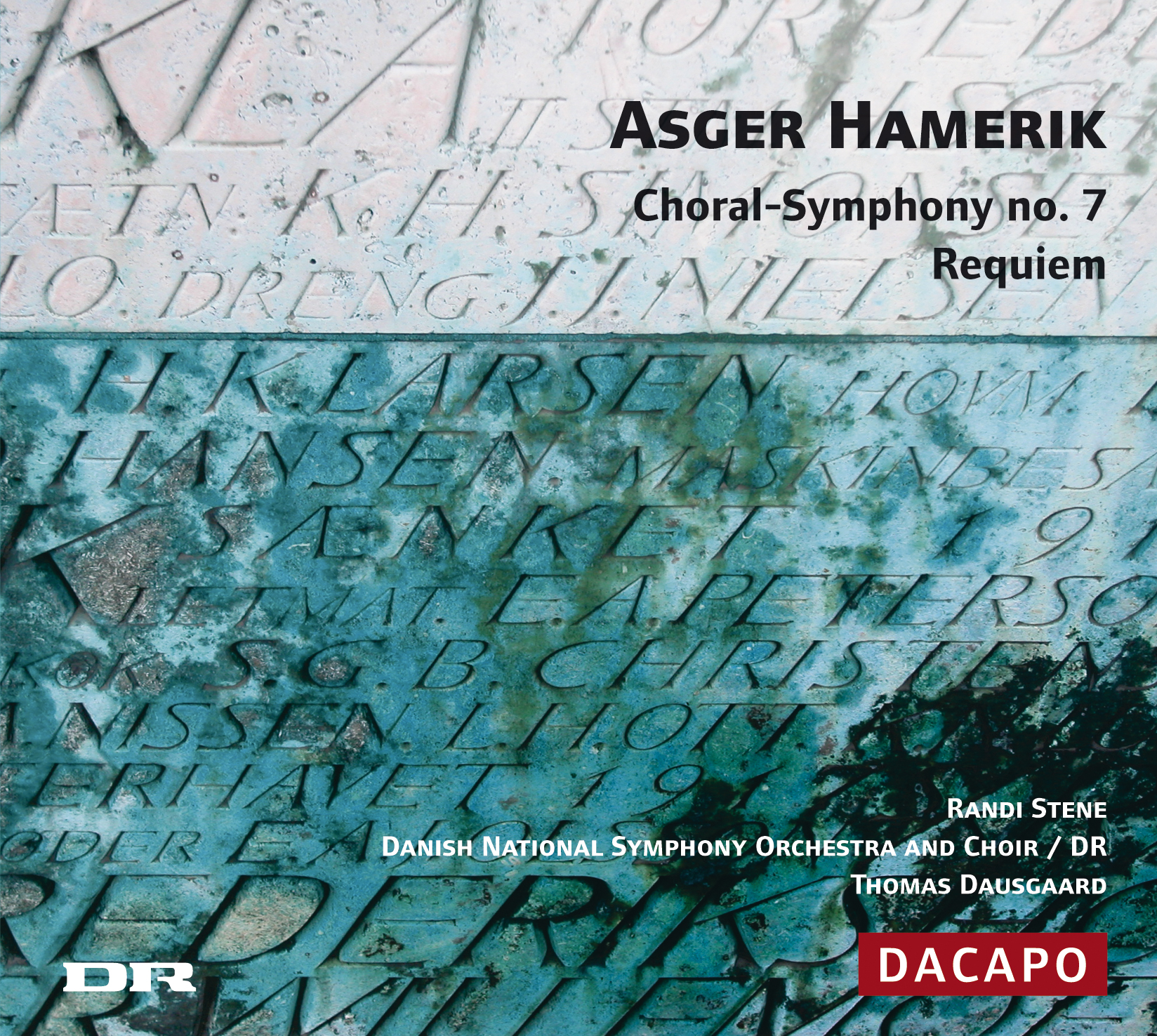 Today, with the Danish musical world well on its way to rediscovering the composer Asger Hamerik, it may seem a little strange that during his lifetime he was the best known Danish composer after Niels W. Gade outside the borders of Denmark. He travelled more and farther than any other Danish composer (including Gade) and was a member of a number of international juries in composition competitions.

He was born Asger Hammerich, but changed his surname to the less German-sounding Hamerik when he left Germany and went to France as a result of the outbreak of the Danish-German war in 1864. He had come to the world in Copenhagen on 8th April 1843. His father was a well known professor of theology in his day, and the family had in fact expected Asger to take a theology degree; but his musical talent was so obvious that he was allowed to study composition with both Niels W. Gade and J.P.E. Hartmann, both of whom were related to his mother.

In Berlin Hamerik studied with Hans von Bülow. They remained lifelong friends, and Bülow would probably have exerted even more influence on the young Dane, had not political circumstances forced Hamerik to leave Germany.

With him he had a letter of recommendation to Hector Berlioz, who accepted him as a composition student. Gradually they too established a more friendly connection, and apart from a few short trips Hamerik remained in Paris until Berlioz died in 1869.

This was followed by some years of travelling, when he wrote among other things the one-act opera La Vendetta, premiered in Milan in 1870. The next year Hamerik was in Vienna, where he was visited by the American consul, who offered him the directorship of the conservatory and musical society in Baltimore known as the Peabody Institute. After taking advice from von Bülow and others he accepted the offer and in August 1871 went to Baltimore, which was to be his home for the next 27 years. There he was given an orchestra which by then had 80 musicians at his disposal. This meant that his composition work to some extent changed its focus and concentrated on orchestral music; at first a series of Nordic Suites, some of which were based on Scandinavian songs and ballads, and then symphonies. When the Peabody Institute closed for the summer, Hamerik would escape from warm, damp Baltimore to the far more pleasant climate of the small fishing village of Chester on the Atlantic coast of Nova Scotia, Canada, where he also found the time to compose. At intervals - but far from every year - he also took the long journey home to Denmark, with which he otherwise only maintained contact by letter. So it was in a letter - but from New York - that he announced in 1894 to his Danish family that after many years as a bachelor, he had married a former piano pupil from the Peabody Institute:

Today, 5th June, I have married Margaret Williams, daughter of a landowner in the southern state of Tennessee, descended on her mother's side from the English Duke of Wharton. She is 26 years old, of medium height, slender with bright eyes and light chestnut brown hair, of a mild and gentle nature with harmony of mind and firmness of character."

The honeymoon went to Europe and ended in Copenhagen, where the family got to know its new member before the couple went back to Baltimore, where the Peabody Institute was to celebrate the centenary of the birth of its founder in 1895. As far as the music was concerned, the choice was made to have Hamerik premiere his opus 34, a Requiem which he had composed in the summers of 1886 and 1887 in Chester, and which his brother, Angul Hammerich, a music professor and critic had tried in vain to coax the Chorus of the Royal Opera in Copenhagen to premiere in its annual Easter concert in Copenhagen Cathedral.

The Requiem therefore lay idle awaiting a suitable occasion, and this now came, with two magnificent concerts on 5th and 6th April. The choir had more than 300 singers, and the work was given more than 60 rehearsals. The contralto soloist, Julie Wynan, had been fetched from New York, and the success of the work was huge - The Baltimore Sun wrote that the music was "of overwhelming beauty".

Certainly Hamerik himself was not a Catholic, but he was a close friend of Cardinal Gibbons in Baltimore and is also known to have had discussions with a Catholic priest in Chester about the textual content and its meaning. As Berlioz had done a half-century before in his Requiem, Hamerik combined the first two parts of the Mass for the dead, the Requiem aeternam and the Kyrie eleison, into one movement where the quiet C minor prayer for eternal peace yields to C major wish for eternal light. The subsequent Dies irae quotes the first notes of the old Gregorian melody of the text about the Day of Wrath, just as Berlioz had done (in his Symphonie fantastique). In the Tuba mirum, Judgement Day is announced with ringing brass fanfares in andante maestoso, again like Berlioz. But unlike his mentor Hamerik creates a new continuity by making these fanfares a recurrent orchestral element in the Sanctus movement.

The intervening Offertorio brings the contralto soloist to the fore, and she appears again in the concluding Agnus Dei, now also with the choir. The cyclic form of the text (it returns to the introductory section) is also reflected in the music, in the same way as we see in Mozart (or his ‘completer', Süssmayr) and Berlioz.

The first performance of the Requiem in Baltimore prompted very fine reactions from the press, and Hamerik was pleased with his collaboration with the director of the local Oratorio Society, Joseph Pache, who like himself had been a pupil of von Bülow. So he said yes when he was asked for a new work for choir and orchestra, for which he wrote the text together with his young wife at the end of 1897 and then composed in January-February 1898.

But by then his time in Baltimore was running out. The board of trustees had decided not to hold regular symphonic concerts any more, and in February Hamerik reacted by handing in his notice to the end of the academic year. As early as 21st April 1898, just seven days before the first performance of the new choral symphony (which at that time bore the title Life, Death and Immortality) he suddenly left the city, followed a week later by his wife, who was pregnant. We do not know if she was present at the first performance in Baltimore's brand new Music Hall (built with the Gewandhaus hall in Leipzig as its direct model), where the Oratorio Society and the Peabody Orchestra were conducted by Pache.

In October their son Ebbe (the later composer) came to the world in Copenhagen, and then the family rested on the French Riviera. After this Hamerik was ready for a European tour, during which he presented his own works in Berlin, Vienna, Munich, Dresden, Leipzig, Paris and Milan, before settling down finally in Copenhagen in May 1900. There he composed very little in the course of the long evening of his life - he died at the age of 80 on 19th July 1923 - and lived more or less in retirement as far as Danish musical life was concerned.

The Requiem remained Hamerik's own favourite work, and he made sure he included the Offertory movement in the above-mentioned presentation concerts, where it elicited positive comments from all sides: "Belle et émouvante" (beautiful and moving) said Le Figaro. "Eine echte Kirchen-musik" (a true work of sacred music) wrote Wiener Sonntagszeitung, although the concert in Vienna was held in the citadel of secular music, the Golden Hall of the Musikverein, where the reception after the concert glittered with celebrated names like the soprano Nellie Melba. And "classically weighty" was the judgement that could be read in the Danish newspaper Politiken, which had considered the tour important enough to send its reviewer Charles Kjerulf to Berlin.

In the spring of 1908 Victor Bendix finally put the Requiem on the programme of the Danish concert society Dansk Koncertforening, but the work proved difficult to rehearse for the amateur choir and at first had to be performed in extracts. On the other hand the success of the complete performance in November the same year was so great that the work could be repeated at a Palæ concert on 13th December, now conducted by Hamerik himself. After this there was only one, not in fact very successful performance in Hamerik's lifetime, in 1921.

One might have imagined that someone on the Copenhagen concert scene would have got together a Requiem performance to mark Hamerik's 75th birthday in 1918. But instead it was celebrated with the Choral Symphony, which he had in the meantime provided with a Danish text and revised, both textually and musically - twice in fact.

Whereas in his first six symphonies Hamerik had respected the classical tradition by writing in four movements and with a definite key as the basis for the work, this time he composed in three movements and began in a sombre D minor, only to end in a jubilant C major. He still considered it natural to strengthen the unity of the music by letting thematic material recur from movement to movement, here primarily in the form of a hymn-like theme which we already hear in the slow introduction to the first movement, and which later comes to play a crucial role, not least in the final movement.

It was the shaping of this theme in particular that was a core issue in Hamerik's reworkings. A first revision was premiered under his own baton in Dansk Koncertforening on 1st December 1903, but since then the work had not been played in Denmark - but was played once more in Baltimore in 1907, although it is not quite clear whether this was the definitive version finished in 1906 and published the next year by the German publishing house Johann André.

At all events it was the definitive 1906 revision that was used on 31st March 1918 in the birthday concert at the Casino establishment in Copenhagen, conducted by Kristian Ribers. The aging composer and his family sat in the box as guests of honour, and at the end of the concert he thanked the participants. According to Berlingske Tidende's reviewer (who signs himself A.T.), he said among other things that it was in that very hall at Casino that he had himself conducted the Choral Symphony back in 1868! It isn't always the truth that gets printed!