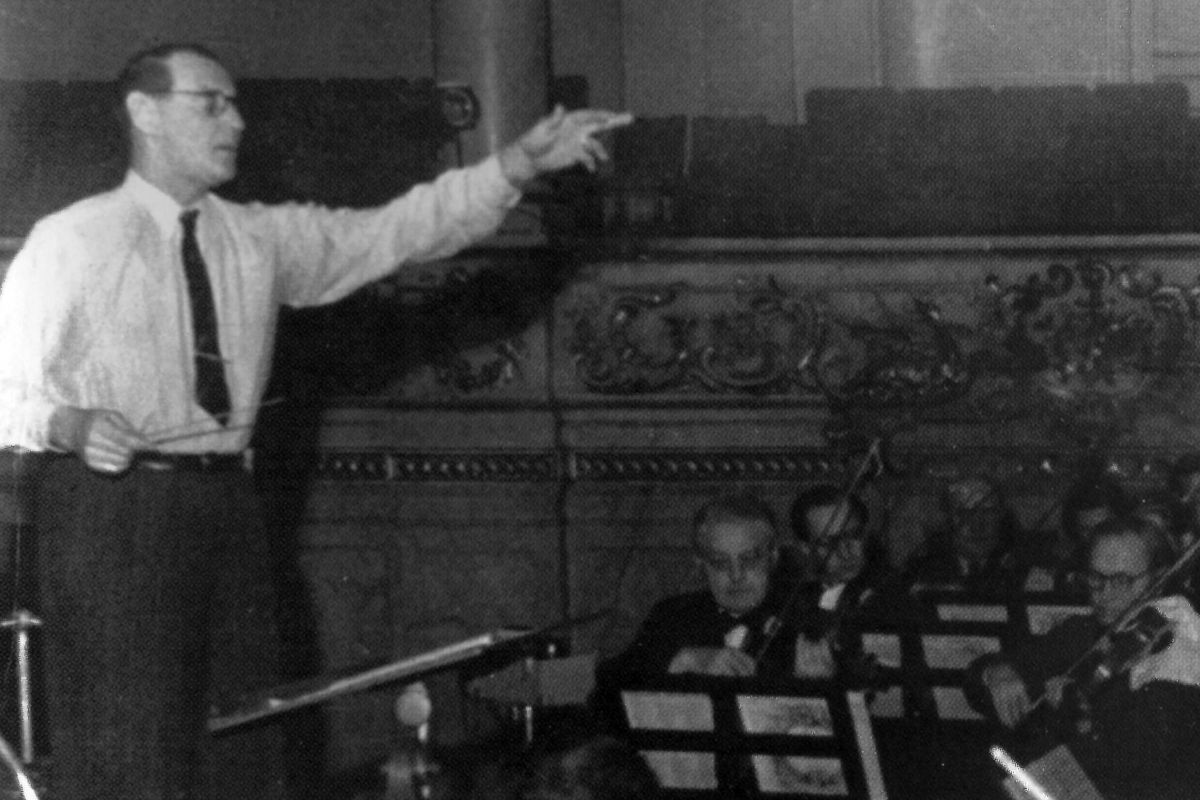 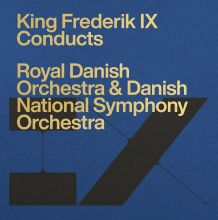 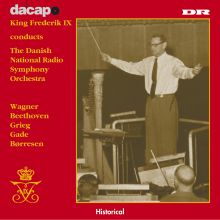 The Danish King Frederik IX’s preoccupation with music must be described as atypical, in fact, unique for a member of a royal house, inasmuch as it is hardly possible to cite other examples of ruling monarchs whose favourite pastime was orchestral conducting. That the work of conducting, even if it is sporadic, requires a large number of other participants goes without saying, and King Frederik’s cultivation of music was indeed a rare combination of something extremely private and something to some extent public since only a few chosen spectators were able to watch the King work with the orchestras, while a considerable number of the Danish professional orchestral musicians of the day were able to make music with the King. This paradox, and the fact that as a conductor Frederik IX, although self-taught, favoured technically difficult challenges in the great symphonic repertoire, in particular, music from Wagner’s operas, gave the King’s unusual musical activities a certain aura.

At the same time, the musicians always had the most profound respect for the humility the King showed at rehearsals and private concerts. This is the clear impression that is confirmed by the musicians who worked with the King, and it is a description that accords well with the general view of his personality. Frederik IX was born at Sorgenfri Palace on 11th March 1899, the eldest child of Prince Christian and Princess Alexandrine. At home, music played a central role since the Princess played the piano and on the whole took a lively interest in concert life within and outside the borders of Denmark. She was a frequent concert-goer and gave Danish musical life her support, for example through the patronage of several concert societies, primarily Musikforeningen, Aarhus Filharmoniske Selskab and Den Danske Richard Wagner-Forening. In addition, she was a frequent visitor to the Bayreuth Festival, as she was a great lover of the music of Richard Wagner. Although it was undoubtedly the influence of his mother that encouraged the musical interests and activities of Frederik IX, it should be mentioned that on his father’s side too a strong musical tradition can be demonstrated. For example, his paternal grandmother, the Swedish-born Queen Louise, and his great-grandmother, King Christian IX’s Queen Louise, who came from Hessen, were both very interested in music.

The young Prince Frederik was by no means pressed to play a musical instrument, but in 1911 Crown Princess Alexandrine consider the time was ripe to engage a piano teacher for him. The choice fell on Lizzy Hohlenberg, who for the next six years introduced the Prince, who on the accession of his father, Christian X, in 1912, had become Crown Prince, to the literature of the piano. At an early stage, a warm friendship arose between the teacher and her pupil, and even after the actual piano teaching had stopped, the Crown Prince and Lizzy Hohlenberg met to play piano duets. A quite crucial event occurred on 16th March 1913. In the evening Queen Alexandrine had taken her eldest son to the Royal Theatre for a performance of Henrik Ibsen’s Peer Gynt with Edvard Grieg’s music. The Queen had taken the score for the stage music, and the experience of this and the instruments of the orchestra, and perhaps the combination of the sounds with the printed music, made a great impression on the Prince. The conductor for the evening was the Royal Orchestra kapelmester Georg Høeberg, and after a Royal Orchestra concert two years later, the Queen and Crown Prince Frederik contacted Høeberg to ask him if he would have a talk with the young music-lover: "He is so interested in music”, as the Queen said. Høeberg agreed, and in the years ahead he and the Crown Prince met frequently to talk about music, including interpretations of the great masterpieces. At no point, however, did these meetings develop into lessons in conducting. At a very early stage the crown Prince had in fact set his heart on conducting, but putting this into practice was not so straightforward. An opportunity was to arise, however.

At the palace of Amalienborg, Queen Alexandrine liked to play piano duets, and in 1915, with this as a basis, she gathered a small group of musical family members, friends or close members of the court, who came to function as a whole small orchestra. It was with this ensemble that Crown Prince Frederik rehearsed and performed a number of works ranging from opera overtures to Beethoven's First Symphony. The Crown Prince worked with the small orchestra until as late as 1921, but to extend his repertoire and give himself freer scope in orchestral terms the Crown Prince began to conduct with gramophone records. So he "conducted” concerts up to a couple of hours long using records alone. For practical reasons, he noted in his scores where the records were to be turned or changed. No small project at a time when the shellac records placed narrow limits on playing time! It was not only skilled amateurs the Crown Prince was able to work with. At an early juncture, he contacted the Band of the Royal Lifeguards, and it soon became a regular tradition for him to conduct the ensemble in a concert on his birthday.

The young conductor performed with the Band of the Navy too, but many years were to pass before the Crown Prince had the chance to play the role of conductor with a symphony orchestra. In 1938, the Royal Orchestra, the trustees of its Pensions Fund and the Royal Orchestra Society decided at a meeting to ask Crown Prince Frederik whether he would take over the patronage of the so-called Widows’ Pensions Fund Concerts, and on the same occasion, they offered him the chance to conduct one of the rehearsals for the upcoming Royal Orchestra concert. The Crown Prince accepted the offer and thus for the first time conducted the Royal Orchestra on 9th March 1938. The programme consisted of the last movement of Tchaikovsky’s Sixth Symphony, the Pathétique, and the Prelude to Wagner’s opera The Mastersingers of Nuremberg. And thus a tradition had been founded, since the Orchestra continued, until the death of the King, to hold an annual private concert with him wielding the baton. The event had the character of a birthday present and was thus placed as close to 11th March as possible. After the Occupation, Crown Prince Frederik was to have his greatest challenge yet - if not ever - as a conductor. The Royal Theatre asked him to conduct a performance of Mascagni’s one-act opera Cavallería rusticana on 14th March 1946. the opera was in the repertoire of the Theatre, and Egisto Tango had been in charge of the musical rehearsals, but it provides food for thought that after a few piano rehearsals and one full rehearsal the Crown Prince succeeded in stamping the performance so much with his own personality that it differed strikingly from Tango’s version. It has been mentioned that Frederik IX, ever since his days as Crown Prince, had wished to keep his musical activities within the confines of private life.

Only once did he depart in earnest from this basic principle. In 1948 the United Nations launched a great charity collection for refugees in the wake of the War, and now King Frederik and the Royal Orchestra made themselves available: the set of records now reproduced on this CD was recorded and offered as prizes in a lottery in aid of the refugees. It should, however, be emphasized that although the King thus stepped out as a conductor, he still did so incognito in a sense, since the name of the King does not appear on the records; only the crowned royal monogram on the labels reveals who the conductor was. In 1952 King Frederik participated in the festivities for the seventieth birthday of his father-in-law King Gustav VI Adolf of Sweden. At a concert at the Swedish Royal Theatre in Stockholm the King, as a birthday present for the Swedish King, conducted a programme consisting exclusively of Wagner compositions.