With his symphonies the Danish composer Rued Langgaard offered 16 vastly different versions of what a symphony can be. His captivating, complex genius made room for all conceivable idioms and a wealth of styles ranging from the grandiosely Late Romantic to the purest Absurdism. This box is the first collected recording of Langgaard's 16 symphonies based on the critical edition of the scores; recordings which demonstrate, with spectacular sound quality, Langgaards masterly grasp of the orchestra and his ecstatic view of art: "Mr. Dausgaard's keen advocacy elicits polished, persuasive accounts that live up to Langgaard's motto: Long Live Beauty", wrote The New York Times. 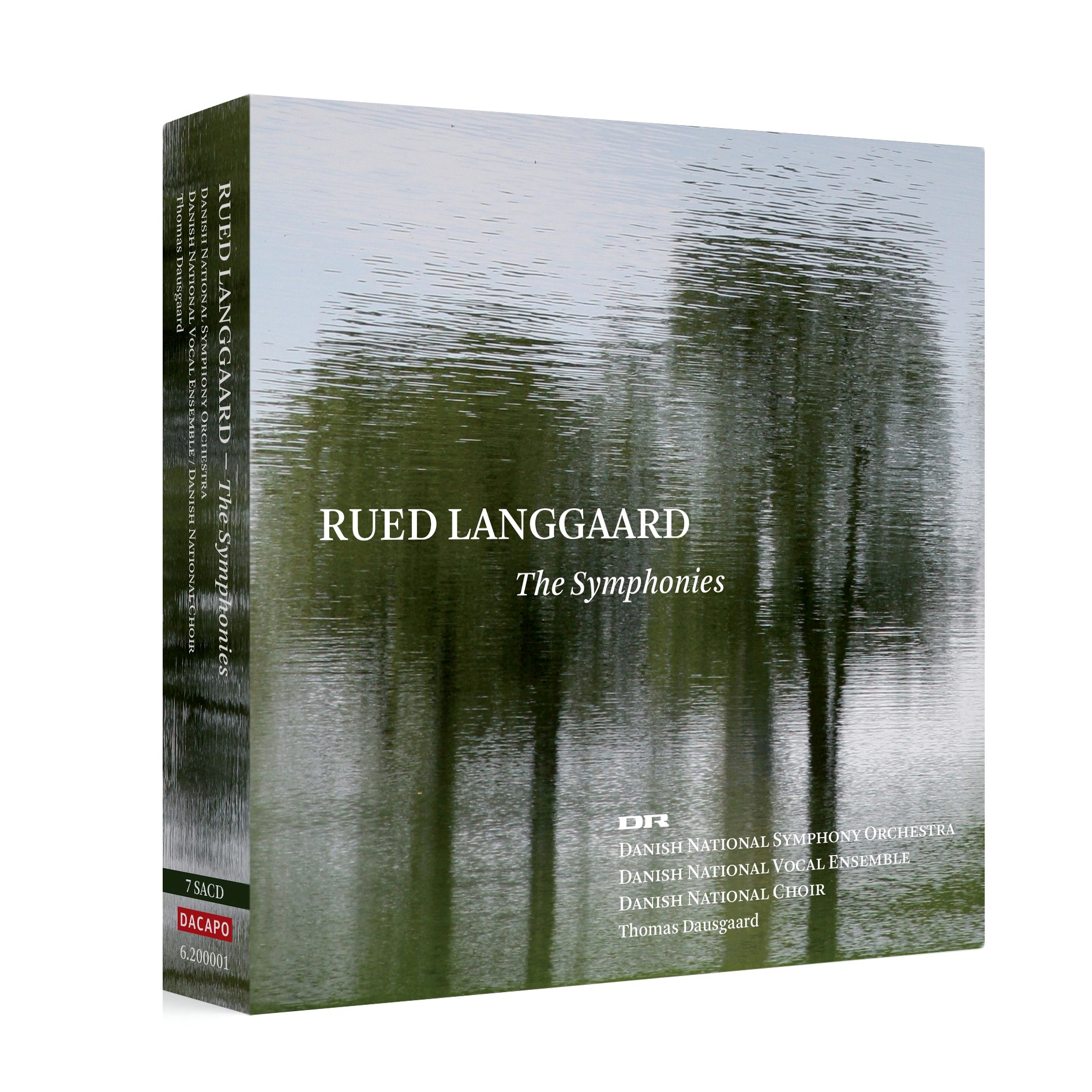 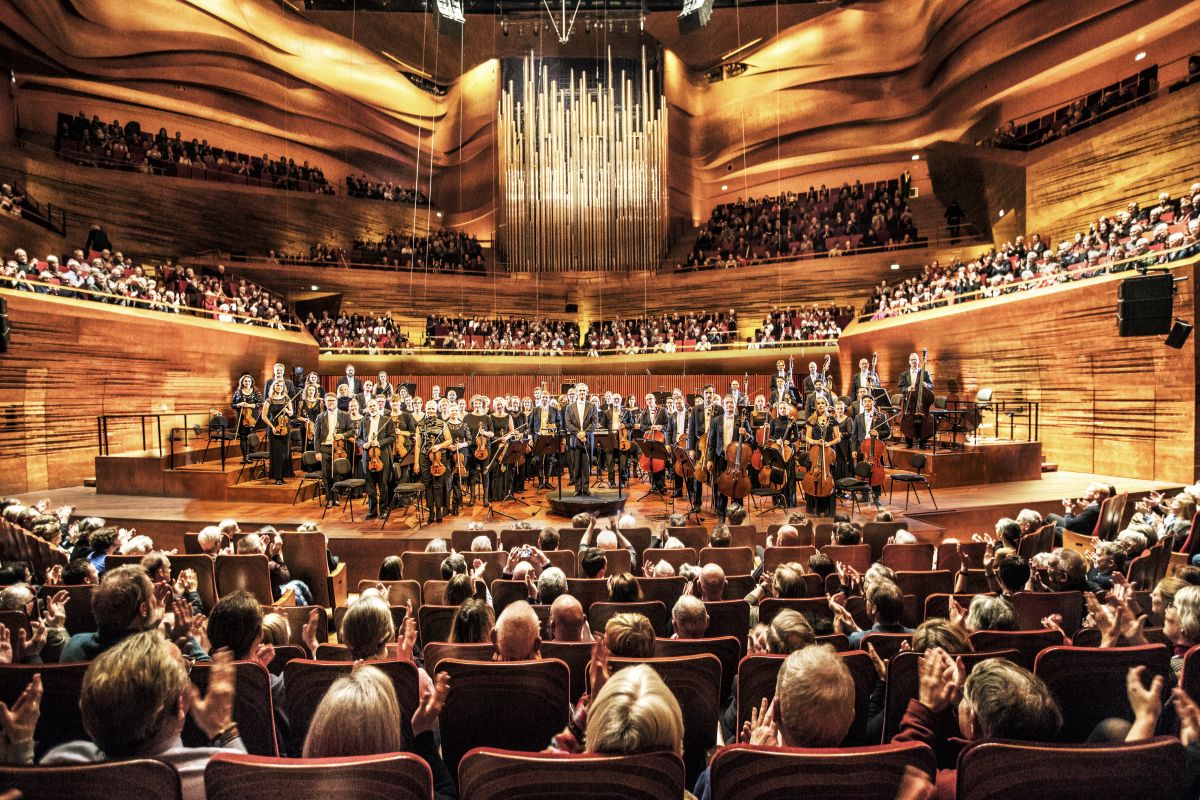 Rued Langgaard is an outsider in Danish music. His Late Romantic and Symbolist background and his passionate views on art and the role of the artist brought him into conflict with the sober, anti-Romantic view of art that reigned supreme in Denmark in the interwar years. Langgaard did not shrink from the visionary and experimental, the eccentric and extreme, and his music ventured into areas where the outlooks, musical styles and qualitative norms of the twentieth century break clash.

Rued Langgaard was born in 1893, the son of a highly respected Copenhagen piano teacher, Siegfried Langgaard, who was also active as a composer and was greatly preoccupied with musical/philosophical speculations along Theosophical lines. Langgaard’s mother was a pianist too, and he had his basic musical education from his parents. In 1905, at the age of 11, he made his debut as an organ improviser in Copenhagen, and when he was 14 his first major orchestral and choral work was performed. But the young composer got off to a bad start, since the reviewers gave it the thumbs-down; and in fact Langgaard never succeeded in being properly accepted either by the press or by the musical powers thatbe in Denmark.

So in 1911, when Rued Langgaard had completed his hour-long First Symphony, it proved impossible to have the work performed in Denmark. Langgaard had been on several study trips to Berlin, accompanied by his parents, and the Langgaard family’s contacts with conductors like Arthur Nikisch and Max Fiedler led to a world premiere of the symphony in 1913 in Berlin by the Berlin Philharmonic conducted by Max Fiedler. Yet the overwhelming success enjoyed on this occasion by the 19-year-old composer did not result in a performance of the symphony in Denmark, and the outbreak of the Great War in 1914 made it impossible for Langgaard to follow up his success in Germany itself.

The scepticism of the Danish musical establishment towards Langgaard meant that he had difficulty getting his compositions performed, and had to organize his own concerts to present his music. The expansive artistic development he experienced in the 1910s therefore went unnoticed by both critics and audiences. Important experimental works like Sinfonia interna (1915-16), Sfærernes musik (The Music of the Spheres) (1916-18), Symphony No. 6 (1919-20) and the opera Antikrist (1921-23) were either not performed or not understood in Denmark.

In his native country Rued Langgaard was alone in striving for a visionary musical idiom as a continuation of the Romantic tradition with a Symbolist basis of the kind one finds in the works of Scriabin. The tendency in Denmark was towards a questioning of the whole Late Romantic spirit, and Langgaard had to go to Germany – at the beginning of the 1920s – to experience successful performances of his symphonies. Yet there was no question of any widespread or general interest in Langgaard in the south, and the performances soon ebbed out.

The years around 1924/25 marked a major turningpoint in Langgaard’s life and music. After many years of openness and responsiveness to currents in the most recent music – not least in Carl Nielsen’s progressive works – Langgaard changed tack and turned to a Romantic, pastiche-like style with Niels W. Gade and Wagner as his exemplars. He indicated that he felt betrayed by the age and by the musical establishment, and he hit out at Carl Nielsen, who in his view had a status that was far too guru-like. The result was that Langgaard was now given the cold shoulder in earnest. After 1930, concert performances of his works became rare indeed (they were however given quite a few radio broadcasts, especially in the 1940s). He was unable to find a job as a church organist, although he applied for innumerable posts all over the country. He did not succeed until 1940, at the age of 47, when he was given the position as organist at the cathedral in Ribe in South Jutland. In Ribe Langgaard’s music entered a new phase in which the defiant, the jagged and the absurd became more prominent.

After Langgaard’s death in 1952 his name seemed threatened by oblivion; but in the 1960s the renewed interest in ‘neglected’ Late Romantics shed new light on Langgaard: it was discovered that although Langgaard had fundamentally been a conservative composer, there were features in his music that strangely prefigured the static music, collage music and minimalism of the 1960s and 1970s.

One has to look hard through the music of the twentieth century to find as long, distinctive and varied a series of symphonies as Langgaard’s. With 16 numbered symphonies – composed in 1908-51 – he has only been exceeded quantitatively on Danish soil by Niels Viggo Bentzon (1919-2000), who reached number 24. Langgaard’s symphonies vary enormously in duration, form and tonal idiom. No clear development from No. 1 to No. 16 is evident, but there are interfaces between Symphonies 3 and 4, 6 and 7 and 10 and 11. The formal extremes are the great Late Romantic Symphony No. 1 (60 mins.) and the monothematic one-movement Symphony No. 11 (6 mins.). There are vocal elements in Symphonies 2, 3, 8, 14 and 15, and Symphony No. 3 is in reality a piano concerto. In the musical style, the Romantic and Late Romantic preponderate, but there are striking examples of forms of expression that are a match for the progressive idioms of the period (Symphony No. 6 and the beginning of No. 15).

Langgaard had no wish to create an independent, original, modern musical language. On the contrary, he deliberately took his point of departure in the legacy of Gade, Wagner, Tchaikovsky and Richard Strauss. On the face of it some of the works in fact sound as if they were composed 50-75 years too late. But viewed as a whole Langgaard’s symphonic cycle is an original and thoughtprovoking contribution to the musical history of the twentieth century. In the first six symphonies he tries out the possibilities of the genre in very different styles. From Symphony No. 7 the outsider emerges in earnest with the paradoxical and hazardous project of demonstrating the continued relevance and potential of the Romantic aesthetic in a modern, secularized age.

The tonal idiom of the Romantic epoch is that of ‘truth’ in Langgaard’s view, because it communicates a spiritual message that is generally comprehensible. Langgaard therefore culls all the shelves of Romanticism uninhibitedly, but often gives the familiar a special new emphasis and puts it in an unconventional setting, such that the demonstrative, abrupt and theatrical emerge. One senses that his attitude towards the Romantic clichés is one of awe and distance alike. In order to be understood, Langgaard felt that he had to go to extremes, and with Symphonies 11 and 12 in particular the concept of the symphony is pushed to the point of absurdity. Thus Langgaard sacrifices his own role as declared exponent of a harmonious message of beauty. The conservative, nostalgic composer at the same time becomes a modern ‘divided’ composer who relates with seismographic sensitivity, if not desperation, to his time and his isolated situation.

The concept of Late Romanticism is not adequate to Langgaard’s symphonies if in using it one thinks of organic breadth, great contrasts and symphonic climaxes. Langgaard is as a rule firm and succinct in his formulations and rhapsodic in his form. One can see an affinity with ‘effective’ utility music like Korn­ gold’s film music or Prokofiev’s ballet music; but unlike Korngold, Langgaard eschews all sentimentality. It is characteristic that the symphonies begin pithily and clearly – there are no slow, searching introductions. And it is the mood and character of the beginning that institute the development of a work, not a predetermined form such as sonata form. With the one-movement form he often uses, Langgaard can maintain an evocative world peculiar to the work throughout its course.

The colourful titles express an insistence that music has a meaning beyond the musical, a mission religious in nature. Although Langgaard only began his career after the Symbolist epoch around 1900, it has proved fruitful to see Langgaard as a Symbolist artist.

Each of the various stylistic idioms has its own symbolic meaning, and the sixteen works shed light on one another, together forming a universe with its own fascinating coherence.