“A composer whose reputation will continue to rise” Gramophone

The music of Pelle Gudmundsen-Holmgreen is at its most affecting when it is at its most absurd – like in the sinfonietta works on this recording by the composer’s longtime artistic accomplice Athelas Sinfonietta Copenhagen. The points of departure for the classically absurd PGH pieces on this album range from a red Skoda door, given to the composer by Athelas as a gift (Traffic), over randomly picked newspaper articles (Three Songs to Texts by Politiken) to general inspiration from Samuel Beckett (Repriser and Rerepriser) and Søren Kierkegaard (Og). 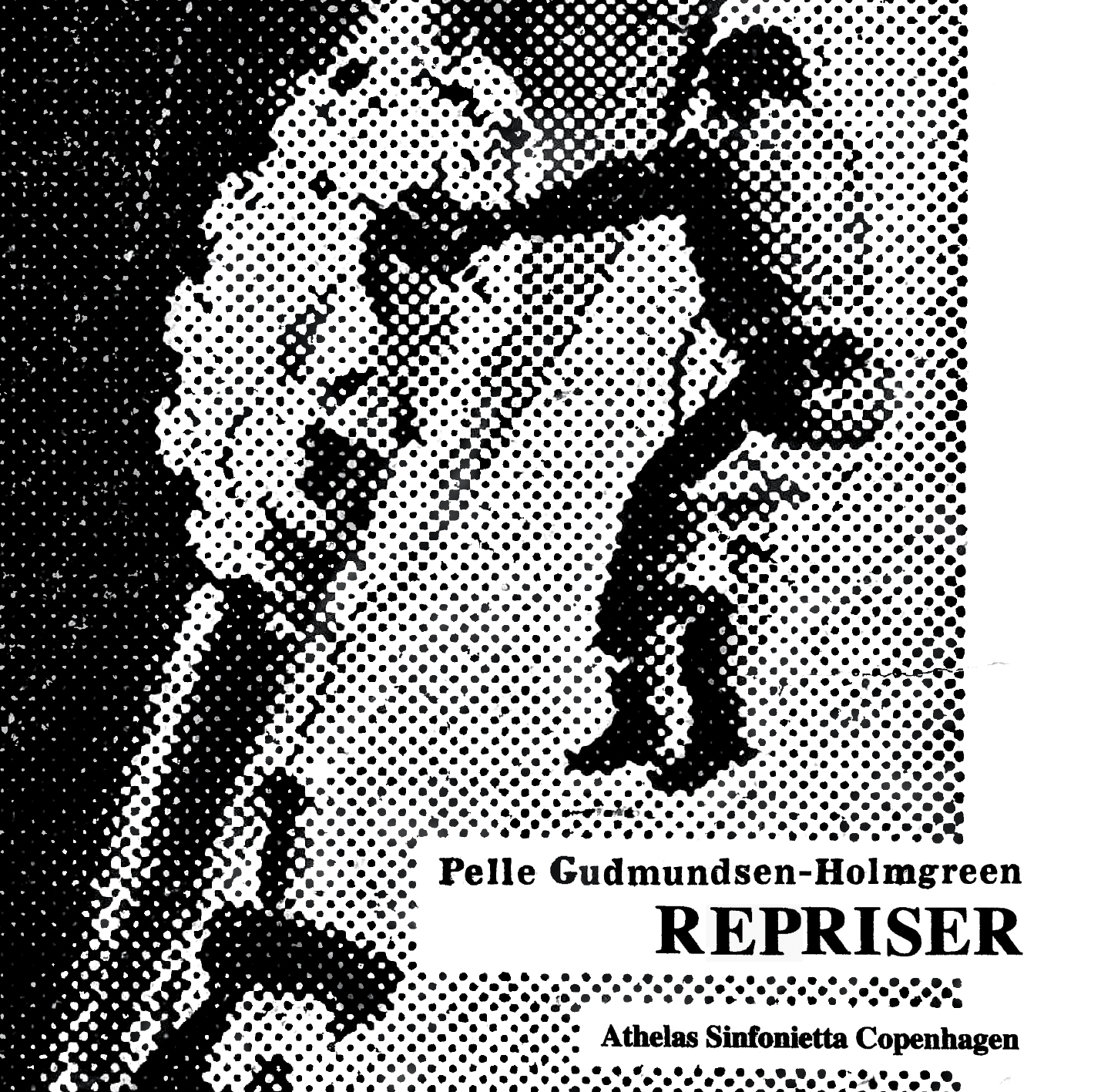 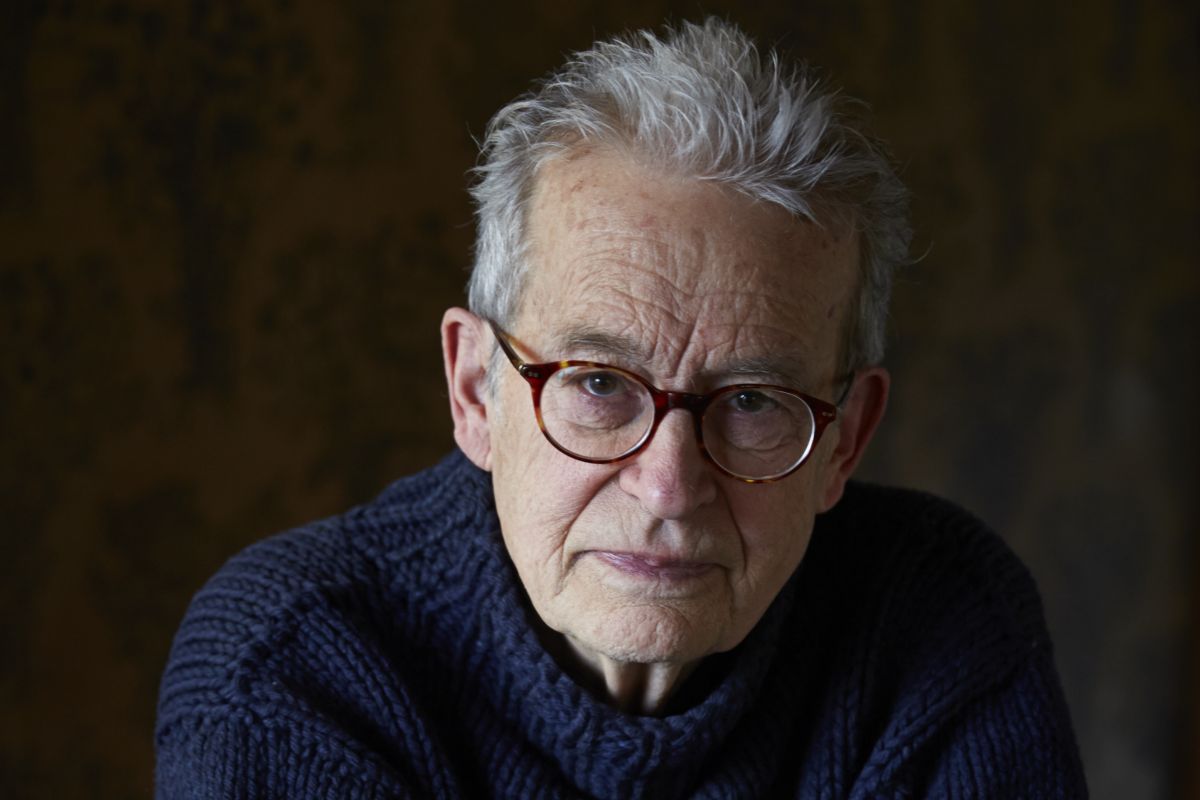 © Lars Skaaning
"Gudmundsen-Holmgreen contained much more than reluctance."
Søren Schauser, Berlingske
[..] "Ingen af samtidens danske komponister har skrevet som Pelle G.-H."
Gregers Dirckinck-Holmfeld, GregersDH
"Athelas Sinfonietta demonstrate the absurdity of Gudmundsen-Holmgreen with three 1960s works completely devoid of development, each of them a candidate for a 'Waiting for Godot' score."
Henrik Friis, Politiken
"the banal and grotesque make a wonderful pair"
Peter Dürrfeld, Kristeligt Dagblad
"Full of surprises and reflection – and suited for repeated listening"
John Christiansen, jcklassisk
"an unparallelled richness of imagination"
Mikael Krarup, Fyns Amts Avis
"With an increasing number of advocates among conductors and ensembles, Gudmundsen-Holmgreen is a composer whose reputation will continue to rise"
Liam Cagney, Gramophone
"These works are not meant to be relaxed to, with a snifter of brandy by your side as you sit easy in front of a roaring fire"
Raymond Tuttle, Fanfare
SELECT PREFERRED FORMAT TO DOWNLOAD SINGLE TRACKS.

Music out of little things

‘If you go to the concert hall, you are not supposed to laugh. You have to have some manners. You agree to behave. You don’t go in nude, for instance.’ With the word ‘nude’, Pelle Gud­mund­sen-Holmgreen is speaking figuratively, of course. What he means is that you wouldn’t ask an alto to stand on a concert stage and sing banal business reports from the back of an old newspaper. You wouldn’t write an intense, multi-movement duet scored for cello and car horn. You wouldn’t dream-up an ensemble piece focusing on the dismembered door of a red Skoda. Of course you wouldn’t. No chance. Those things just aren’t done.

Except they are. PGH has done all three. He has stridden nude into the concert hall more times than Cage or even Ives. But for all its tearaway invention, his music tends to enchant more than it shocks. Its constant breath sounds much louder than its occasional shriek. Its physical qualities feel close and animalistic; its judders and ticks as natural and inevitable as those of our own bodies. Often his music is at its most intensely affecting when it’s at its most absurd: when stuck in a cadential cul-de-sac or when faced with elements that it considers, itself, to be laughably banal or incompatible.

As a composer, PGH has not abandoned tonality or form; he is more likely to tease or embrace those old rubrics than rail against them. As such, his music can feel devoid of human calculation. It has developed ‘a precise ambivalence which allows it to snarl at itself, to tell itself to shut up’, says the musicologist Ursula Andkjær Olsen. Like small, shuffling animals set on sniffling discovery, the works on this recording hunker-down and begin their journeys, attempting to make some sense of world around them – one miniscule corner at a time.

At the end of an Athelas Sinfonietta concert marking PGH’s sixtieth birthday in 1992, the orchestra’s players unveiled their present to the composer: the door from a red Skoda hatchback. In the speech that went with the presentation, the musicians made it clear that they expected a new work from PGH in which the door would be used as an instrument.

The musicians knew that their gift – not a Mercedes door but a Skoda one; not a complete object but a part of one – would set those childlike cogs in PGH’s mind turning. At the very least, it would activate his fascination for the sonic potential of scrap, junk and objets trouvés. But the door proved too much – or too little. PGH declared that it contained ‘not a single worthwhile sound’, and resolved to write a piece that would include ‘other corny sounds instead.’

Still, the resulting work owed its soul to that torn-off door. Traffic was first performed by Athelas Sinfonietta in 1994, a work ‘indebted to Satie, Varèse and Spike Jones’ according to the composer’s own inscription in the score. ‘Surviving contemporary metropolitan traffic is a question of your position – standing, walking, running or sitting’, he continues, ‘surviving is a question of…keeping your ears and eyes open for the hidden rules and regulations, systems and structures.’

Regulation, system, structure – really? Yes, not so much in thematic or developmental terms as in the physical organisation of what sounds when; what, from the almost endless possibilities presented by a sonic cityscape, might form a legitimate or even fruitful counterpoint. Traffic is scored for brass and winds, amplified string quartet, piano, harp, electric guitar and bass guitar and two percussionists playing oil barrel, cow bells, rattle, car horns, nuts and police whistle (among more traditional instruments). That, potentially, is a lot of noise.

Perhaps Traffic’s ‘development’ is in the distillation of those component parts, the emergence of something radiant from something apparently ugly; in the music’s ability to pick-up on its own clues to a possible exit. From the chaos of the work’s opening – you might imagine it as a round­about on the outskirts of Rome rather than a conscientious crossroads in Copenhagen – suddenly none of the usual ‘rules’ apply; it’s each vehicle and/or creature for itself. But in making unlikely friends, believing beyond belief in something, our little creature makes it out of the city alive.

Repriser and Rerepriser speak of PGH’s tendency in the 1960s to distance himself from the idea of music solving a problem, journeying to triumph or resignation. Repriser (Recapitulations), instead, takes its lead from Samuel Beckett – PGH’s ‘eternal challenger, confirmer and contributor’ – in its focus on meaninglessness. ‘I have nothing to say and I’m saying it’, said John Cage. But didn’t he mean, in that statement, that musical fascination can stop at the point of pure sound while still proving complex and beautiful?

Beckett’s text throbs with life at its most meaningless because of its linguistic richness – its sound. As in Tricolore, in Repriser different sound groups are introduced to one another, each rendering the other somehow different. But unlike Traffic, these elements don’t interact in our normal musical understanding of the word. The piece’s five sound groups consist of flute, oboe, clarinet and contrabassoon (group 1); trumpet and trombone (group 2); percussion – including marimba, cowbells, gongs, tubular bells and petrol tanks of different size, among other items (group 3); prepared piano and guitar (group 4); and one of each string instrument (group 5).

Building materials have a uniform surface, but that surface can take on different characteristics when an architect places it against another, different surface. The same is true of Repriser. The individual groups don’t significantly alter their expression but their utterances are shaded differently depending which other group(s) is/are active at the same time. The conversation can be reticent. But in that sense, it’s the balletic, who-speaks-when qualities that prove most interesting. ‘The musical material is bad’, PGH has said of the piece, ‘but it gets treated like a prince.’

Thus the sound in Rerepriser is immediately more abrasive, more Traffic-like, than in its predecessor. The composer has referred to the work as ‘a pretty ugly piece’ built on ‘dirty, poor sounds’ whose roots might have something to do with the punk movement. But still, the textures shift as different groups sound at different times. There’s an archetype PGH meeting of unlikely bedfellows as carnivorous trombones and dirty electric guitars square up to the delicately treading, insect-like harpsichord. At one point a smiling, Latin-tinged dance tune begins to take root, courtesy of group 1. Not much connects PGH with his compatriot Per Nørgård, but both composers tend to prove helpless when a dance emerges in their own music as if by some ­joyous accident.

Three Songs to Texts from Politiken (1966)

If Repriser and Rerepriser take a step back from the idea of ‘a piece of music’ and focus instead on the sound on which that music depends, one of PGH’s most famous works from the 1960s has a similar attitude to text. ‘In the 1960s I hated this approach to setting texts – this idea of taking words, giving them new colour and meaning, emphasizing deeper content. I found that the meaning of a very fine poem was completely clear already, together with its sound’, says the composer. ‘Setting poems seemed to me a bad idea.’

The solution for his 1966 cycle of three songs (preceded by a Prelude and interspersed with two Interludes) was to choose plain texts from the Danish broadsheet Politiken. In some of the composer’s most overtly Beckettian music, an alto sings of the second rejection of a motion by Roskilde City Council, of the Danish government’s debating of a new finance bill, and of the centenary of shipping line DFDS.

3 Songs with Texts from Politiken shares some purely sonic qualities with the Repriser/Rerepriser works that chronologically surround it. But immediately recognizable in this piece is the PGH ‘creature’ lurking within, making its presence known with ticks, judders and fidgets. The first two songs use the same childlike, four-adjacent-note melody and two-chord guitar accompaniment; each ends abruptly, mid-sentence, on a passing note. Those two are separated by an Interlude that adds the sound of exotic percussion to the Prelude, and are followed by a second Interlude that has a more primordial intent. In the third song the alto sings in unison with the guitar and now the melody has the shape of a celestial plainchant. The text relating to DFDS – together with the ‘bum note’ that ends it and the white noise that interjects at that point – brings the whole back down to earth.

In 2012, PGH started work on a piece to mark 200 years since the birth of the Danish writer and philosopher Søren Kierkegaard, an anniversary celebrated the following year. The title Og – the Danish word for ‘and’ – refers to Kierkegaard’s first published work, Enten Eller (‘Either Or’), a piece of philosophical writing in which opposing life views are proposed by two very different characters.

‘That is very much my own way of making music’, says PGH, ‘having different paths or voices, different opinions, different things to say, and in saying those different things there might arrive a third thing that’s worth discussing.’ In Og, differing elements include brass concerned only with imposing D major slabs of music from Mozart’s Don Giovanni (a Kierkegaard favourite), and a bassoon spluttering all alone, like a lonely being trying find its voice. Strings, wind and percussion shimmy away in the meantime; a piano fires off octave rounds now and then while a harp pirouettes to the side. Mid-way through the piece this motley crew seems to be drawn hesitantly in the same direction thanks to the magnetic pull of ‘Là ci darem la mano’ from Don Giovanni. But the work’s differing characters soon relax not into Mozart but into themselves, accepting their own beauty, equilibrium, and ability to speak to each other. From the shock of the multiphonics, we see what’s real and true; music and beauty from the little things that remain.

Andrew Mellor is a journalist and critic with a particular interest in the culture and music of Denmark and the Nordic countries.