On this CD electronic music performer Frank Bretschneider and electro-acoustic composer Ejnar Kanding create new interconnections between Berlin and Copenhagen with three works from the past five years. The Contemporánea ensemble plays the two sound-creators’ versions of each other’s works, creating completely new, minimalist sound compositions in the fi eld of tension between driving force and stasis and between acoustic and electronic music. 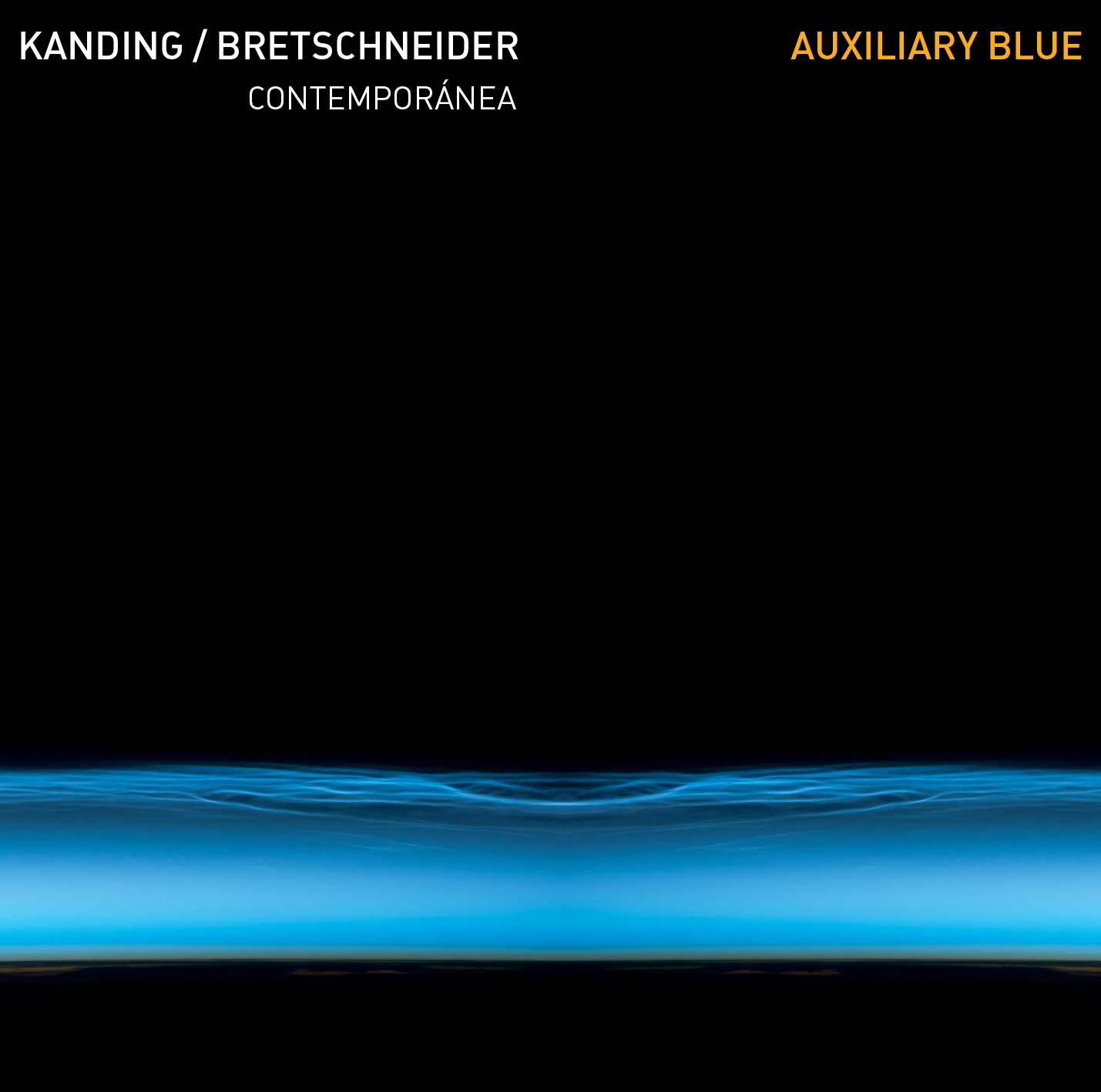 There are plenty of interesting connections between Berlin-based Frank Bretschneider and the Dane Ejnar Kanding. The obvious one, of course, between the flourishing musical life of Berlin that Bretschneider as an ex-East-German musician has helped establish for the past 30 years - and Denmark, which since the fall of the Berlin wall has increasingly become aware of a new capital only 400 km south of Copenhagen. But the music itself is also full of connections at every conceivable level. At a very basic level, the two composers have linked their artistic methods and distinctive characteristics by allowing each other to create new pieces out of existing compositions of their own. In two works on the CD, it is Kanding who creates new electro-acoustic pieces out of Bretschneider's electronic music - i.e. music for acoustic classical instruments with electronic effects. In the third instance, it is Bretschneider who remixes one of -Kanding's old -orchestral works.

This produces some quite surprising works with an exhilarating mix of stasis and pulse - of open enquiry and simple driving force - one that extremely precisely points to the respective backgrounds of the two contemporary musicians. The lives of Bretschneider and Kanding, ever since they appeared on the scene in the late 1980s, have been characterised by curiosity and openness as well as an urge to explore new territory along with people unlike themselves. A classically educated, score-writing composer, Kanding has since the mid 1990s had electronics as his sparring partner when - for example with the Contemporánea ensemble as on this CD or with choreographers, painters, video artists or theatre producers - he has challenged the dividing line between music and the visual. Or has investigated the effect of improvisation on already existing patterns of music.

Bretschneider's dossier starts at a completely different end of the art form as a self-taught, experimental musician and visual artist - an art student - behind the wall in the Berlin of the 1980s with the band AG Geige. Since the mid 1990s, he has performed solo under his name as well as under the alias KOMET and has more than 20 albums to his credit. He has also taken part in numerous projects with an audiovisual emphasis with, among others, Carsten Nicolai (alias Alva Noto), with whom he also shares the record company raster-noton. Bretschneider has, then, moved from the visual and collective to experimental work as an individual composer that is not far removed from Kanding's original -anchorage point.

The three works on this CD are the result of a cooperation between Bretschneider and Kanding over the past five years. One between Kanding, with his enquiring artistic nature that has often produced a highly expressive, dense music that has been inspired by, for example, such existential poetry at that of Rainer Maria Rilke, and Bretschneider, with his straightforward, pulsating nature that often balances between something one absolutely has to sit down and listen to in order to get best out of, and fluid rhythms that one could even dance the light fantastic to. In principle, at any rate.

The largest work on the CD is ‘Auxiliary Blue'. Originally, the piece was an audio-visual electronic work on(!) the Dexia skyscraper in Brussels created by Frank Bretschneider, but rewritten by Kanding for the Wundergrund festival in Copenhagen and Berlin in 2008 as an electro-acoustic piece for bass clarinet, percussion, violin, and double bass - i.e. the four musicians of Kanding's Contemporánea ensemble.

The forty-minute piece is stringently tight. The sound-universe is simple with repetitions time and again which, at one level of sound-image, establish a highly precise and recognisable listening space, while at other levels sounds emerge that challenge what already exists. For long stretches, it is not music with presentations and conclusions. It does not take place like, for example, classical music, where melodies or rhythms are worked through and rounded off. Instead of chapters with paragraphs and resolutions that move on to new ones, the music flows like series that are replaced by new ones. Gradual change rather than a form divided into sections. A third of the way through the music, the universe changes completely with a simple metallic sound (brake drum) that creates a new pulse, and halfway through, the music changes identity once again. This time it is the sound-space that opens up with crackling, electronic sounds in the background and the four acoustic instruments that go roving off. And during the last ten minutes the intensity gradually increases towards the final culmination. Even though the form is tight, there is something enquiring and almost romantically searching about the music even so. The melodies can perfectly well be delicate, singing violin notes or a striving clarinet that, with melancholic undertones, explores the electronically defined sound-space. Music, then, which is both highly old-fashioned in the way it explore the unknown, but within a framework of repetition and recognisability that is fairly new.

‘Difficult Shapes & Passive Rhythms' is the CD's darkest piece. Most people will probably say that the music reminds them of the city. The electronic sounds in themselves do that, but there is also something about the actual way the music is constructed that reminds one of an urban environment. The pulse is high and nervous, as in dense traffic, the sounds have sharp contours and are focused like objects made of metal or plastic - and although the piece becomes increasingly intense, there are plenty of small, mechanical repetitions that remind one of technology and industry.

The nine-minute electronic piece is Frank Bretschneider's adaptation, his remix, of one of Ejnar Kanding's orchestral pieces. The story behind it is simple: in 2006 Kanding requested Bretschneider to make a version of his dark orchestral piece with the drear title ‘Vergeuder der Schmerzen' (‘Squanderers of Pains') - taken from the 10th elegy of Rainer Maria Rilke's ‘Duino Elegies'. And Bretschneider came up with a version that owns the same melancholic atmosphere as Kanding's quiet, enquiring orchestral music.

But the expressive symphony orchestra sound when shifted over into Bretschneider's Berlin universe has acquired small, pulsating bass figures and quivering percussive rhythms as its driving force. While one was perhaps brought into a state of melancholy or passion when listening to Kanding, Bretschneider has added a dimension of the chase and of pulse. With the crackling universe of noises and electronic fog, Bretschneider's piece becomes an urban scene for distorted clarinet screeches and double basses with rusty sepulchral voices. It is fluid and stringent at one and the same time. Like the progressive rock surfaces of the 1960s, where really long, simple, almost meditative patterns are challenged by wild, soloist outbursts.

In the completely new piece ‘A Different Kind of Tension', the roles are reversed. Frank Bretschneider's electronic music has become the basis for a piece of electro-acoustic music where a percussionist works his way through a long series of quick rhythmic patterns supplemented by a discreet electronic sound side of small, crackling noises. The percussionist musician David Hildebrandt must be included as co-composer of the piece. There is not much else than a couple of different sized drums, a small piece of metal and a cow-bell, but they are exposed to beats and accents in constantly new combinations that open up new, discreet entities. Small nuances such as colourings, shadow effects or comments with electronic sounds of the type that arise when there is a fault in an electronic circuit - glitches.

As a composition it is simple. As music it is more challenging. On the one hand, it lends the easily understandable universe a mood that could easily remind one of lounge rhythms or ambient background music in night-clubs. On the other hand, it constantly provides new contexts and small shifts that the ear can easily follow - tight, cohesive musical minimalism like that which arose in USA in the 1960s. But with completely different electronic colours.

Henrik Friis has written about contemporary Danish music for the past ten years and at present contributes to the daily newspaper Politiken as a music critic.

Auxiliary Blue is supported by the Danish Arts Foundation